Use of AbobotulinumtoxinA for Cosmetic Treatments in the Neck, and Middle and Lower Areas of the Face: A Systematic Review
Next Article in Special Issue

Shellfish toxin monitoring programs often use mussels as the sentinel species to represent risk in other bivalve shellfish species. Studies have examined accumulation and depuration rates in various species, but little information is available to compare multiple species from the same harvest area. A 2-year research project was performed to validate the use of mussels as the sentinel species to represent other relevant eastern Canadian shellfish species (clams, scallops, and oysters). Samples were collected simultaneously from Deadmans Harbour, NB, and were tested for paralytic shellfish toxins (PSTs) and amnesic shellfish toxin (AST). Phytoplankton was also monitored at this site. Scallops accumulated PSTs and AST sooner, at higher concentrations, and retained toxins longer than mussels. Data from monitoring program samples in Mahone Bay, NS, are presented as a real-world validation of findings. Simultaneous sampling of mussels and scallops showed significant differences between shellfish toxin results in these species. These data suggest more consideration should be given to situations where multiple species are present, especially scallops.
Keywords: shellfish; marine toxins; monitoring; phytoplankton; sentinel species shellfish; marine toxins; monitoring; phytoplankton; sentinel species

Results from PST analyses of clams held in submerged cages were inconsistent with the results from all other species in this study and did not demonstrate any peak in toxin level (Figure A1). This could be explained by a number of factors, including that the clams were not in their natural environment (tidal mud flats), experienced more turbulent oceanographic conditions, or had altered feeding rates due to stocking density or fouling of cages. Appendix A includes a detailed rational for excluding soft-shell clam results from this study, including analysis of long-term comparison of mussel and soft-shell clams at another CSSP monitoring site (Table A1). The original study design was to compare PST concentrations between samples from experimental cages, and to use the sample results from the natural clam bed as validation of the results; instead, the results from the natural clam bed were used to exclude soft-shell clam data.
Figure 2 shows PST results from multiple shellfish species. All species accumulated some PSTs during the project, but oysters were the only species in which PST concentrations never exceeded the ML. The PST concentrations in mussels changed rapidly and coincided with the rise and fall of adjacent A. catenella cell counts (Figure 2). Scallop samples exceeded the ML before mussel samples during the toxic episodes in 2013 and 2014, and provided the earliest warning of increasing PST levels. Analysis of shellfish before the project began confirmed no PSTs were present in any species, and eliminated the possibility of contamination from previous toxic episodes.
Oyster PST concentrations remained significantly lower than mussels and scallops, and there was a delay in observable PST concentrations in oysters relative to mussels and scallops. Figure 3 shows that the PST concentrations in mussels began to increase as surface water temperatures increased in late April/early May.
The highest AST levels were detected in scallops, which were the only species to exceed the ML (Figure 4). Mussel samples also contained AST, but for a much shorter duration: 6 days in mussels vs. 175 days in scallops. Only a single oyster sample had detectable AST levels during the same time period.

The total phytoplankton community was analyzed as part of a long-term dataset initiated in 1988, which provided the opportunity to capture a weekly picture of species initiation, development, and decline [46]. The subset of A. catenella cell concentrations showed a strong temporal correlation with PST presence in shellfish (Figure 2), while cell counts showed no correlation with PST concentrations in shellfish, as has been observed in previous Bay of Fundy studies [19,47]. Low levels of PSP toxicity can be detected at very low concentrations of A. catenella (20–40 cells/L). The A. catenella cell counts changed more rapidly than the shellfish toxin levels. This may have been due to physical oceanography, bloom (duration, intensity and toxicity), very low numbers resulting in shellfish toxicity, patchiness of the cell distributions, the fact that A. catenella is often not the dominant phytoplankton species in the community and shellfish can selectively feed on other species, and/or retention and conversion of toxins in shellfish for extended periods. Weekly sampling for A. catenella indicates that this frequency of sampling is sufficient to provide an indication of increasing PSTs in tissues. Following the bloom, an absence of A. catenella cells within the water column indicates that the shellfish have the potential to depurate and PST concentrations can decrease. This absence of cells can act as a signal to increase PST analyses in order to measure the decline in toxins and determine the timing for the safe marketing of shellfish. Pseudo-nitzschia pseudodelicatissima cell counts were not available for 2014.

Samples obtained from two sites in Mahone Bay, NS, highlighted significant differences in LST concentrations between scallops and mussels. At one site (Indian Point), LST levels were 10 × higher in mussels than in scallops, while at the other site (Snake Island), scallop LST levels were higher (Figure 5). It is also noteworthy that scallops did not retain LST for an extended time as they did for PST and AST.
The only LST toxins detected were dinophysistoxin-1 (DTX1) and DTX1 esters; no OA or DTX2 were detected. Mussel samples were contaminated with both free and esterified forms of DTX1, with esterified forms contributing an average of 51% of the total toxicity (ranging from 32–100%) (Figure 6). No free DTX1 was detected in scallops; all toxins observed in scallops were present in the esterified form. The data in Figure 6 are displayed by species (combination of Indian Point and Snake Island samples); no differences in esterification rates were detected between those sites.
The AST results from Mahone Bay, NS are presented in Figure 7. The onset of toxicity in scallops was not captured, because mussels and scallops were not sampled simultaneously until AST was detected. These data show that scallops accumulated higher AST concentrations than mussels, and scallops also retained the toxin over a much greater period of time than mussels. Scallops and mussels were both tested and found to have no toxins one month before AST was detected (markers visible on x-axis indicate sampling events when no toxins were detected); this is significant because it confirms that AST detected in shellfish were a result of a new contamination, not residual levels from previous exposures.
Raw data from all figures is available in the Supplementary Materials.

Mussels have been used as the sentinel species in Atlantic Canadian shellfish toxin monitoring programs for many years. These samples and programs have generally protected consumers from illnesses related to shellfish toxins. Additional context may be necessary if there are multiple species in the same harvest area, where additional species may need to be sampled along with mussels to evaluate the food safety risk associated with each species.

All testing was completed using validated methods in an ISO 17025 accredited laboratory.

Shellfish (blue mussels, soft-shell clams, Atlantic sea scallops, and eastern oysters) were harvested from other areas, tested to ensure they contained no toxins when transferred, and then allowed to acclimate to conditions in Deadmans Harbour, NB for at least 3 weeks before being sampled. Shellfish were kept in submerged cages on the ocean floor for the research project in Deadmans Harbour, NB (2013–2015). Shellfish were sampled simultaneously, and sampling frequency ranged from weekly in summer to monthly in winter, according to PST risk and CSSP sampling frequency.
The retention of PSTs in various scallop tissues has been documented for a long time [1,55,56]. Atlantic sea scallop (Placopecten magellanicus) adductor muscles are commonly consumed in Canada (not whole scallops) and lower (or no) PST levels are present in Atlantic sea scallop adductor muscle compared to whole scallops which contain digestive materials that accumulate toxins. Whole scallops were analyzed in this study to assess toxin concentrations, and because whole tissue is the easiest tissue to use for regulatory monitoring.
Samples of mussels and scallops were obtained from aquaculture operations in Mahone Bay, NS in support of CSSP monitoring.
Water samples (250 mL) were collected weekly (although not always on the same day as shellfish samples) for phytoplankton analysis from the surface in close proximity to the suspended cages and preserved with 2.5% formalin acetic acid (FAA) (Fisher Scientific, Nepean, ON, Canada). Later, 50 mL subsamples were settled in counting chambers for 16 h and the whole surface area was counted and enumerated for total phytoplankton community, including A. catenella and P. pseudodelicatissima concentrations (as cells/L or chains of cells/L) using a Nikon inverted microscope (Nikon Instruments, Melville, NY, USA). A vertical 20 µm mesh phytoplankton 30 cm net sample was collected, preserved with FAA for qualitative analysis of dominant phytoplankton (as well as harmful) species using a compound Nikon microscope (Nikon Instruments, Melville, NY, USA).

Instrument solvents, test reagents, and chemicals for the analysis of all sample types were either HPLC- or LC-MS-grade, as appropriate for the assay. Certified reference materials (CRMs) used for preparing instrumental calibrants were all obtained from Biotoxin Metrology, NRCC, Halifax, Canada.

Samples of shellfish were shucked and extracted following internal laboratory protocols prior to analysis for marine toxins. Subsamples of the tissue homogenates were extracted as noted below. Whole shellfish tissue was analyzed in all cases.

All AST testing was conducted on subsamples of tissue homogenate by LC-UV using an in-house method based on [13,14]. Analyses were carried out with an Agilent 1290 UHPLC system (Agilent Technologies, Kirkland, PQ, Canada) with UV-diode array detection. Tissue homogenate was weighed (5 ± 0.25 g) into a 50 mL polypropylene centrifuge tube. Then, 5.0 mL water was added, the mixture was vortexed before adding 10.0 mL methanol (Caledon Laboratories, Georgetown, ON, Canada). The mixture was vortexed again and then centrifuged at ≥1000 g for 10 min. Approximately 1.5 mL resulting supernatant was filtered through a 0.2 µm nylon syringe filter. Filtered sample extract (750 µL) was transferred to an autosampler vial and diluted with 750 µL water, and vortexed. Injections of 2 µL were performed on a Waters Acquity UPLC BEH C18, 1.7 µM, 2.1 × 50 mm column (Waters Limited, Taunton, MA, USA) at 50 °C, and a flow rate of 0.7 mL/min. Mobile phase A was water + 0.1% formic acid (Sigma-Aldrich Canada, Oakville, ON, Canada), and mobile phase B was acetonitrile (Caledon Laboratories, Georgetown, ON, Canada) + 0.1% formic acid. AST was eluted during a 1.2 min isocratic hold at 8% mobile phase B, and this was followed by a 0.5 min isocratic hold at 50% mobile phase B to flush the column, and 0.3 min isocratic hold at 8% mobile phase B to re-equilibrate at starting conditions for the next injection. AST peaks were measured at 242 nm and confirmed by spectral comparison with external calibration standards. The method LOD was 0.7 mg/kg shellfish tissue. AST analogues included domoic acid and epi-domoic acid.

The data presented in this study are available in supplementary material. 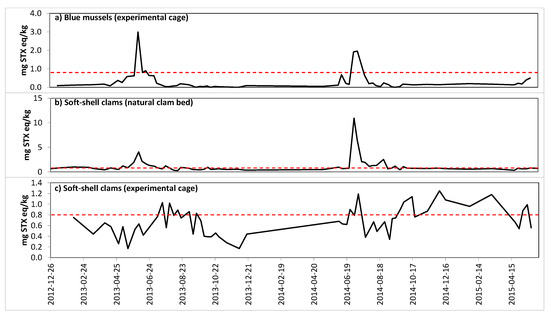 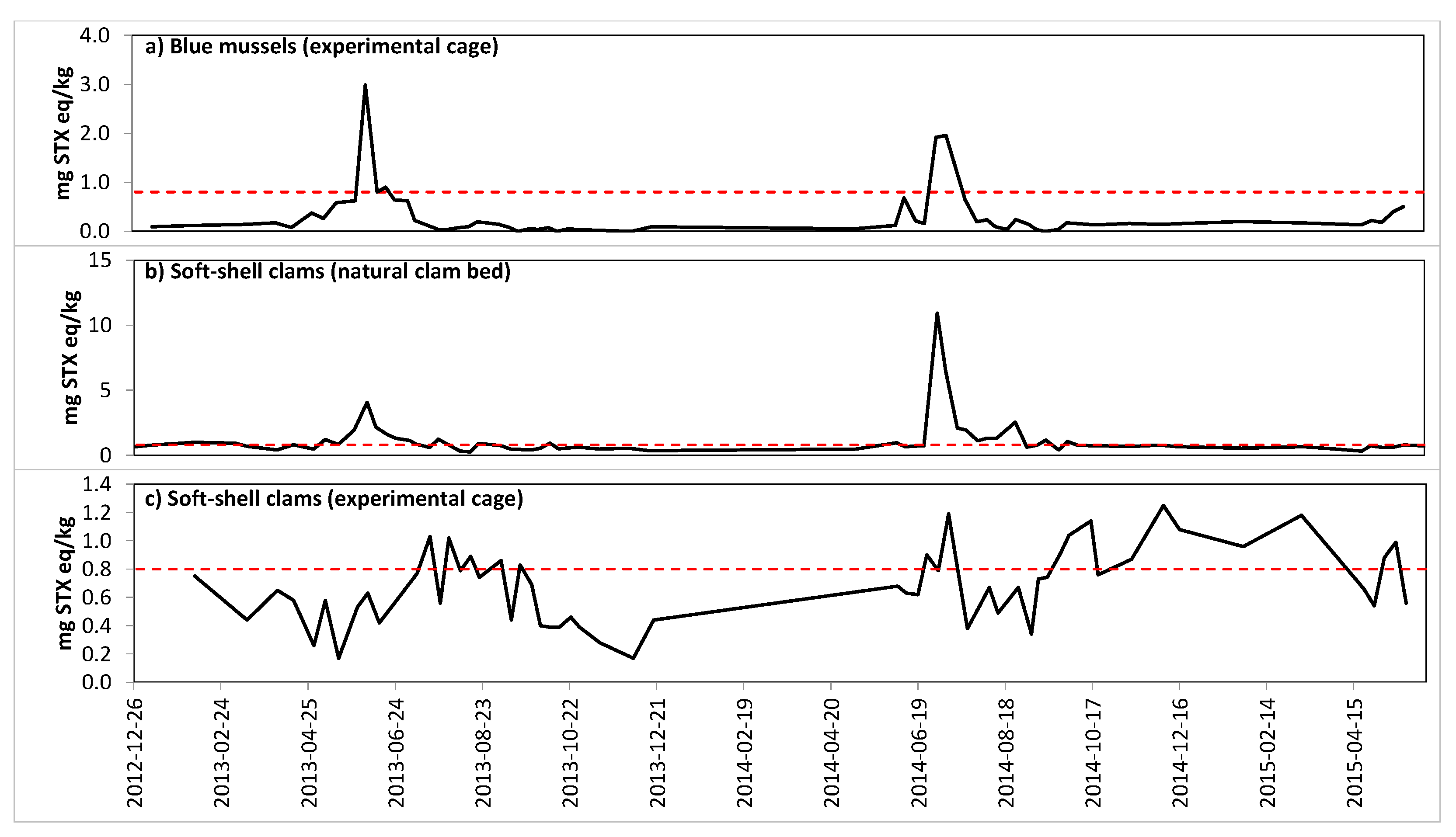 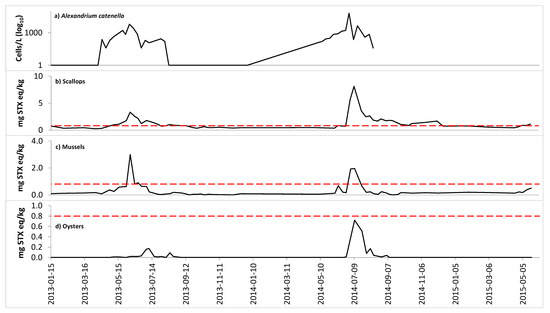 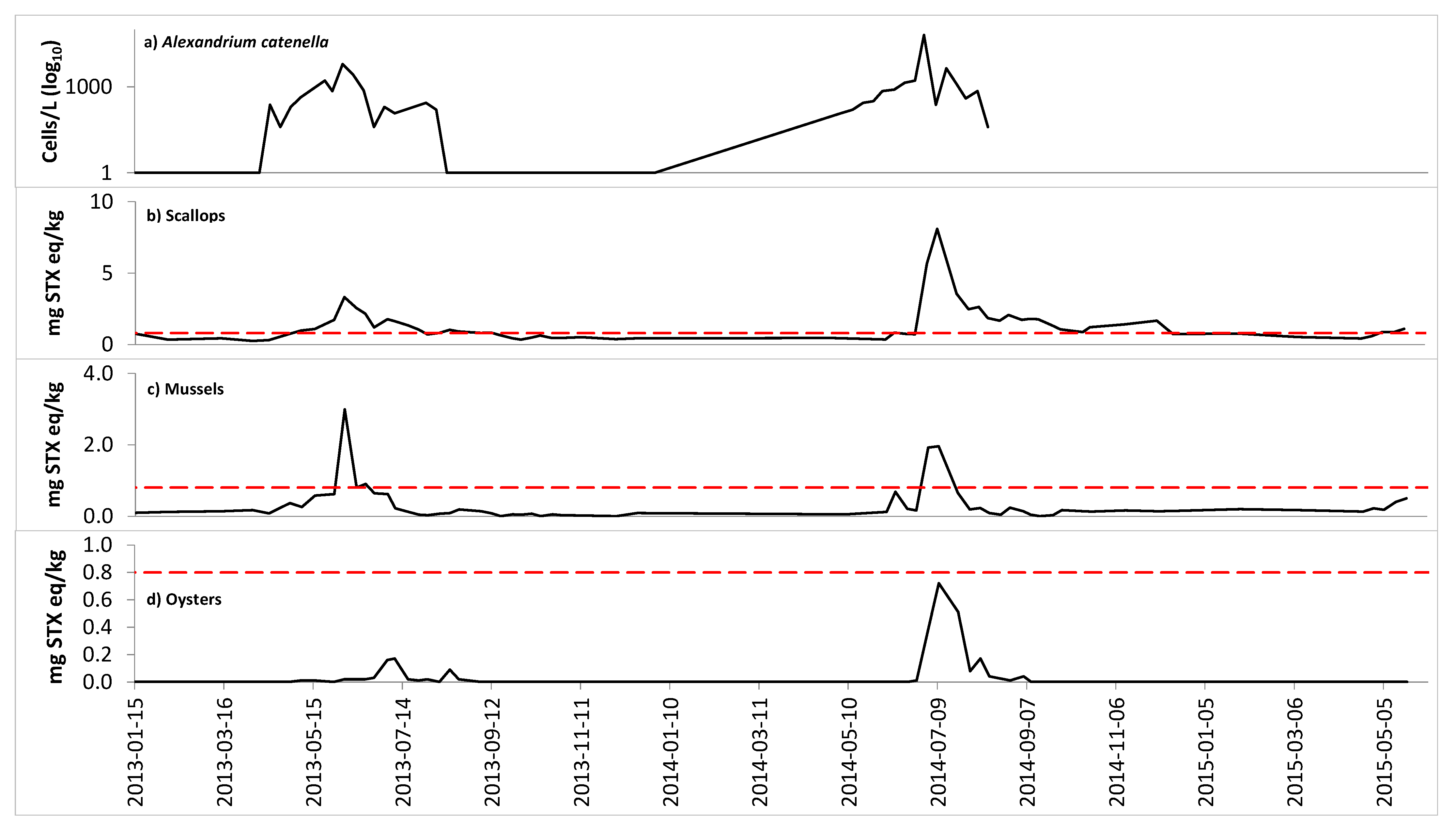 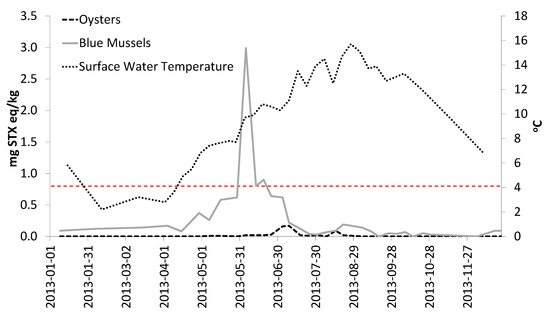 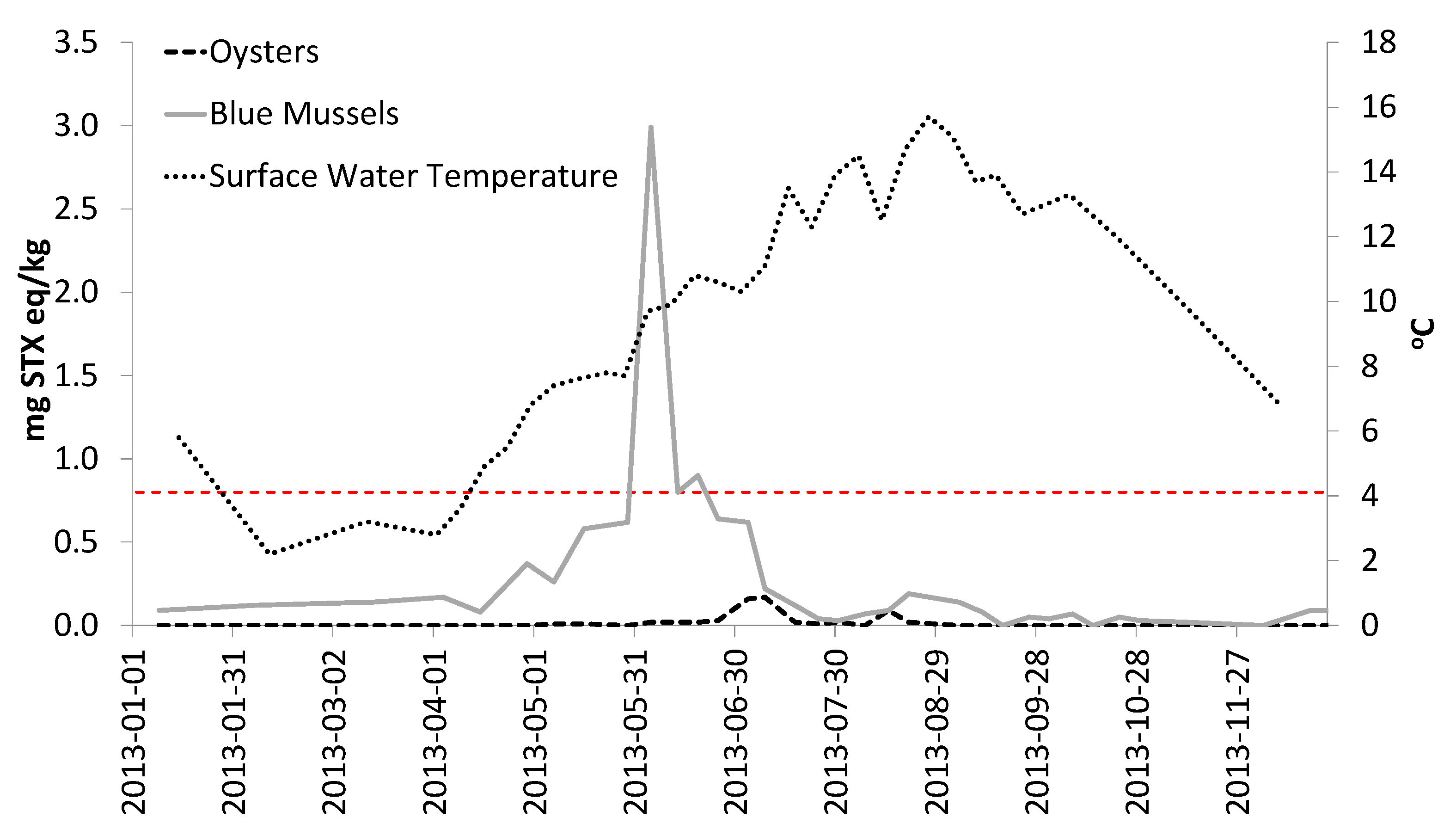 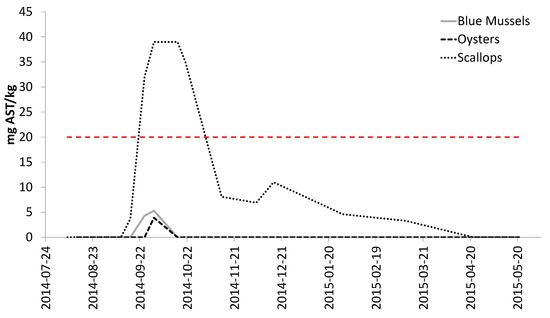 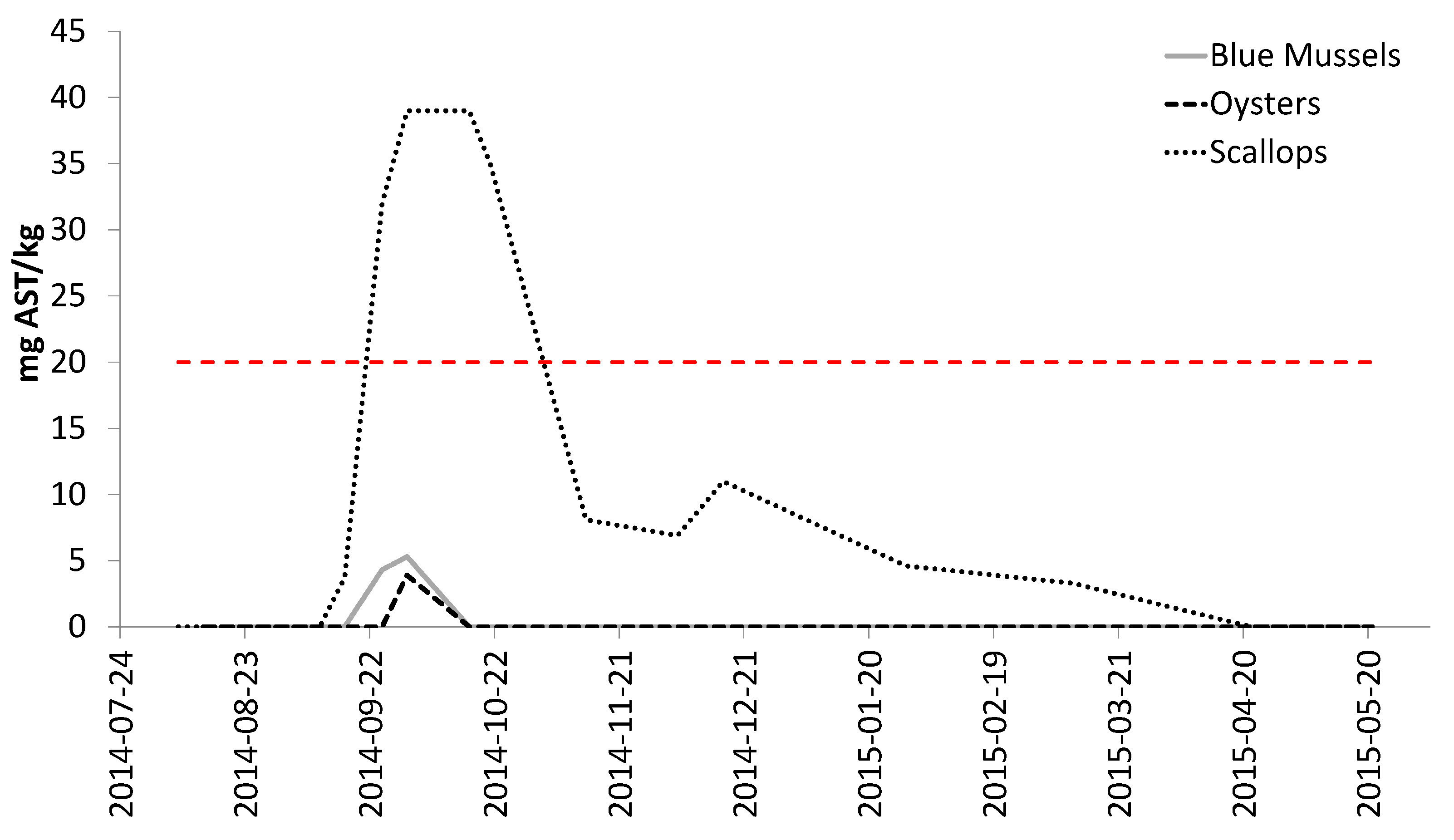