The growing number of known venomous marine invertebrates indicates that chemical warfare plays an important role in adapting to diversified ecological niches, even though it remains unclear how toxins fit into the evolutionary history of these animals. Our case study, the Polychaeta Eulalia sp., is an intertidal predator that secretes toxins. Whole-transcriptome sequencing revealed proteinaceous toxins secreted by cells in the proboscis and delivered by mucus. Toxins and accompanying enzymes promote permeabilization, coagulation impairment and the blocking of the neuromuscular activity of prey upon which the worm feeds by sucking pieces of live flesh. The main neurotoxins (“phyllotoxins”) were found to be cysteine-rich proteins, a class of substances ubiquitous among venomous animals. Some toxins were phylogenetically related to Polychaeta, Mollusca or more ancient groups, such as Cnidaria. Some toxins may have evolved from non-toxin homologs that were recruited without the reduction in molecular mass and increased specificity of other invertebrate toxins. By analyzing the phylogeny of toxin mixtures, we show that Polychaeta is uniquely positioned in the evolution of animal venoms. Indeed, the phylogenetic models of mixed or individual toxins do not follow the expected eumetazoan tree-of-life and highlight that the recruitment of gene products for a role in venom systems is complex. View Full-Text
Keywords: Annelida; marine environment; protein recruitment; selective pressure; toxins; whole-transcriptome sequencing Annelida; marine environment; protein recruitment; selective pressure; toxins; whole-transcriptome sequencing
►▼ Show Figures 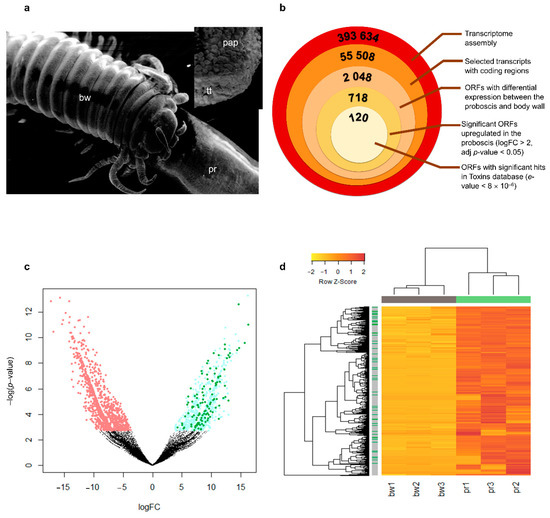