Transcriptome Analysis Reveals the AhR, Smad2/3, and HIF-1α Pathways as the Mechanism of Ochratoxin A Toxicity in Kidney Cells
Next Article in Special Issue

Coffee Silverskin and Spent Coffee Suitable as Neuroprotectors against Cell Death by Beauvericin and α-Zearalenol: Evaluating Strategies of Treatment

Zearalenone (ZEN) is a mycotoxin that has been reported to damage various types of cells/tissues, yet its effects on endothelial cells (ECs) have never been investigated. Therefore, this study investigates the potential effects of ZEN using bovine aortic ECs (BAECs). In this study, we found that ZEN induced apoptosis of BAECs through increased cleavage of caspase 3 and poly ADP-ribose polymerase (PARP). ZEN also increased phosphorylation of ERK1/2 and p53, and treatment with the ERK1/2 or p53 inhibitor reversed ZEN-induced EC apoptosis. Transfection of BAECs with small interfering RNA against ERK1/2 or p53 revealed ERK1/2 as an upstream target of p53 in ZEN-stimulated apoptosis. ZEN increased the production of reactive oxygen species (ROS), yet treatment with the antioxidant did not prevent EC apoptosis. Similarly, blocking of estrogen receptors by specific inhibitors also did not prevent ZEN-induced apoptosis. Finally, chelation of cytosolic calcium (Ca2+) using BAPTA-AM or inhibition of endoplasmic reticulum (ER) Ca2+ channel using 2-APB reversed ZEN-induced EC apoptosis, but not by inhibiting ER stress using 4-PBA. Together, our findings demonstrate that ZEN induces EC apoptosis through an ERK1/2/p53/caspase 3 signaling pathway activated by Ca2+ release from the ER, and this pathway is independent of ROS production and estrogen receptor activation. View Full-Text
Keywords: mycotoxin; zearalenone; apoptosis; endothelial cells; calcium mycotoxin; zearalenone; apoptosis; endothelial cells; calcium
►▼ Show Figures 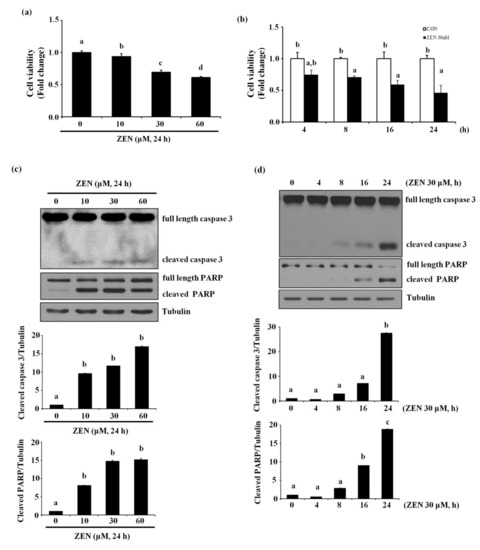