Zearalenone (ZEA) is a mycotoxin widely occurring in many agricultural commodities. In this study, a purified bacterial isolate, Bacillus sp. S62-W, obtained from one of 104 corn silage samples from various silos located in the United States, exhibited activity to transform the mycotoxin ZEA. A novel microbial transformation product, ZEA-14-phosphate, was detected, purified, and identified by HPLC, LC-MS, and NMR analyses. The isolate has been identified as belonging to the genus Bacillus according to phylogenetic analysis of the 16S rRNA gene and whole genome alignments. The isolate showed high efficacy in transforming ZEA to ZEA-14-phosphate (100% transformation within 24 h) and possessed advantages of acid tolerance (work at pH = 4.0), working under a broad range of temperatures (22–42 °C), and a capability of transforming ZEA at high concentrations (up to 200 µg/mL). In addition, 23 Bacillus strains of various species were tested for their ZEA phosphorylation activity. Thirteen of the Bacillus strains showed phosphorylation functionality at an efficacy of between 20.3% and 99.4% after 24 h incubation, suggesting the metabolism pathway is widely conserved in Bacillus spp. This study established a new transformation system for potential application of controlling ZEA although the metabolism and toxicity of ZEA-14-phosphate requires further investigation. View Full-Text
Keywords: zearalenone; microbial transformation; phosphorylation; silage; Bacillus zearalenone; microbial transformation; phosphorylation; silage; Bacillus
►▼ Show Figures 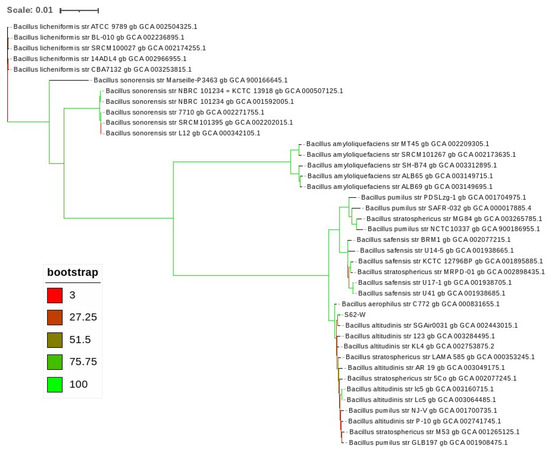