In recent years, conjugated mycotoxins have gained increasing interest in food safety, as their hydrolysis in human and animal intestines leads to an increase in toxicity. For the production of zearalenone (ZEN) glycosides reference standards, we applied Cunninghamellaelegans and Cunninghamella echinulata fungal strains. A sulphate-depleted medium was designed for the preferred production of ZEN glycosides. Both Cunninghamella strains were able to produce zearalenone-14-β-D-glucopyranoside (Z14G), zearalenone-16-β-D-glucopyranoside (Z16G) and zearalenone-14-sulphate (Z14S). In a rich medium, Cunninghamellaelegans preferably produced Z14S, while Cunninghamellaechinulata preferably produced Z14G. In the sulphate-depleted medium a dramatic change was observed for Cunninghamellaelegans, showing preferred production of Z14G and Z16G. From 2 mg of ZEN in sulphate-depleted medium, 1.94 mg of Z14G and 0.45 mg of Z16G were produced. Following preparative Liquid Chromatography-Mass Spectrometry (LC-MS) purification, both fractions were submitted to 1H and 13C NMR and High-Resolution Mass Spectrometry (HRMS). These analyses confirmed that the purified fractions were indeed Z14G and Z16G. In conclusion, the presented research shows that a single Cunninghamella strain can be an effective and efficient tool for the controlled biotransformation of ZEN glycosides and other ZEN metabolites. Additionally, the biotransformation method was extended to zearalanone, β-zearalenol and other mycotoxins. View Full-Text
Keywords: modified mycotoxins; zearalenone; zearalanone; β-zearalenol; conjugated; masked; fungi; Cunninghamella; biotransformation modified mycotoxins; zearalenone; zearalanone; β-zearalenol; conjugated; masked; fungi; Cunninghamella; biotransformation
►▼ Show Figures 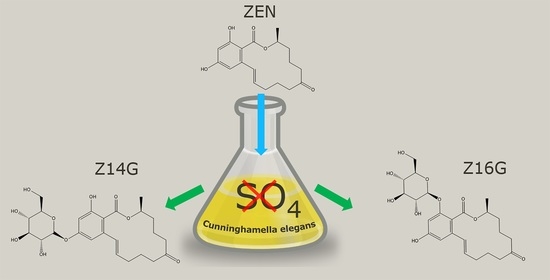