The Snake Study: Survey of National Attitudes and Knowledge in Envenomation
Next Article in Special Issue

Deoxynivalenol (DON) is a major mycotoxin with high toxicity that often contaminates grains, foods and feeds. The traditional approaches for DON removal are difficult to meet industry and agriculture demands due to the high stability of the DON molecule. Therefore, there is an urgent need to develop green and effective strategies for DON degradation. In this study, a batch of photocatalytic nanomaterials of cerium (Ce) doped titanium dioxide (TiO2) were successfully prepared by sol-gel method. The catalysts were systematically characterized by XRD, HRTEM, FT-IR, UV-Vis and XPS. The catalyst 0.5Ce-TiO2 showed superior photocatalytic activity for DON degradation in aqueous solution under ultraviolet light irradiation, better than that of traditional photocatalyst pure TiO2, and 96% DON with initial concentration of 5.0 mg/L could be degraded in 4 h. In addition, the two possible degradation intermediate products C5H8O3 and C17H18O6 were identified, the photocatalytic degradation mechanism and degradation pathway were studied. The results indicate that Ce doped TiO2 photocatalyst can be used to reduce DON effectively. View Full-Text
Keywords: deoxynivalenol; photocatalytic degradation; cerium doped titanium dioxide; mechanism; pathway deoxynivalenol; photocatalytic degradation; cerium doped titanium dioxide; mechanism; pathway
►▼ Show Figures 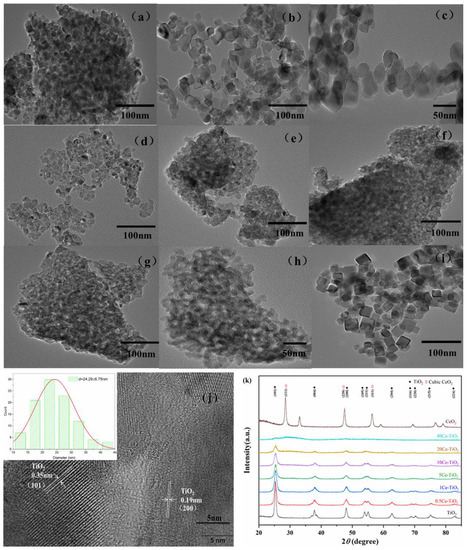