Real-World Dosing of OnabotulinumtoxinA and IncobotulinumtoxinA for Cervical Dystonia and Blepharospasm: Results from TRUDOSE and TRUDOSE II
Next Article in Special Issue

Bioactive Components of Pomegranate Oil and Their Influence on Mycotoxin Secretion

Mycotoxins are secondary metabolites that are produced by molds during their development. According to fungal physiological particularities, mycotoxins can contaminate crops before harvest or during storage. Among toxins that represent a real public health issue, those produced by Fusarium genus in cereals before harvest are of great importance since they are the most frequent in European productions. Among them, deoxynivalenol (DON) and fumonisins (FUM) frequently contaminate maize. In recent years, numerous studies have investigated whether food processing techniques can be exploited to reduce the levels of these two mycotoxins, which would allow the identification and quantification of parameters affecting mycotoxin stability. The particularity of the popcorn process is that it associates heat treatment with a particular physical phenomenon (i.e., expansion). Three methods exist to implement the popcorn transformation process: hot air, hot oil, and microwaves, all of which are tested in this study. The results show that all popping modes significantly reduce FUM contents in both Mushroom and Butterfly types of popcorn. The mean initial contamination of 1351 µg/kg was reduced by 91% on average after popping. For DON, the reduction was less important despite a lower initial contamination than for FUM (560 µg/kg). Only the hot oil popping for the Mushroom type significantly reduced the contamination up to 78% compared to unpopped controls. Hot oil popping appears to provide the most important reduction for the two considered mycotoxins for both types of popcorn (−98% and −58% average reduction for FUM and DON, respectively). View Full-Text
Keywords: deoxynivalenol; fumonisins; popcorn; popping; mycotoxins reduction deoxynivalenol; fumonisins; popcorn; popping; mycotoxins reduction
►▼ Show Figures 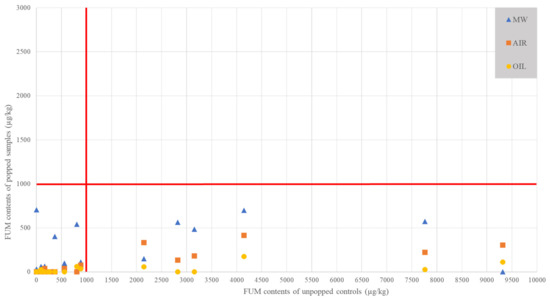