Ciguatera in the Indian Ocean with Special Insights on the Arabian Sea and Adjacent Gulf and Seas: A Review
Next Article in Special Issue

Bacterial Toxins Active against Mosquitoes: Mode of Action and Resistance

Shrimp, as a high-protein animal food commodity, are one of the fastest growing food producing sectors in the world. It has emerged as a highly traded seafood product, currently exceeding 8 MT of high value. However, disease outbreaks, which are considered as the primary cause of production loss in shrimp farming, have moved to the forefront in recent years and brought socio-economic and environmental unsustainability to the shrimp aquaculture industry. Acute hepatopancreatic necrosis disease (AHPND), caused by Vibrio spp., is a relatively new farmed penaeid shrimp bacterial disease. The shrimp production in AHPND affected regions has dropped to ~60%, and the disease has caused a global loss of USD 43 billion to the shrimp farming industry. The conventional approaches, such as antibiotics and disinfectants, often applied for the mitigation or cure of AHPND, have had limited success. Additionally, their usage has been associated with alteration of host gut microbiota and immunity and development of antibiotic resistance in bacterial pathogens. For example, the Mexico AHPND-causing V. parahaemolyticus strain (13-306D/4 and 13-511/A1) were reported to carry tetB gene coding for tetracycline resistance gene, and V. campbellii from China was found to carry multiple antibiotic resistance genes. As a consequence, there is an urgent need to thoroughly understand the virulence mechanism of AHPND-causing Vibrio spp. and develop novel management strategies to control AHPND in shrimp aquaculture, that will be crucially important to ensure food security in the future and offer economic stability to farmers. In this review, the most important findings of AHPND are highlighted, discussed and put in perspective, and some directions for future research are presented. View Full-Text
Keywords: shrimp aquaculture; AHPND; V. parahaemolyticus; virulence mechanism; management strategies shrimp aquaculture; AHPND; V. parahaemolyticus; virulence mechanism; management strategies
►▼ Show Figures 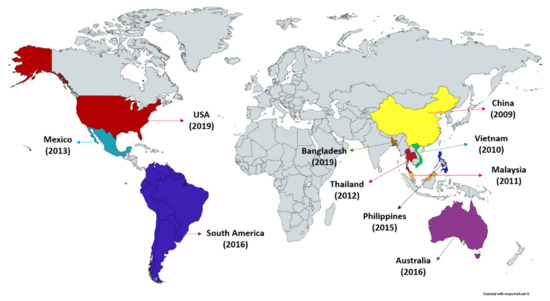