The mussel Mytilus galloprovincialis is one of the most important aquaculture species in Europe. Its main production problem is the accumulation of toxins during coastal blooms, which prevents mussel commercialization. P-glycoprotein (ABCB1/MDR1/P-gp) is part of the multixenobiotic resistance system in aquatic organisms, and okadaic acid, the main DSP toxin, is probably a substrate of the P-gp-mediated efflux. In this study, the presence and possible role of P-gp in the okadaic acid detoxification process was studied in M. galloprovincialis. We identified, cloned, and characterized two complete cDNAs of mdr1 and mdr2 genes. MgMDR1 and MgMDR2 predicted proteins had the structure organization of ABCB full transporters, and were identified as P-gp/MDR/ABCB proteins. Furthermore, the expression of mdr genes was monitored in gills, digestive gland, and mantle during a cycle of accumulation-elimination of okadaic acid. Mdr1 significantly increased its expression in the digestive gland and gills, supporting the idea of an important role of the MDR1 protein in okadaic acid efflux out of cells in these tissues. The expression of M. galloprovincialismrp2, a multidrug associated protein (MRP/ABCC), was also monitored. As in the case of mdr1, there was a significant induction in the expression of mrp2 in the digestive gland, as the content of okadaic acid increased. Thus, P-gp and MRP might constitute a functional defense network against xenobiotics, and might be involved in the resistance mechanisms to DSP toxins. View Full-Text
Keywords: P-glycoprotein; mdr; mrp; ABC transporters; DSP toxins; MXR P-glycoprotein; mdr; mrp; ABC transporters; DSP toxins; MXR
►▼ Show Figures 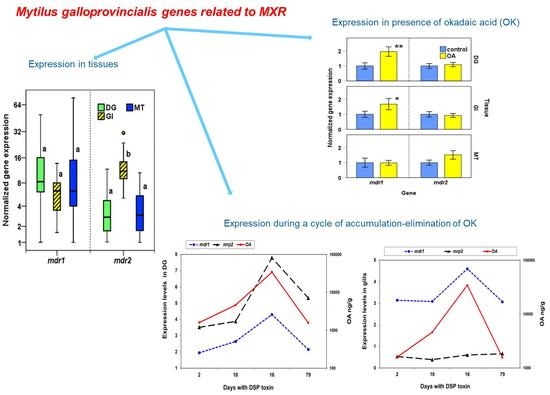