Currencies of Mutualisms: Sources of Alkaloid Genes in Vertically Transmitted Epichloae
Next Article in Special Issue

Limited Stability of Microcystins in Oligopeptide Compositions of Microcystis aeruginosa (Cyanobacteria): Implications in the Definition of Chemotypes
Previous Article in Journal

A two and a half year old spayed female Miniature Australian Shepherd presented to a Montana veterinary clinic with acute onset of anorexia, vomiting and depression. Two days prior, the dog was exposed to an algal bloom in a community lake. Within h, the animal became lethargic and anorexic, and progressed to severe depression and vomiting. A complete blood count and serum chemistry panel suggested acute hepatitis, and a severe coagulopathy was noted clinically. Feces from the affected dog were positive for the cyanobacterial biotoxin, microcystin-LA (217 ppb). The dog was hospitalized for eight days. Supportive therapy consisted of fluids, mucosal protectants, vitamins, antibiotics, and nutritional supplements. On day five of hospitalization, a bile acid sequestrant, cholestyramine, was administered orally. Rapid clinical improvement was noted within 48 h of initiating oral cholestyramine therapy. At 17 days post-exposure the dog was clinically normal, and remained clinically normal at re-check, one year post-exposure. To our knowledge, this is the first report of successful treatment of canine cyanobacterial (microcystin) toxicosis. Untreated microcystin intoxication is commonly fatal, and can result in significant liver damage in surviving animals. The clinical success of this case suggests that oral administration of cholestyramine, in combination with supportive therapy, could significantly reduce hospitalization time, cost-of-care and mortality for microcystin-poisoned animals
Keywords: acute hepatitis; blue-green algae; cholestyramine; cyanobacteria; hepatotoxin; microsystin; poisoning; silibinin acute hepatitis; blue-green algae; cholestyramine; cyanobacteria; hepatotoxin; microsystin; poisoning; silibinin

Death from microcystin intoxication has been reported in fish [1,2], birds [2,3], companion animals [4,5,6], livestock [7,8], wildlife [9,10] and humans [11,12], and significant blooms can cause widespread morbidity and mortality [13]. Microcystins are structurally diverse cyclic heptapeptides that are primarily considered as hepatotoxins [14], although the gastrointestinal tract, kidney and other organs are also susceptible to toxin-mediated damage [15]. Human and animal exposure to microcystin typically occurs through ingestion of contaminated water or food, or by licking contaminated fur. 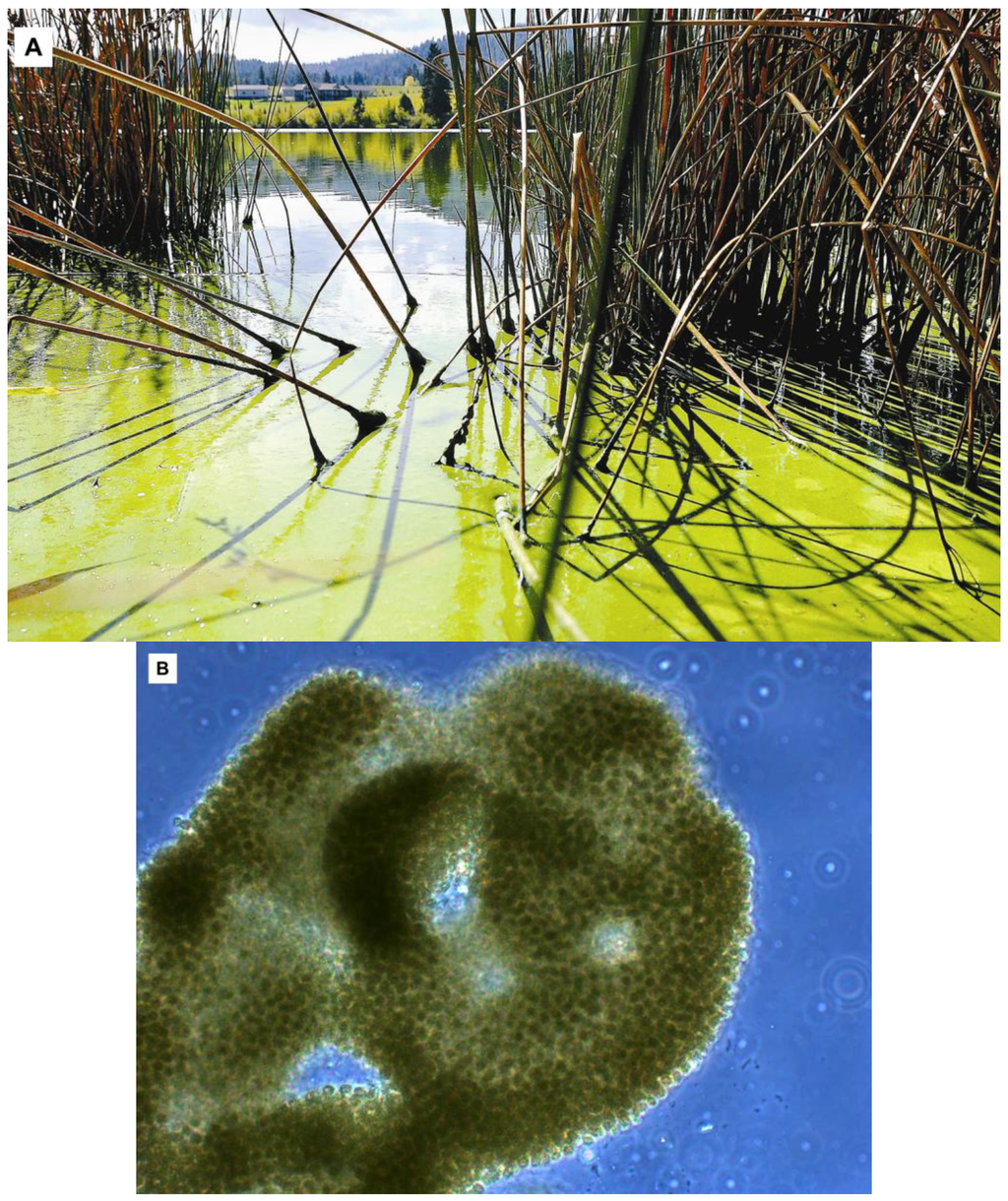 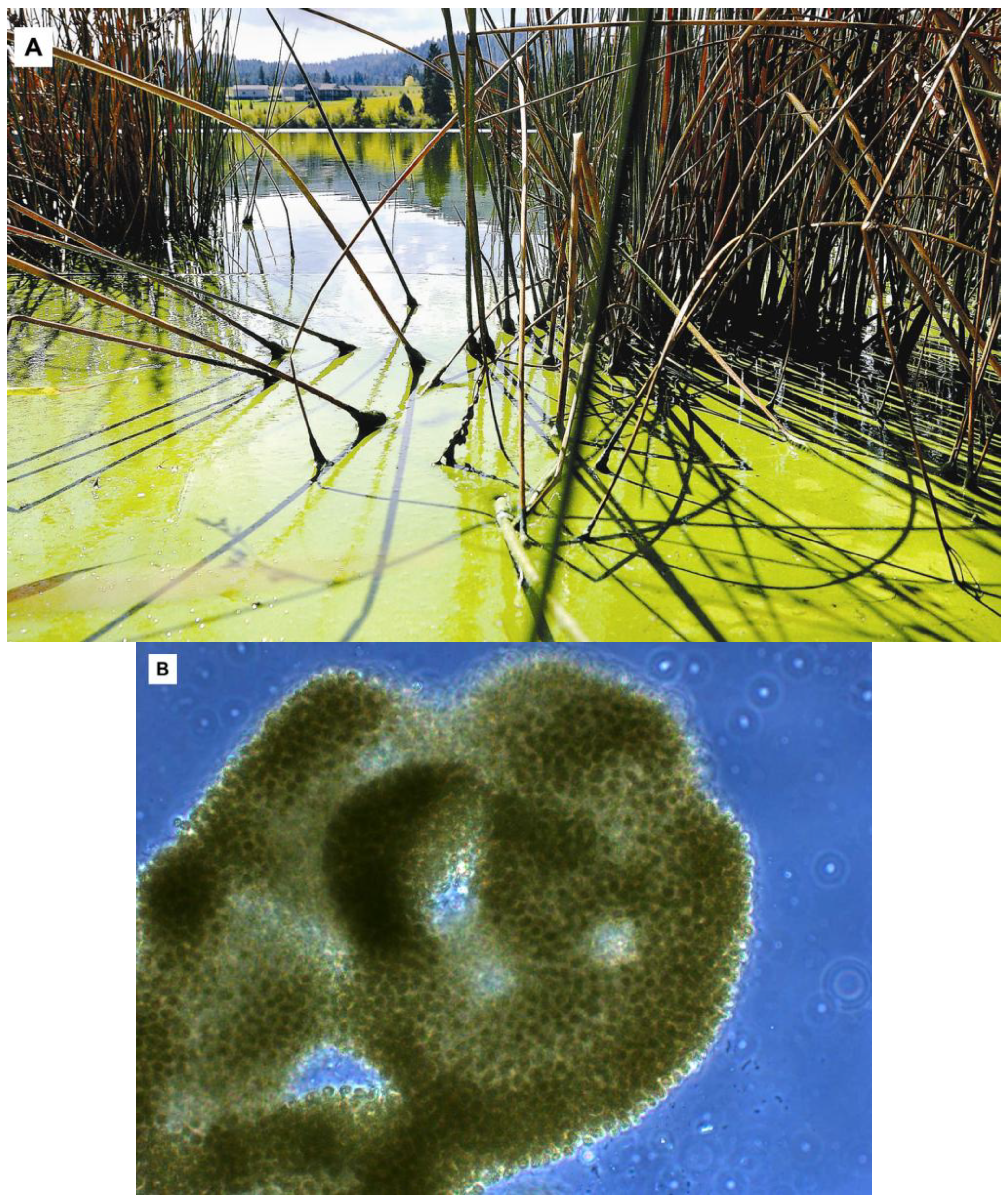 In this case report a two and a half year old 11.6 kg (25.5 lb) spayed female Miniature Australian Shepherd presented on 13 September 2010, to the Flathead Animal Clinic in Kalispell, Montana, with an acute onset of anorexia, vomiting and profound depression. Two days prior to hospitalization, the dog was with her owners at Middle Foy Lake, a small (14 ha (0.05 mi2)), shallow lake located near Kalispell, northwest Montana. Middle Foy Lake is located adjacent to a small housing development and is used for recreation and fishing, and it is periodically stocked with rainbow trout. On the day of this visit, Middle Foy Lake contained a prominent, bright green algal surface scum (Figure 1A). The dog walked through this algal scum, and was observed by the owners to be drinking the pond water and licking water and algal scum from her fur coat. Within h of exposure, lethargy and anorexia developed, and then rapidly progressed to severe depression and vomiting.

At the time of hospitalization, the dog was vomiting, anorexic and depressed. She was afebrile, 38.4 °C (101.2° F), with pink mucus membranes and a capillary refill time of <2 s. Abdominal palpation did not elicit pain, and no evidence of loose stool was noted. A complete blood count and serum chemistry panel revealed lymphopenia, thrombocytopenia and profound elevations of total bilirubin, alanine aminotransferase (ALT) and alkaline phosphatase (ALP) (Table 1). Intravenous fluid therapy (IV) (0.9% sodium chloride) was initiated at 200 mL/h for twenty minutes, and then lowered to a maintenance rate of 30 mL/h (approximately 60 mL/kg/day (27.3 mL/lb/day)). Denosyl (Nutramax Laboratories, Inc., Edgewood, MD, USA), a nutritional supplement containing S-Adenosylmethionine (SAM-e) was administered (20 mg/kg (8.8 mg/lb), per os (PO), q 24 h). SAM-e (S-adenosylmethionine) is formed from methionine and adenosine triphosphate (ATP). It acts as a methyl group donor to facilitate cellular biochemical reactions and may help reduce cholestasis. Anti-inflammatory and analgesic activity has also been attributed to SAM-e. An attempt to assess clotting parameters was unsuccessful and resulted in severe hemorrhage at the venipuncture site.

The authors thank Peter Fimrite of the San Francisco Chronicle for connecting Rankin and Miller and helping establish this collaboration, and the Daily Inter Lake of Kalispell, Montana, for use of their photographs. We also thank Gwen H. Burtch from the Flathead Animal Clinic of Kalispell, Montana, for assistance with medical record accession and fact checking. Partial funding for the analyses was provided by California Regional Water Quality Control Board contract 07-102-250-03. Finally, we thank “Annabelle” and her owners for allowing us to share their story for the benefit of others.