Polyketides, Toxins and Pigments in Penicillium marneffei
Next Article in Special Issue

Acetylcholinesterase in Biofouling Species: Characterization and Mode of Action of Cyanobacteria-Derived Antifouling Agents

Thus far, the negative effects of Nodularia spumigena blooms on aquatic organisms have been mainly attributed to the production of the hepatotoxic nodularin (NOD). In the current work, the accumulation of other N. spumigena metabolites in blue mussels and crustaceans, and their effect on Thamnocephalus platyurus and Artemia franciscana, were examined. The liquid chromatography-tandem mass spectrometry (LC-MS/MS) analyses provided evidence that both blue mussels collected after a cyanobacterial bloom in the Baltic Sea and the crustaceans exposed under laboratory conditions to N. spumigena extract accumulated the cyclic anabaenopeptins (APs). In the crustaceans, the linear peptides, spumigins (SPUs) and aeruginosins (AERs), were additionally detected. Exposure of T. platyurus and A. franciscana to N. spumigena extract confirmed the negative effect of nodularin on the organisms. However, high numbers of dead crustaceans were also recorded in the nodularin-free fraction, which contained protease inhibitors classified to spumigins and aeruginosins. These findings indicate that cyanobacterial toxicity to aquatic organisms is a complex phenomenon and the induced effects can be attributed to diverse metabolites, not only to the known hepatotoxins. View Full-Text
Keywords: bioaccumulation; blue mussels; Baltic cyanobacteria; cyanopeptides; crustaceans; Nodularia spumigena bioaccumulation; blue mussels; Baltic cyanobacteria; cyanopeptides; crustaceans; Nodularia spumigena
►▼ Show Figures 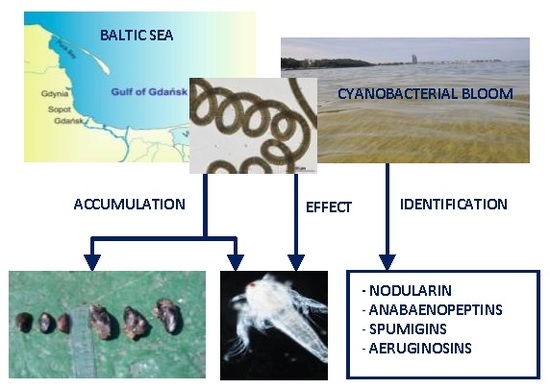