The Saccharomyces boulardii CNCM I-745 Strain Shows Protective Effects against the B. anthracis LT Toxin
Previous Article in Special Issue

Venoms of invertebrates contain an enormous diversity of proteins, peptides, and other classes of substances. Insect venoms are characterized by a large interspecific variation resulting in extended lists of venom compounds. The venom composition of several hymenopterans also shows different intraspecific variation. For instance, venom from different honeybee castes, more specifically queens and workers, shows quantitative and qualitative variation, while the environment, like seasonal changes, also proves to be an important factor. The present study aimed at an in-depth analysis of the intraspecific variation in the honeybee venom proteome. In summer workers, the recent list of venom proteins resulted from merging combinatorial peptide ligand library sample pretreatment and targeted tandem mass spectrometry realized with a Fourier transform ion cyclotron resonance mass spectrometer (FT-ICR MS/MS). Now, the same technique was used to determine the venom proteome of queens and winter bees, enabling us to compare it with that of summer bees. In total, 34 putative venom toxins were found, of which two were never described in honeybee venoms before. Venom from winter workers did not contain toxins that were not present in queens or summer workers, while winter worker venom lacked the allergen Api m 12, also known as vitellogenin. Venom from queen bees, on the other hand, was lacking six of the 34 venom toxins compared to worker bees, while it contained two new venom toxins, in particularly serine proteinase stubble and antithrombin-III. Although people are hardly stung by honeybees during winter or by queen bees, these newly identified toxins should be taken into account in the characterization of a putative allergic response against Apis mellifera stings. View Full-Text
Keywords: honeybee; venom; mass spectrometry; queen; seasonal variation; caste differentiation; vitellogenin honeybee; venom; mass spectrometry; queen; seasonal variation; caste differentiation; vitellogenin
►▼ Show Figures 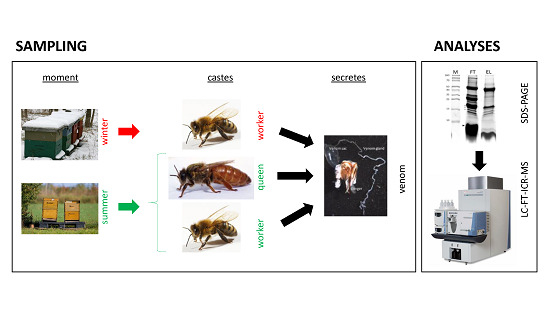