A multi-method approach was employed to compare the responses of Glutatione Transferases (GSTs) in the gills and hepatopancreas of Venerupis philippinarum to microcystins (MCs) toxicity. In this way, using the cytosolic fraction, the enzymatic activity of GSTs, superoxide dismutase (SOD), serine/threonine protein phosphatases (PPP2) along with the gene expression levels of four GST isoforms (pi, mu, sigma1, sigma2) were investigated in both organs of the clams exposed for 24 h to 10, 50 and 100 μg L−1 of MC-LR. Cytosolic GSTs (cGSTs) from both organs of the high dose exposed clams were purified by glutathione-agarose affinity chromatography, characterized kinetically and the changes in the expression of cGSTs of the gills identified using a proteomic approach. MC-LR caused an increase in GST enzyme activity, involved in conjugation reactions, in both gills and hepatopancreas (100 μg L−1 exposure). SOD activity, an indicator of oxidative stress, showed signiﬁcantly elevated levels in the hepatopancreas only (50 and 100 μg L−1 exposure). No significant changes were found in PPP2 activity, the main target of MCs, for both organs. Transcription responses revealed an up-regulation of sigma2 in the hepatopancreas at the high dose, but no significant changes were detected in the gills. Kinetic analysis evidenced differences between gills of exposed and non-exposed extracts. Using proteomics, qualitative and quantitative differences were found between the basal and inducible cGSTs. Overall, results suggest a distinct role of GST system in counteracting MCs toxicity between the gills and the hepatopancreas of V. philippinarum, revealing different roles between GST isoforms within and among both organs. View Full-Text
Keywords: microcystins; glutathione transferases; enzyme activity; proteomics; real-time PCR; V. philippinarum; detoxification; biomarker microcystins; glutathione transferases; enzyme activity; proteomics; real-time PCR; V. philippinarum; detoxification; biomarker
►▼ Show Figures 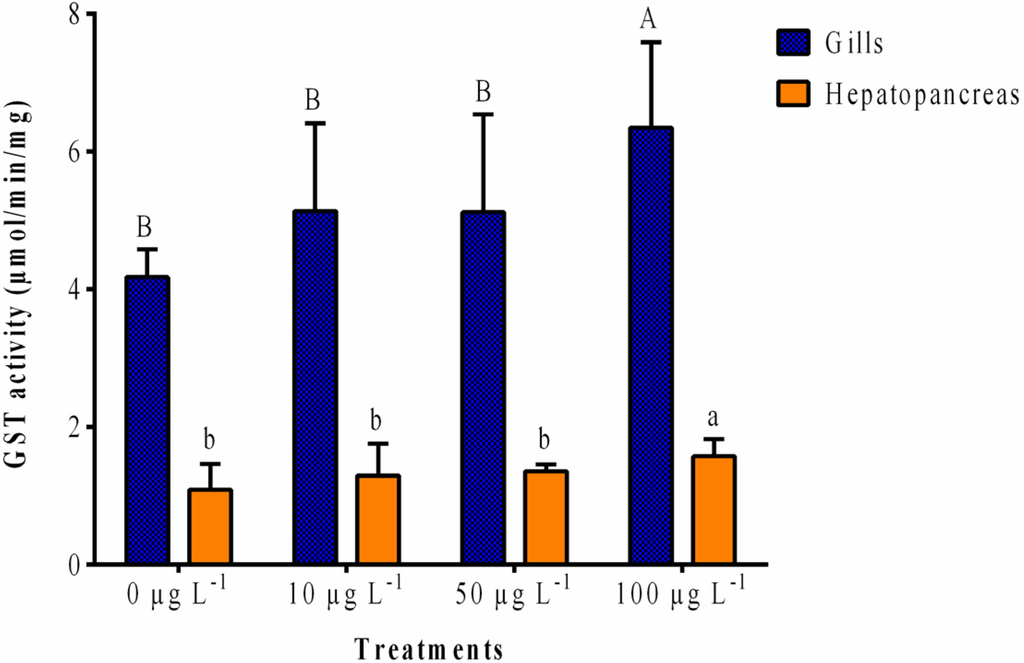