Aflatoxins are a group of naturally-occurring carcinogens that are known to contaminate different human and animal foodstuffs. Aflatoxin B1 (AFB1) is the most genotoxic hepatocarcinogenic compound of all of the aflatoxins. In this report, we explore the capacity of β-D-glucan (Glu) to reduce the DNA damage induced by AFB1 in mouse hepatocytes. For this purpose, we applied the comet assay to groups of animals that were first administered Glu in three doses (100, 400 and 700 mg/kg bw, respectively) and, 20 min later, 1.0 mg/kg of AFB1. Liver cells were obtained at 4, 10 and 16 h after the chemical administration and examined. The results showed no protection of the damage induced by AFB1 with the low dose of the polysaccharide, but they did reveal antigenotoxic activity exerted by the two high doses. In addition, we induced a co-crystallization between both compounds, determined their fusion points and analyzed the molecules by UV spectroscopy. The data suggested the formation of a supramolecular complex between AFB1 and β-D-glucan. View Full-Text
Keywords: aflatoxin B1; glucan; mouse hepatocytes; antigenotoxicity aflatoxin B1; glucan; mouse hepatocytes; antigenotoxicity
►▼ Show Figures 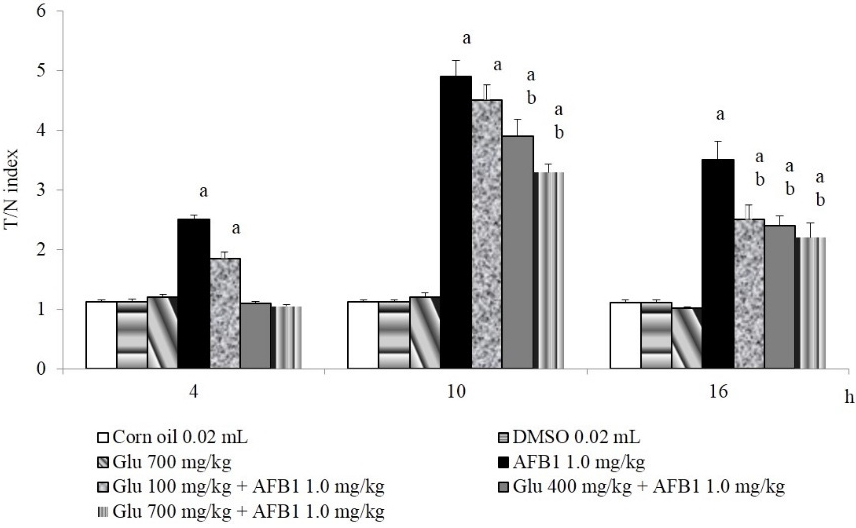