Spotlight on the Underdogs—An Analysis of Underrepresented Alternaria Mycotoxins Formed Depending on Varying Substrate, Time and Temperature Conditions
Previous Article in Journal

Natural Occurrence of Alternaria Toxins in the 2015 Wheat from Anhui Province, China

Development and Validation of a LC-ESI-MS/MS Method for the Determination of Alternaria Toxins Alternariol, Alternariol Methyl-Ether and Tentoxin in Tomato and Tomato-Based Products

Alternaria species are capable of producing several secondary toxic metabolites in infected plants and in agricultural commodities, which play important roles in food safety. Alternaria alternata turn out to be the most frequent fungal species invading tomatoes. Alternariol (AOH), alternariol monomethyl ether (AME), and tentoxin (TEN) are some of the main Alternaria mycotoxins that can be found as contaminants in food. In this work, an analytical method based on liquid chromatography (LC) tandem mass spectrometry (MS/MS) detection for the simultaneous quantification of AOH, AME, and TEN in tomato and tomato-based products was developed. Mycotoxin analysis was performed by dispersive liquid-liquid microextraction (DLLME) combined with LC-ESI-MS/MS. Careful optimization of the MS/MS parameters was performed with an LC/MS system with the ESI interface in the positive ion mode. Mycotoxins were efficiently extracted from sample extract into a droplet of chloroform (100 µL) by DLLME technique using acetonitrile as a disperser solvent. Method validation following the Commission Decision No. 2002/657/EC was carried out by using tomato juice as a blank matrix. Limits of detection and quantitation were, respectively, in the range 0.7 and 3.5 ng/g. Recovery rates were above 80%. Relative standard deviations of repeatability (RSDr) and intermediate reproducibility (RSDR) were ≤ 9% and ≤ 15%, respectively, at levels of 25 and 50 ng/g. Five out of 30 analyzed samples resulted positive to at least one Alternaria toxin investigated. AOH was the most common Alternaria toxin found, but at levels close to LOQ (average content: 3.75 ng/g). View Full-Text
Keywords: Alternaria; LC-MS/MS; dispersive liquid-liquid microextraction; tomato Alternaria; LC-MS/MS; dispersive liquid-liquid microextraction; tomato
►▼ Show Figures 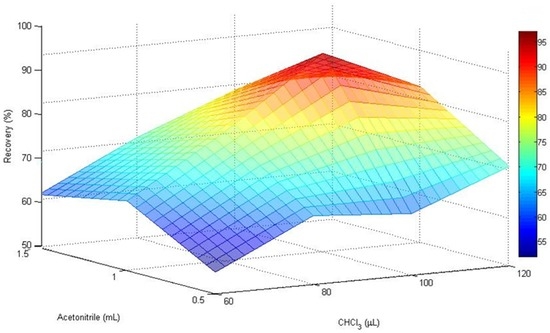 
Rodríguez-Carrasco, Yelko, Jordi Mañes, Houda Berrada, and Cristina Juan. 2016. "Development and Validation of a LC-ESI-MS/MS Method for the Determination of Alternaria Toxins Alternariol, Alternariol Methyl-Ether and Tentoxin in Tomato and Tomato-Based Products" Toxins 8, no. 11: 328. https://0-doi-org.brum.beds.ac.uk/10.3390/toxins8110328