Mycotoxin Contamination in Sugarcane Grass and Juice: First Report on Detection of Multiple Mycotoxins and Exposure Assessment for Aflatoxins B1 and G1 in Humans
Previous Article in Journal

In Nigeria, maize, sorghum, and millet are very important cash crops. They are consumed on a daily basis in different processed forms in diverse cultural backgrounds. These crops are prone to fungi infestation, and subsequently may be contaminated with mycotoxins. A total of 363 samples comprising of maize (136), sorghum (110), millet (87), and ogi (30) were collected from randomly selected markets in four agro-ecological zones in Nigeria. Samples were assessed for Fusarium mycotoxins contamination using a multi-mycotoxin liquid chromatography-tandem mass spectrometry (LC-MS/MS) method. Subsequently, some selected samples were analysed for the occurrence of hidden fumonisins. Overall, 64% of the samples were contaminated with at least one toxin, at the rate of 77%, 44%, 59%, and 97% for maize, sorghum, millet, and ogi, respectively. Fumonisins were the most dominant, especially in maize and ogi, occurring at the rate of 65% and 93% with mean values of 935 and 1128 μg/kg, respectively. The prevalence of diacetoxyscirpenol was observed in maize (13%), sorghum (18%), and millet (29%), irrespective of the agro-ecological zone. Other mycotoxins detected were deoxynivalenol, zearalenone, and their metabolites, nivalenol, fusarenon-X, HT-2 toxin, and hidden fumonisins. About 43% of the samples were contaminated with more than one toxin. This study suggests that consumption of cereals and cereal-based products, ogi particularly by infants may be a source of exposure to Fusarium mycotoxins. View Full-Text
Keywords: Fusarium mycotoxins; occurrence; cereal; ogi; LC-MS/MS; Nigeria Fusarium mycotoxins; occurrence; cereal; ogi; LC-MS/MS; Nigeria
►▼ Show Figures 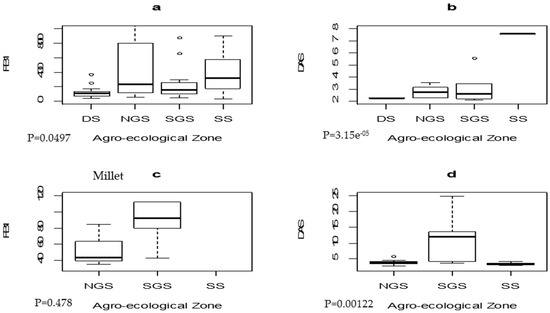