Dehydropyrrolizidine alkaloid (DHPA)-producing plants have a worldwide distribution amongst flowering plants and commonly cause poisoning of livestock, wildlife, and humans. Previous work has produced considerable understanding of DHPA metabolism, toxicity, species susceptibility, conditions, and routes of exposure, and pathogenesis of acute poisoning. Intoxication is generally caused by contaminated grains, feed, flour, and breads that result in acute, high-dose, short-duration poisoning. Acute poisoning produces hepatic necrosis that is usually confirmed histologically, epidemiologically, and chemically. Less is known about chronic poisoning that may result when plant populations are sporadic, used as tisanes or herbal preparations, or when DHPAs contaminate milk, honey, pollen, or other animal-derived products. Such subclinical exposures may contribute to the development of chronic disease in humans or may be cumulative and probably slowly progress until liver failure. Recent work using rodent models suggest increased neoplastic incidence even with very low DHPA doses of short durations. These concerns have moved some governments to prohibit or limit human exposure to DHPAs. The purpose of this review is to summarize some recent DHPA research, including in vitro and in vivo DHPA toxicity and carcinogenicity reports, and the implications of these findings with respect to diagnosis and prognosis for human and animal health. View Full-Text
Keywords: dehydropyrrolizidine; DHPA; pyrrolizidine; alkaloids; PA; toxic plant; pyrrolizidine alkaloid-induced cytotoxicity; toxic hepatopathy; carcinogenesis dehydropyrrolizidine; DHPA; pyrrolizidine; alkaloids; PA; toxic plant; pyrrolizidine alkaloid-induced cytotoxicity; toxic hepatopathy; carcinogenesis
►▼ Show Figures 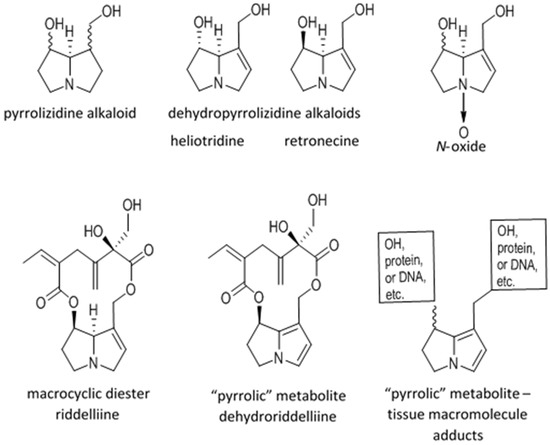