A Single Dose of ViperfavTM May Be Inadequate for Vipera ammodytes Snake Bite: A Case Report and Pharmacokinetic Evaluation
Previous Article in Special Issue

Report from the 5th International Symposium on Mycotoxins and Toxigenic Moulds: Challenges and Perspectives (MYTOX) Held in Ghent, Belgium, May 2016

Ochratoxin A (OTA) is a mycotoxin, mainly produced on grapes by Aspergillus carbonarius, that causes massive health problems for humans. This study aims to reduce the occurrence of OTA by using the ten following essential oils (E.Os): fennel, cardamom, anise, chamomile, celery, cinnamon, thyme, taramira, oregano and rosemary at 1 µL/mL and 5 µL/mL for each E.O.As a matter of fact, their effects on the OTA production and the growth of A. carbonarius S402 cultures were evaluated, after four days at 28 °C on a Synthetic Grape Medium (SGM). Results showed that A. carbonarius growth was reduced up to 100%, when cultured with the E.Os of cinnamon, taramira, and oregano at both concentrations and the thyme at 5 µL/mL. As for the other six E.Os, their effect on A. carbonarius growth was insignificant, but highly important on the OTA production. Interestingly, the fennel E.O at 5 µL/mL reduced the OTA production up to 88.9% compared to the control, with only 13.8% of fungal growth reduction. We further investigated the effect of these E.Os on the expression levels of the genes responsible for the OTA biosynthesis (acOTApks and acOTAnrps along with the acpks gene) as well as the two regulatory genes laeA and vea, using the quantitative Reverse Transcription-Polymerase Chain Reaction (qRT-PCR) method. The results revealed that these six E.Os reduced the expression of the five studied genes, where the ackps was downregulated by 99.2% (the highest downregulation in this study) with 5 µL/mL of fennel E.O.As for the acOTApks, acOTAnrps, veA and laeA, their reduction levels ranged between 10% and 96% depending on the nature of the E.O and its concentration in the medium. View Full-Text
Keywords: Aspergillus carbonarius; Ochratoxin A; gene expression; essential oils Aspergillus carbonarius; Ochratoxin A; gene expression; essential oils
►▼ Show Figures 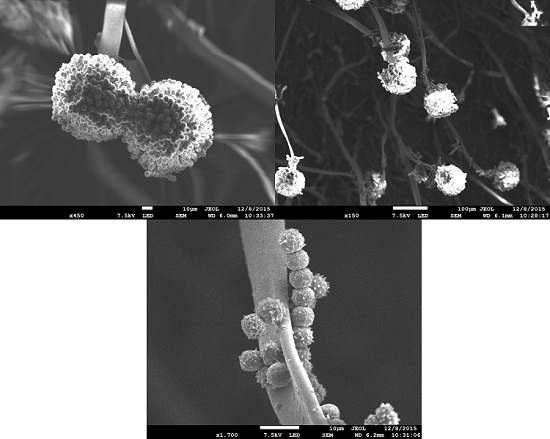