The Influence of Resiniferatoxin (RTX) and Tetrodotoxin (TTX) on the Distribution, Relative Frequency, and Chemical Coding of Noradrenergic and Cholinergic Nerve Fibers Supplying the Porcine Urinary Bladder Wall

A previous study highlighted that mastoparan V1 (MP-V1), a mastoparan from the venom of the social wasp Vespula vulgaris, is a potent antimicrobial peptide against Salmonella infection, which causes enteric diseases. However, there exist some limits for its practical application due to the loss of its activity in an increased bacterial density and the difficulty of its efficient production. In this study, we first modulated successfully the antimicrobial activity of synthetic MP-V1 against an increased Salmonella population using protease inhibitors, and developed an Escherichia coli secretion system efficiently producing active MP-V1. The protease inhibitors used, except pepstatin A, significantly increased the antimicrobial activity of the synthetic MP-V1 at minimum inhibitory concentrations (determined against 106 cfu/mL of population) against an increased population (108 cfu/mL) of three different Salmonella serotypes, Gallinarum, Typhimurium and Enteritidis. Meanwhile, the E. coli strain harboring OmpA SS::MP-V1 was identified to successfully secrete active MP-V1 into cell-free supernatant, whose antimicrobial activity disappeared in the increased population (108 cfu/mL) of Salmonella Typhimurium recovered by adding a protease inhibitor cocktail. Therefore, it has been concluded that our challenge using the E. coli secretion system with the protease inhibitors is an attractive strategy for practical application of peptide toxins, such as MP-V1. View Full-Text
Keywords: AMP; bacterial secretion system; inoculum effect; mastoparan; MP-V1; protease inhibitor; Salmonella; wasp venom toxin AMP; bacterial secretion system; inoculum effect; mastoparan; MP-V1; protease inhibitor; Salmonella; wasp venom toxin
►▼ Show Figures 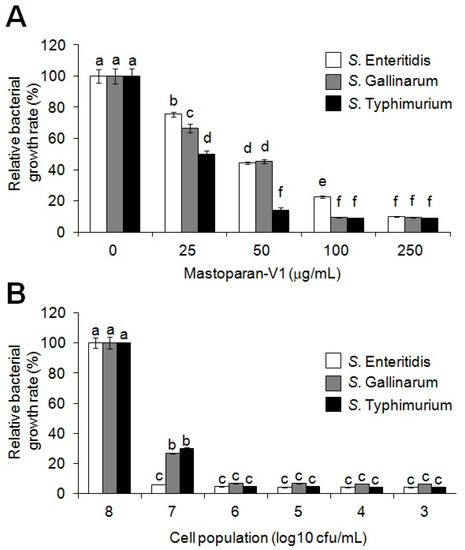