Microbial Detoxification of Deoxynivalenol (DON), Assessed via a Lemna minor L. Bioassay, through Biotransformation to 3-epi-DON and 3-epi-DOM-1
Previous Article in Special Issue

Future sustainability of freshwater resources is seriously threatened due to the presence of harmful cyanobacterial blooms, and yet, the number, extent, and distribution of most cyanobacterial toxins—including “emerging” toxins and other bioactive compounds—are poorly understood. We measured 15 cyanobacterial compounds—including four microcystins (MC), saxitoxin (SXT), cylindrospermopsin (CYL), anatoxin-a (ATX) and homo-anatoxin-a (hATX), two anabaenopeptins (Apt), three cyanopeptolins (Cpt), microginin (Mgn), and nodularin (NOD)—in six freshwater lakes that regularly experience noxious cHABs. MC, a human liver toxin, was present in all six lakes and was detected in 80% of all samples. Similarly, Apt, Cpt, and Mgn were detected in all lakes in roughly 86%, 50%, and 35% of all samples, respectively. Despite being a notable brackish water toxin, NOD was detected in the two shallowest lakes—Wingra (4.3 m) and Koshkonong (2.1 m). All compounds were highly variable temporally, and spatially. Metabolite profiles were significantly different between lakes suggesting lake characteristics influenced the cyanobacterial community and/or metabolite production. Understanding how cyanobacterial toxins are distributed across eutrophic lakes may shed light onto the ecological function of these metabolites, provide valuable information for their remediation and removal, and aid in the protection of public health. View Full-Text
Keywords: microcystin;  anabaenopeptin;  cyanopeptolin;  nodularin;  microginin;  anatoxin;  cylindrospermopsin; saxitoxin microcystin;  anabaenopeptin;  cyanopeptolin;  nodularin;  microginin;  anatoxin;  cylindrospermopsin; saxitoxin
►▼ Show Figures 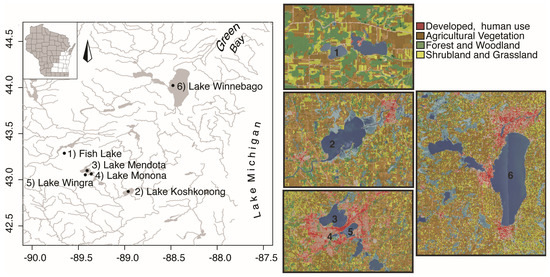