The KIAA0100 gene was identified in the human immature myeloid cell line cDNA library. Recent studies have shown that its expression is elevated in breast cancer and associated with more aggressive cancer types as well as poor outcomes. However, its cellular and molecular function is yet to be understood. Here we show that silencing KIAA0100 by siRNA in the breast cancer cell line MDA-MB-231 significantly reduced the cancer cells’ aggressive behavior, including cell aggregation, reattachment, cell metastasis and invasion. Most importantly, silencing the expression of KIAA0100 particularly sensitized the quiescent cancer cells in suspension culture to anoikis. Immunoprecipitation, mass spectrometry and immunofluorescence analysis revealed that KIAA0100 may play multiple roles in the cancer cells, including stabilizing microtubule structure as a microtubule binding protein, and contributing to MDA-MB-231 cells Anoikis resistance by the interaction with stress protein HSPA1A. Our study also implies that the interaction between KIAA0100 and HSPA1A may be targeted for new drug development to specifically induce anoikis cell death in the cancer cell. View Full-Text
Keywords: KIAA0100; breast cancer; anoikis; microtubule binding protein; heat shock protein; aggression KIAA0100; breast cancer; anoikis; microtubule binding protein; heat shock protein; aggression
►▼ Show Figures 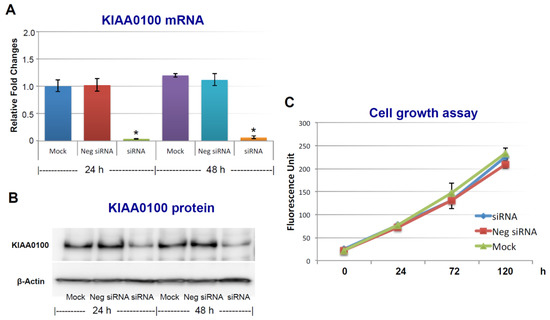