Together with population ageing, the number of people suffering from multimorbidity is increasing, up to more than half of the population by 2035. This part of the population is composed by the highest-risk patients, who are, at the same time, the major users of the healthcare systems. The early identification of this sub-population can really help to improve people’s quality of life and reduce healthcare costs. In this paper, we describe a population health management tool based on state-of-the-art intelligent algorithms, starting from administrative and socio-economic data, for the early identification of high-risk patients. The study refers to the population of the Local Health Unit of Central Tuscany in 2015, which amounts to 1,670,129 residents. After a trade-off on machine learning models and on input data, Random Forest applied to 1-year of historical data achieves the best results, outperforming state-of-the-art models. The most important variables for this model, in terms of mean minimal depth, accuracy decrease and Gini decrease, result to be age and some group of drugs, such as high-ceiling diuretics. Thanks to the low inference time and reduced memory usage, the resulting model allows for real-time risk prediction updates whenever new data become available, giving General Practitioners the possibility to early adopt personalised medicine. View Full-Text
Keywords: decision support system; population health management; explainable artificial intelligence; machine learning; big data decision support system; population health management; explainable artificial intelligence; machine learning; big data
►▼ Show Figures 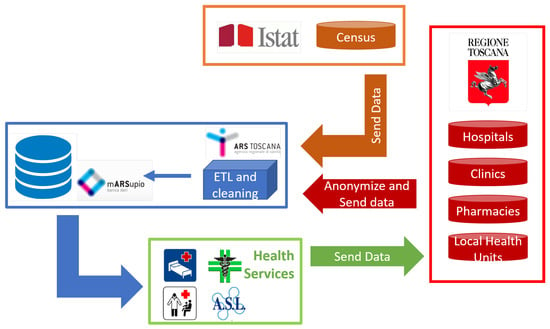