The Role of Cultural Capital on the Voluntary Contributions to Cultural Goods: A Differential Game Approach

Before starting with the formal analysis, it is useful to summarily conceptualise our model’s underlying hypotheses for a better understanding of the mechanisms involved in the accumulation process of cultural capital:
Now, we can move to the formal analysis of our model. Let us suppose that there is a society made of n (n ≥ 2) individuals (equilibria in games with a continuum of players resemble the limit of the corresponding equilibria in games with finitely many players [23]) identical in terms of preferences and income levels (for the sake of simplicity, we do not allow for heterogeneity of individuals’ behaviour [24,25]). We imagine that each subject, who has an initial endowment, which is the same for every individual, at the beginning of each period has to decide how to allocate his resources among his consumption of private good, , and his voluntary contribution to the offer of cultural good, . The utility function is, then, the same for every subject,
In this way, individual preferences are driven by attention to cultural good , by the consumed amount of private good ), and by the total amount of the produced cultural good .
The budget constraint which each subject must satisfy is given by:
Such constraint indicates how the whole initial endowment , considered net of the taxes paid by every individual, must be allocated among consumption of the private good ) and contribution to cultural good . However, it does not contain the term , because it refers to a non-monetary factor, affecting individual preferences on cultural good allocations though.
Since we assume that individuals are identical, we can consider both the utility function and the budget constraint to be the same for all the subjects. Moreover, the utility function is the sum of three monotone and concave sub-utility functions, which makes it monotone and concave as well.
The utility function which measures the attention level to cultural capital is:
Therefore, attention towards cultural capital is positively correlated with cultural capital, , with the individual contribution level, , and with the parameter measuring individual’s sensitivity towards cultural capital. It must be noticed that it is possible not to contribute to the provision of cultural goods and, thus, not to fully enjoy social approval, but at the same time to have the pleasant feeling coming from the presence of a higher level of cultural capital in the society.
The total quantity of cultural capital is obtained through the following linear production function: where, clearly, is the total amount of voluntary contribution to cultural good, and is the tax revenue which represents the compulsory contribution level established by the government. Therefore, the utility function, which refers to the amount of the offered cultural good, is given by:
By replacing the production function for the cultural capital (4) into (5), we obtain:
Finally, we assume the third utility function as: where α, refers to individual propensity to voluntarily contribute to the cultural good. In order to investigate the evolution of voluntary contributions to changes in the economy cultural capital level, we use a differential game approach. To ensure the solvability of the problems defining the efficient and the equilibrium steady-state contributions and, in turn, to compare these levels, we assume that the sub-utilities are quadratic. In this way, the dynamic interaction can be described as a linear quadratic differential game [26]. Such a technique allows us to obtain and compare different equilibrium levels of the state variable in the case of Nash equilibrium with open-loop, feedback, or closed-loop strategies as well as Pareto efficient strategies, to changes in the individuals’ interactions over time.
Indeed, open-loop strategies require that individuals own information only on the economy’s initial state. Therefore, they are obliged to choose their strategies concerning the whole game in the starting period, without being allowed to change them later. Alternatively, feedback or closed-loop strategies depend on the time and the piece of information of the economy’s current state. Consequently, individuals can change their strategy in every period, taking decisions after observing the system’s current state. Notably, we refer to the voluntary offer of public goods models in dynamic context developed by van der Ploeg and de Zeeuw [27] and Fershtman and Nitzan [26].

Before obtaining Nash equilibrium with open-loop strategies, we first need to define the necessary conditions to the optimal control, using the Pontryagin’s maximum principle. Given that, in this case, strategies only depend on time, we can write the individual’s intertemporal maximization problem, making the sub-utility functions explicit: where the dynamic equation for cultural capital (8) indicates how cultural capital level changes over time in the system as a function of contributions choices and the level of taxes decided by government which are exogenous. The evolution of capital value is also negatively correlated with the depreciation level () of cultural capital of the previous period (i.e., constant in time). Finally, represents the system’s initial state of cultural capital.
In order to find the level of cultural capital corresponding to the Nash equilibrium with open-loop strategies, we must write the Hamiltonian equation referred to the current value, , and necessary and sufficient conditions for a maximum, where is the co-state variable and is the intertemporal discount rate.
The Hamiltonian equation, then, will be:
Maximizing (13) with respect to we obtain:
Since in the steady state , by replacing them, we get:
In this way, we obtain the optimal level . By replacing in the first and second order conditions, solving for , we obtain the corresponding equilibrium levels with open-loop strategies:
Now, we can calculate the Pareto efficient level of cultural capital, applying the same technique. The only difference lies in the fact that we consider the total sensitivity level towards cultural goods instead of individual levels. The Hamiltonian function will be:
First and second order conditions for Equation (18) become, respectively:
Replacing in the first and second order conditions and solving for , we obtain:
Putting in steady state cultural capital equation, we can determine its optimal level, .
By comparing the equilibrium values obtained for Nash equilibrium with open-loop strategies (16) and that Pareto efficient (23), we can say that . Noncooperative behaviour, which allows a society to achieve the economy’s optimal individual level of cultural capital, does not allow to obtain the levels predicted for the Pareto efficient solution. Such a condition, in fact, requires that individuals have cooperative behaviours. However, it must be noticed that the existence of a maximum threshold for the parameter which represents the attention level towards cultural goods, at which the previously described inequality will not be satisfied, shows how it is possible to reach excessive levels of cultural capital so that a noncooperative solution becomes more efficient.

Let us replace the steady state individual contribution level to the cultural good, , and the value function in the Hamiltonian-Jacobi-Bellman equation:
After some tedious algebra, we get:
Collecting the terms with and and setting them equal to 0, we obtain two Riccati differential equations in and .
Considering the first group of terms:
The last quadratic equation has two solutions, namely
Given that we have assumed , we choose solution .
Considering the second group of terms and after some algebra, we get:
Taking together the parameter values for and , the closed-loop equilibrium strategies and the accumulation function for cultural capital in the steady state, we determine the cultural capital level corresponding to the subgame perfect Nash equilibrium
After the usual tedious algebra, we get: 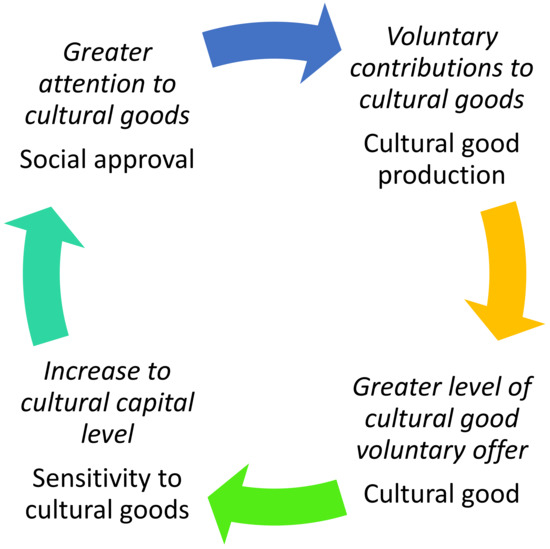 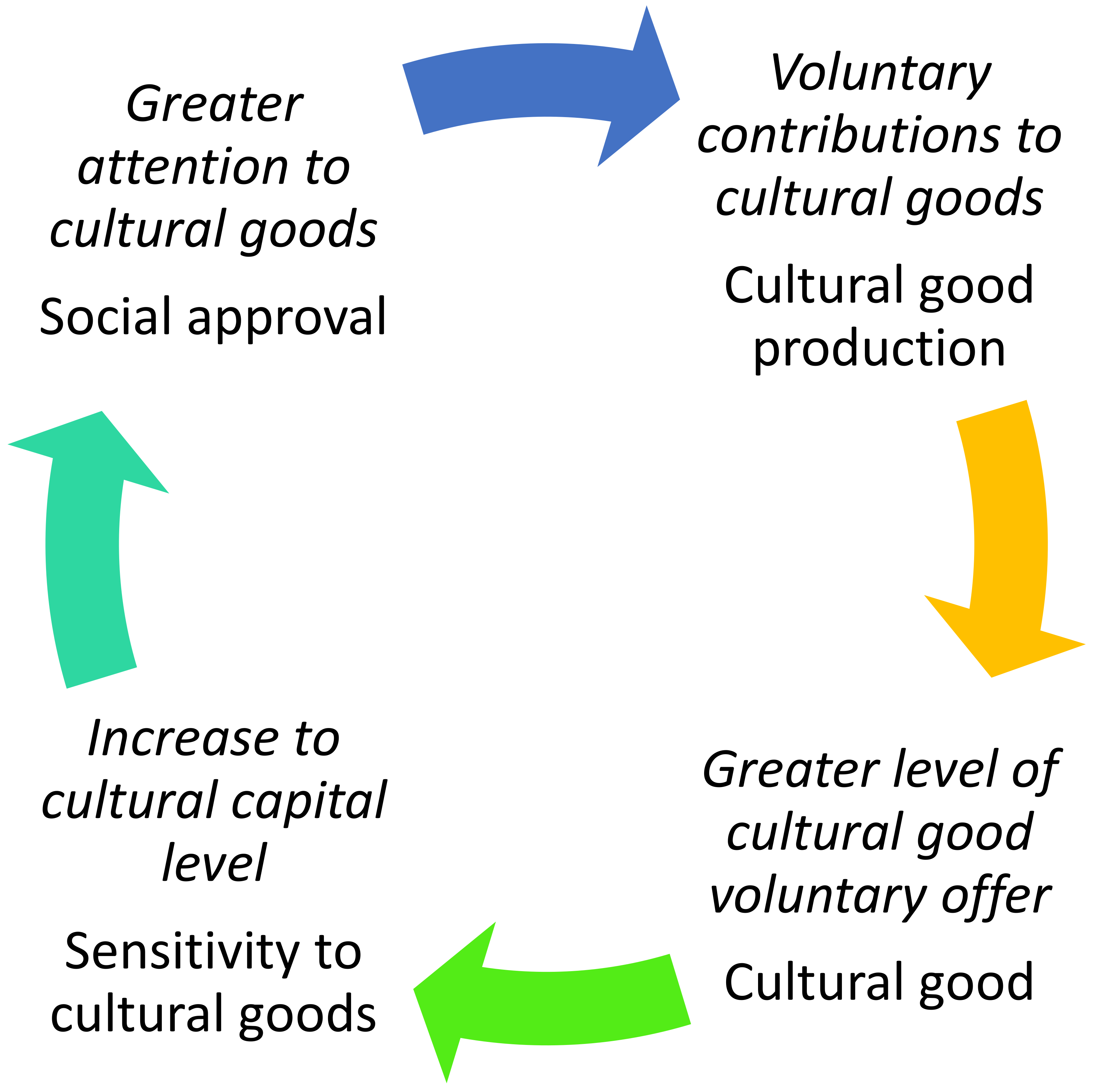