Preparation, Physicochemical Properties, and Hemocompatibility of the Composites Based on Biodegradable Poly(Ether-Ester-Urethane) and Phosphorylcholine-Containing Copolymer
Previous Article in Journal

An Ab Initio Investigation of the 4,4′-Methlylene Diphenyl Diamine (4,4′-MDA) Formation from the Reaction of Aniline with Formaldehyde

In this paper the preparation and detailed characterization of designed polyurethanes (SPURs) are reported for potential biological, biomedical and/or pharmaceutical applications. Importantly, in order to fulfill these goals all reactants and solvents used were selected according to the proposal of EUR-8 Pharmacopoeia. For the synthesis, a novel strategy was introduced and elaborated. A series of SPUR samples was prepared from poly(ε-caprolactone)-diol, 1,6-hexamethylene diisocyanate and sucrose as a chain extender/crosslinking agent to obtain sucrose containing polyurethanes. In addition, the mol ratios of the sucrose were varied within an order of magnitude. The prepolymers and the products of the syntheses were investigated by matrix-assisted laser desorption/ionization time-of-flight mass spectrometry (MALDI-TOF MS) and infrared spectroscopy (IR), respectively. It was found that the reactivity of the eight free hydroxyl groups of sucrose are different, and after curing the SPUR samples at 60 °C no free isocyanate groups can be observed. Furthermore, swelling experiments performed with various solvents of different polarities revealed that the highest degree of swelling took place in dimethyl-sulfoxide. However, low degrees of swelling were recognized in water and hexane. It is important to note that the gel contents were around 90% in all cases, which demonstrate that the crosslinking was almost complete. In addition, the kinetics of swelling were also evaluated and successfully modeled. The crosslink densities were calculated from the data of the swelling experiments by means of the Flory-Rehner equation. Unexpectedly, it was found that the crosslink density decreased with the increasing sucrose content also in line with the results obtained by relaxation modulus experiments and dynamic mechanical analysis (DMA). The Tg and Tm of SPUR samples, determined from DSC and DMA measurements, were around −57 °C and 27 °C, respectively. According to the mechanical tests the SPUR samples showed high elongation at break values, i.e., high flexibilities. Furthermore, the stress-strain curves were also modeled and discussed. View Full-Text
Keywords: poly(ε-caprolactone), 1,6-hexamethylene-diisocyanate; sucrose; polyurethane, swelling; mechanical testing poly(ε-caprolactone), 1,6-hexamethylene-diisocyanate; sucrose; polyurethane, swelling; mechanical testing
►▼ Show Figures 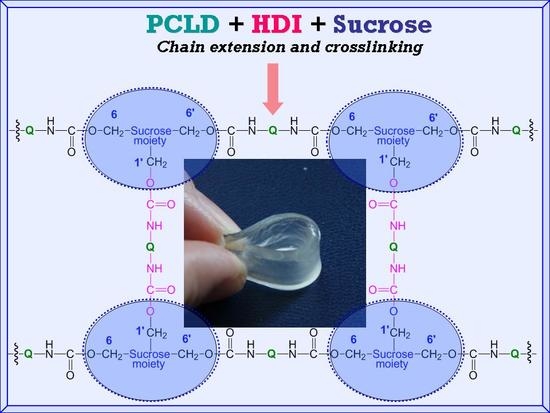