Drug delivery is a difficult task in the field of dermal therapeutics, particulalry for the treatment of burns, ulcers, and wounds [1]. Conventional drug delivery medium exists in many forms such as, topical liquid (solutions, suspensions, and emulsions), semi-solid formulations (ointments and creams), as well as dry traditional dressings including cotton wool, natural or synthetic bandages and gauzes [2]. However, topical liquid and semi-solid formulations have poor retention on the skin/wound surface where repeated application is required [3]. In addition, the conventional drug delivery media are inconvenient to administer. The dosage forms need to be rubbed into the skin for dispersing the formulations [4], causing pain, inflammation, and irritation [5]. Although dry traditional dressings are easier to use, they do not provide the moist environment that is required for wound healing [2]. On the top of that, conventional methods show uncontrolled drug release profiles, where the drug delivery is rapid and a high topical concentration might result in toxic effects [6]. To address these drawbacks, an alternative drug delivery method—hydrogels—was introduced [2,5].
Hydrogels are basically networks of three-dimensional synthetic or natural polymeric chains, cross-linked by physical or chemical bonds, which are capable of absorbing, swelling, and deswelling (releasing) extensive amount of trapped water, solvent or biological fluids without dissolving into it [7]. The ability of hydrogels to absorb large amounts of water (up to 99% of their weight) [8] and to give a spontaneous response to stimuli imposed on it such as temperature [9], pH [10,11], ionic strength [12], light [13], electric and magnetic fields [14], making them particularly useful for application in various biomedical field, especially as drug delivery media.
Thermo-responsive polymers have the ability to respond to changes in temperature, which make them useful as a dermal drug delivery medium. They exhibit a phase transition at a specific temperature, which causes a sudden change in the solubility. Polymers which become insoluble upon heating are called lower critical solution temperature (LCST) polymers. Whereas polymers which become soluble upon heating are named upper critical solution temperature (UCST) polymers [15]. Pluronic F127 (PF127), a kind of LCST polymer, presents good potential to be used as a hydrogel material as this polymer is in sol-phase below the phase transition temperature (room temperature) and changes to a gel-phase as the temperature is increased above the transition temperature (body temperature) [16]. Due to this sol-gel transition characteristic, it could be poured onto the skin to fill the wound/burn surfaces in sol-phase [17], and transform into a rigid hydrogel. In addition, PF127 was reported to be non-toxic [18] and has been approved by the Food and Drug Administration (FDA) for use as a pharmaceutical ingredient [19]. However, PF127 could not be used alone for hydrogel formation due to its inadequate mechanical strength and mechanical stability [20]. For this, another polymer (or polymers) has to be added to the hydrogel’s network for mechanical strength enhancement. Cellulose is a sustainable, biodegradable, biocompatible, and low toxicity biopolymer. Multiple research works had been developed employing PF127 thermo-responsive polymer with cellulose/cellulose derivatives for hydrogel formation. Kim et al., (2012) synthesized methylcellulose-PF127 hydrogel for anti-cancer docetaxel (DTX) drug delivery. Sustained release pattern of methylcellulose-PF127 hydrogel was significantly enhanced anti-cancer effects of DTX [21]. On the other hand, carboxymethyl cellulose sodium (CMCs)-PF127 hydrogel was developed by Wang et al., (2016) to deliver cortex moutan drug for atopic dermatitis treatment. It was found that the presence of CMCs can appreciably improve the physical properties of PF127 hydrogel, which makes it more suitable for tailored drug loading [19]. However, efforts have been taken to produce more sustainable and green hydrogels, such as using cellulose extracted from agricultural biomass [22], engineered hydrogels based on sustainable cellulose acetate [23], as well as manufacturing of cellulose/alginate monolithic hydrogel for environmental applications [24].
Palm oil industry is considered the vital manufacturing industry in Malaysia [25]. However, this industry has long been associated with negative results such as tropical deforestation, biodiversity loss, and water pollution [26]. In addition, the production of palm oil faces numerous environmental challenges due to its waste generation during the production processes [27]. Oil palm empty fruit bunches (OPEFB) is the most abundant plantation biomass waste. Malaysia produces around 7.78 million tonnes of OPEFB annually [28] and these OPEFB are burned in boilers as a power source. However, this practice had resulted air pollution and raised awareness on the resource management issues [29]. OPEFB consists of 37.3–46.5% cellulose, 25.3–33.8% hemicellulose, and 27.6–32.5% lignin [30]. High cellulose content in OPEFB makes it a good option to be selected as the sustainable polymer to support the network structure of hydrogel for its mechanical strength enhancement.
The objective of this study is to explore a green synthesis method for the development of thermo-responsive cellulose hydrogels using cellulose extracted from OPEFB. The performance of the synthesized thermo-responsive cellulose hydrogels are evaluated in terms of their swelling ratio, percentage of degradation, and in-vitro drug (silver sulfadiazine) release. The exploration of thermo-responsive cellulose hydrogel with the use of cellulose extracted from OPEFB is a good innovation research in utilizing agricultural waste as a new source of cellulose in drug delivery medium. Long-term economic, social, and environmental sustainability could be ensured with the use of cost-effective and abundantly available raw materials.

The cellulose extraction process was adapted and modified from the study conducted by Nazir et al. (2013) [31]. Firstly, OPEFB was washed with 1 w/v% detergent until the rinse water turned colorless. Next, washed OPEFB was dried at 100 ± 2 °C until a constant weight was obtained. Following, dried OPEFB was cut, and sieved using 1.18 mm opening mesh sieve. Consequently, dry OPEFB was de-waxed using 70 v/v% ethanol in soxhlet extraction apparatus for 6 h at 78 ± 2 °C. The OPEFB fibers were then washed with deionized (DI) water and dried at 100 ± 2 °C. 3 w/v% NaOH solution was added to de-waxed OPEFB fibers and heated to 121 °C for 1 h for delignification. Acid treatment was then started by soaking 10 g of delignified OPEFB fibers in 200 mL of 20 v/v% formic acid and 10 v/v% hydrogen peroxide mixture. The mixture was heated to 85 °C for 2 h. Finally, the light yellow OPEFB biocellulose fibers were bleached by suspending in 10 v/v% hydrogen peroxide with pH 9 at 60 °C for 90 min. Next, OPEFB biocellulose fibers were rinsed with DI water until neutral pH was obtained and dried in an oven at 60 ± 2 °C. Cold method was employed for the synthesis of thermo-responsive cellulose hydrogel [32]. Typically, 15–35 w/v% of PF127 was dissolved in DI water and kept in refrigerator (2–8 °C) for 20 h until complete dissolution was achieved. Next, 0.0–3.0 w/v% of extracted cellulose fibers were added into PF127 aqueous solution. The mixed solution was continuously stirred at 200 rpm for 7 days at low temperature (2–8 °C) to obtain a homogeneous thermo-responsive cellulose hydrogel. The formula of thermo-responsive cellulose hydrogel developed in this study was summarized in Table 1.

Rheological property of the synthesized thermo-responsive cellulose hydrogel was measured using Physica MCR301 Rheometer (Anton Paar, Graz, Austria). The heating rate of rheometer was set constant at 1 °C/min with temperature range between 15 °C (ambient temperature under non-physiological condition) and 37 °C (human body temperature under physioligical condition). Storage modulus (G′) and complex viscosity (η*) values were recorded as the function of temperature at fixed angular frequency of 10 1/s. G′ is a measure of energy stored and recovered per deformation cycle. High G′ value reflects elastic or highly structured thermo-responsive cellulose hydrogel [35]. On the other hand, η* is an overall resistance to deformation, and it is a function of complex shear modulus (G*) [36]. G* is sum of the elastic and viscous components of the thermo-responsive cellulose hydrogel, represented by G′ and loss modulus (G″), respectively. η* and G* are described in Equations (1) and (2), respectively. where ω is the angular frequency (rad/s): where i is the complex number (√-1).

Several kinetic models were applied to describe the kinetic governing SSD release from thermo-responsive cellulose hydrogel.
(i) Zero-Order Model
Zero-order model assumes the area of dosage form (thermo-responsive cellulose hydrogel) does not change significantly with time. This model supports slow release of drug as the dug loaded into dosage form is not disaggregate. The zero-order model is depicted by Equation (6) [44]: where Qt is the percentage of drug released at time t (%), Q0 is the initial percentage of drug in receptor medium (%), k0 corresponds to Zero-order model constant (1/h), and t is the sampling time of receptor medium (h).
(ii) First-Order Model
First-order model often use to describe the absorption and release of water soluble drug. The rate of drug release is depends on its initial concentration. First-order model is depicted by Equation (7) [45]: where k1 corresponds to First-order model constant (1/h) and r is the conversion factor (2.303).
(iii) Higuchi Model
The Higuchi model describes the release of soluble and sparingly soluble drug. Higuchi model assumes that: (i) the initial drug concentration in dosage form is higher than drug solubility, (ii) drug only spread in one dimension, (iii) drug diffusivity does not change, (iv) sink condition is achieved where the receptor medium has high capacity to dissolve the drug [41], Higuchi model is depicted by Equation (8) [46]: where kH is Higuchi model constant (1/h1/2).

Each experiment was independently repeated in triplicate, and the results were presented as mean ± standard deviation (SD). SD was calculated using the STDEV formula in Excel.

The authors wish to gratefully acknowledge the funding for this work by Dana Modal Insan (MI-2019-017) and Geran Universiti Penyelidikan (GUP-2017-098). The authors also wish to acknowledge Centre for Research and Instrumentation Management (CRIM), UKM for FESEM analysis. 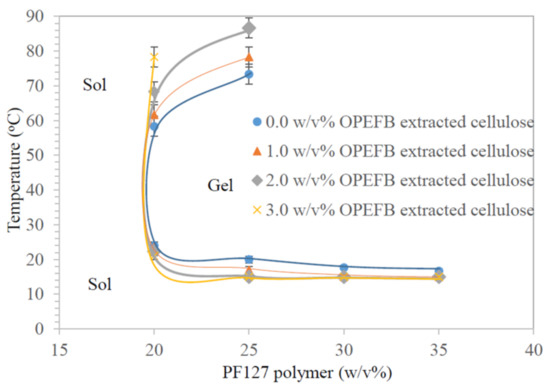 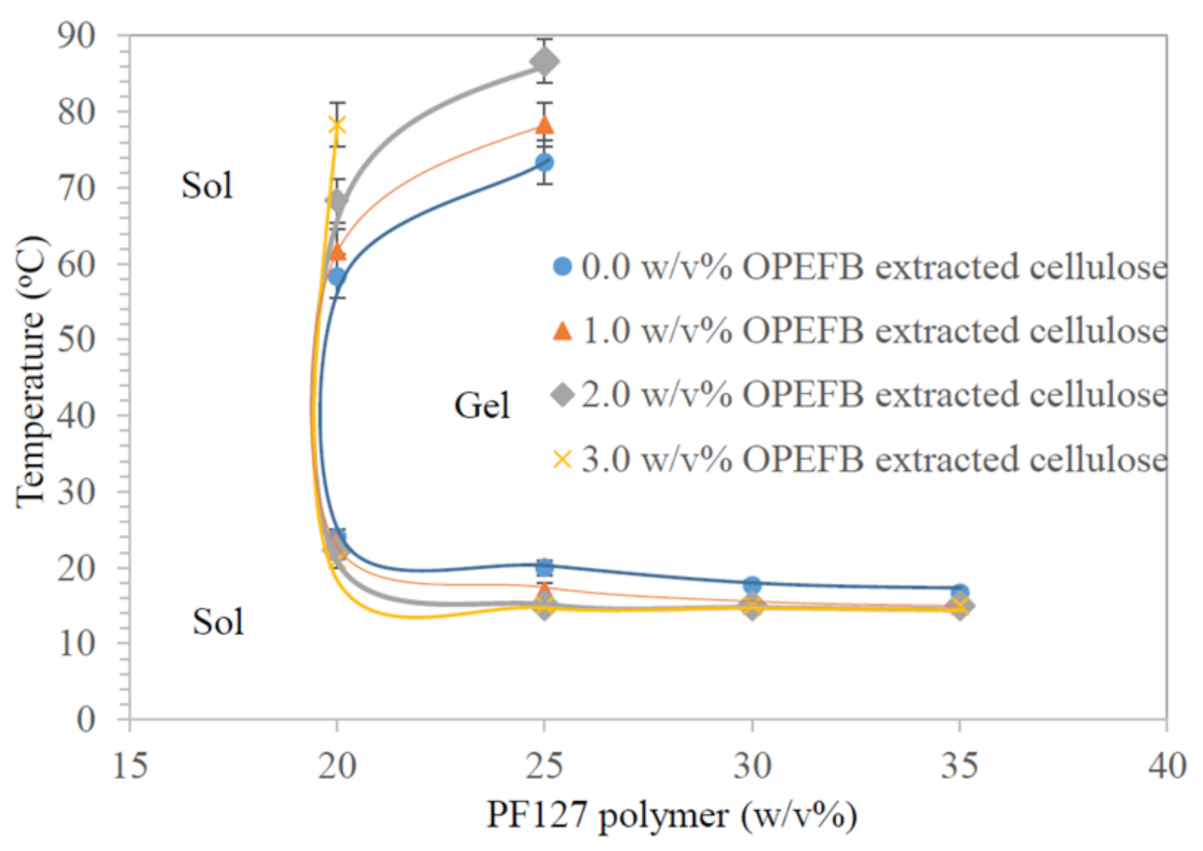 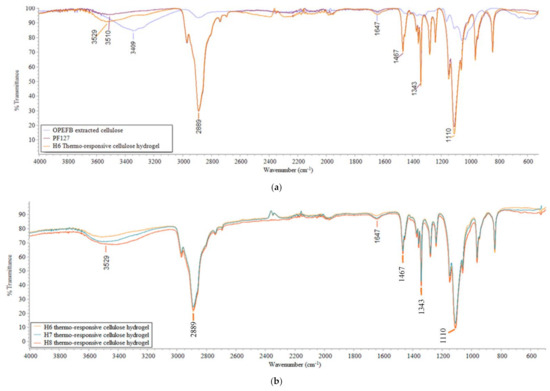 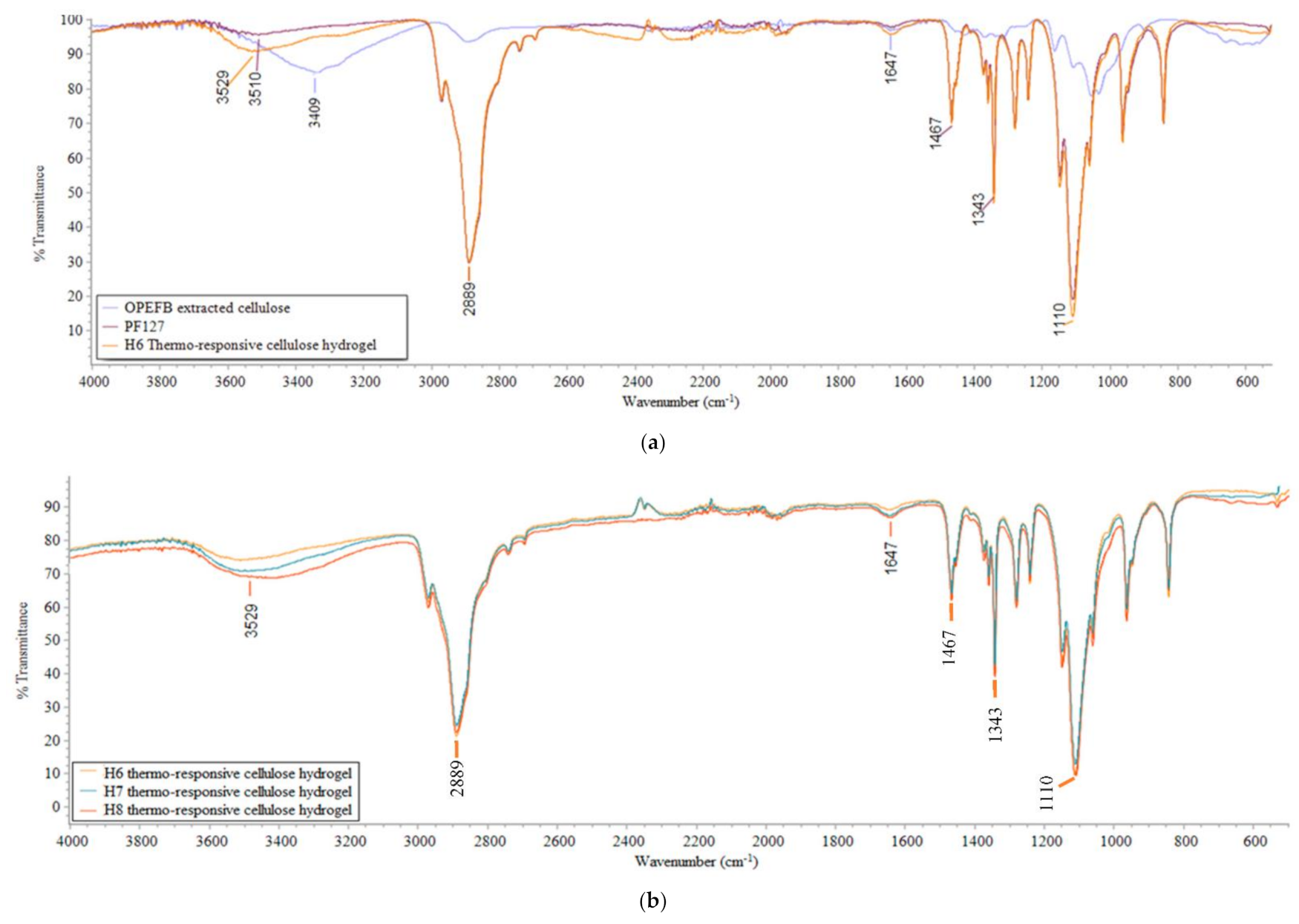 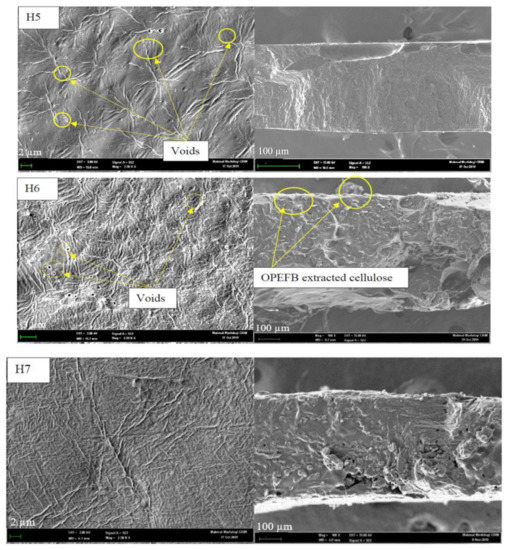 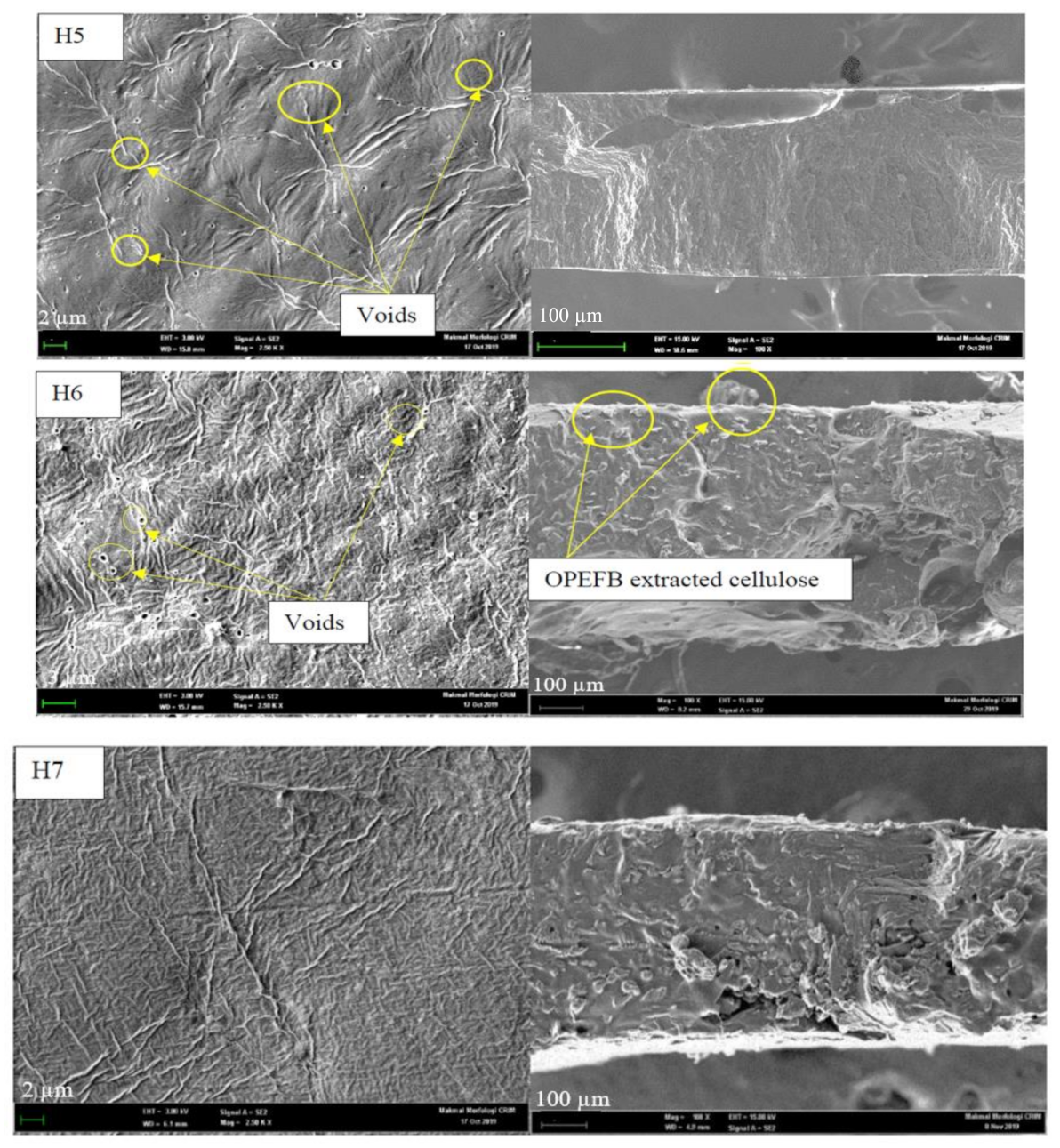 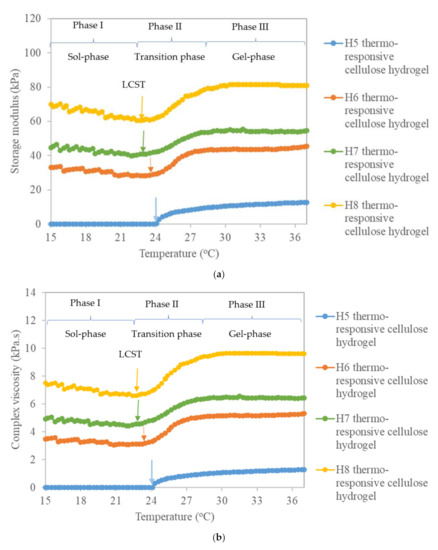 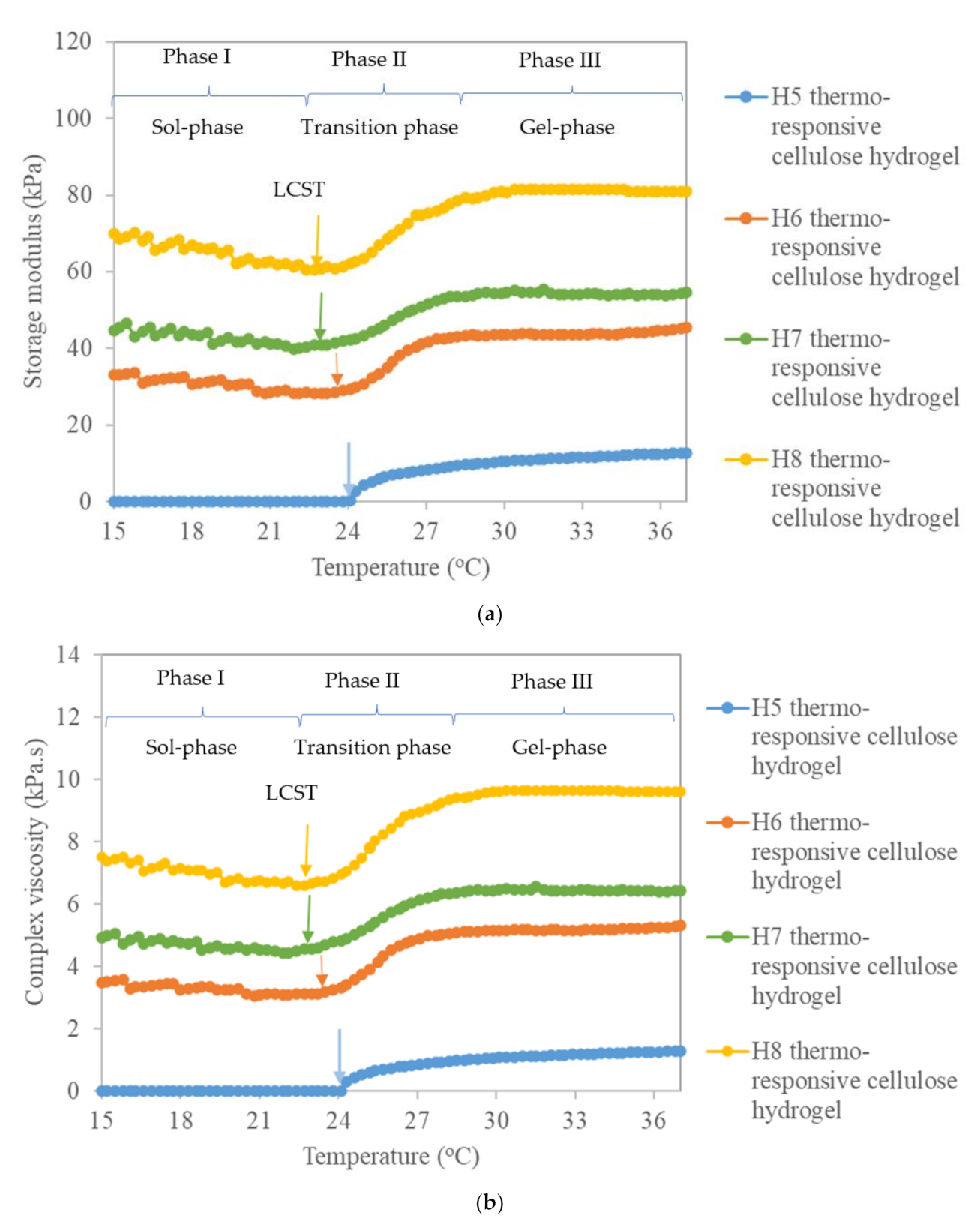 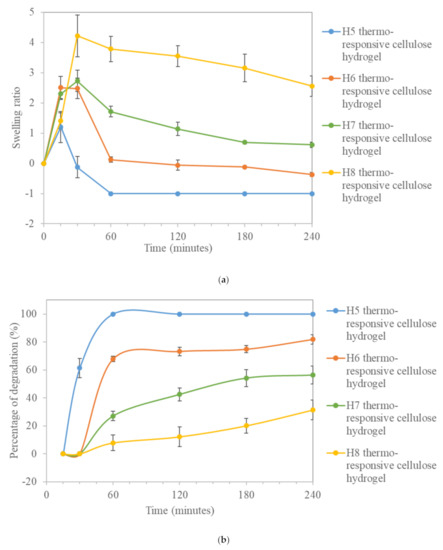 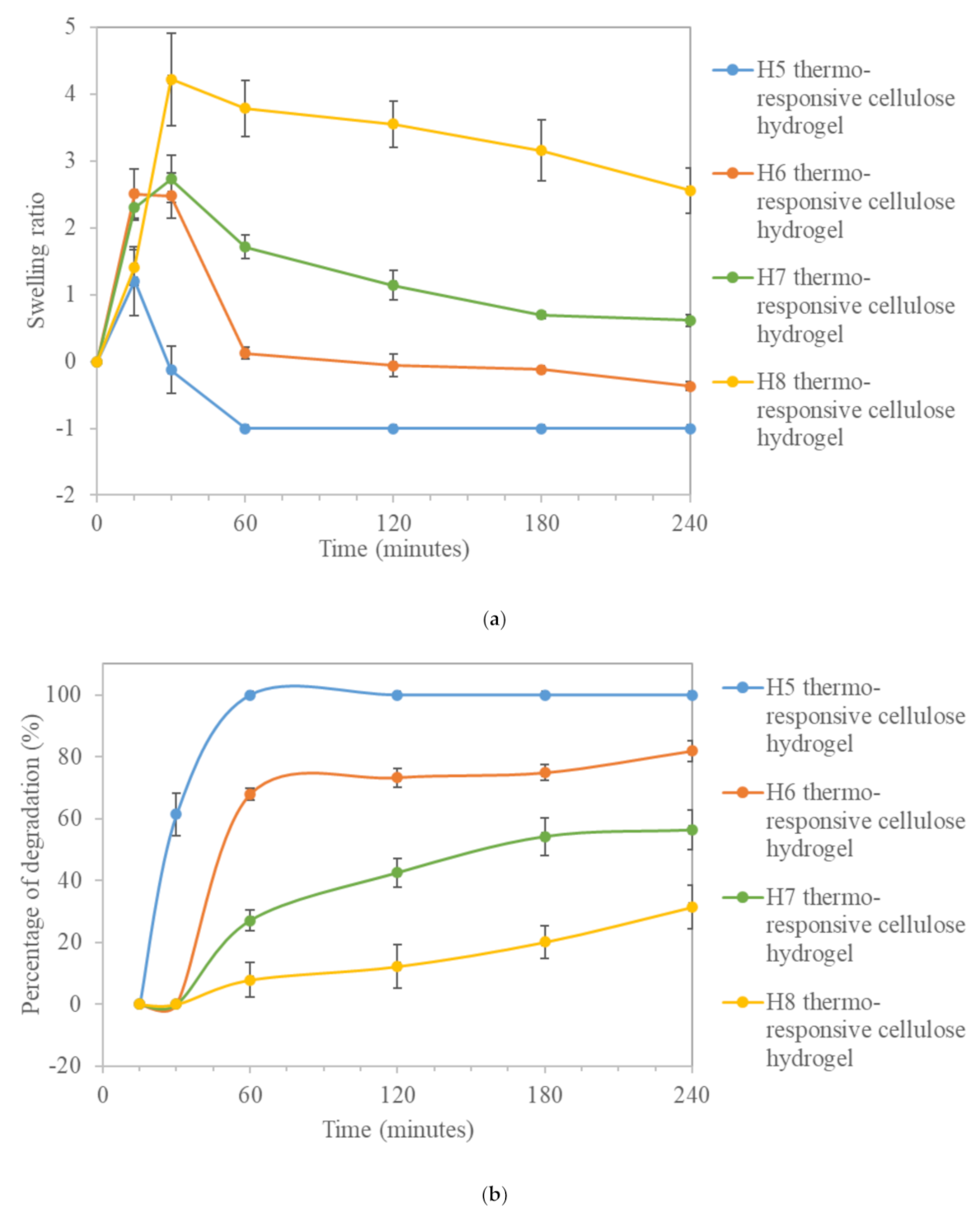 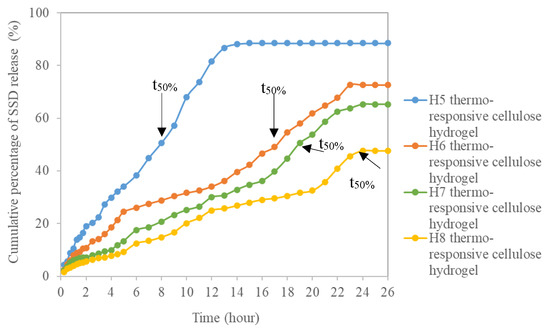 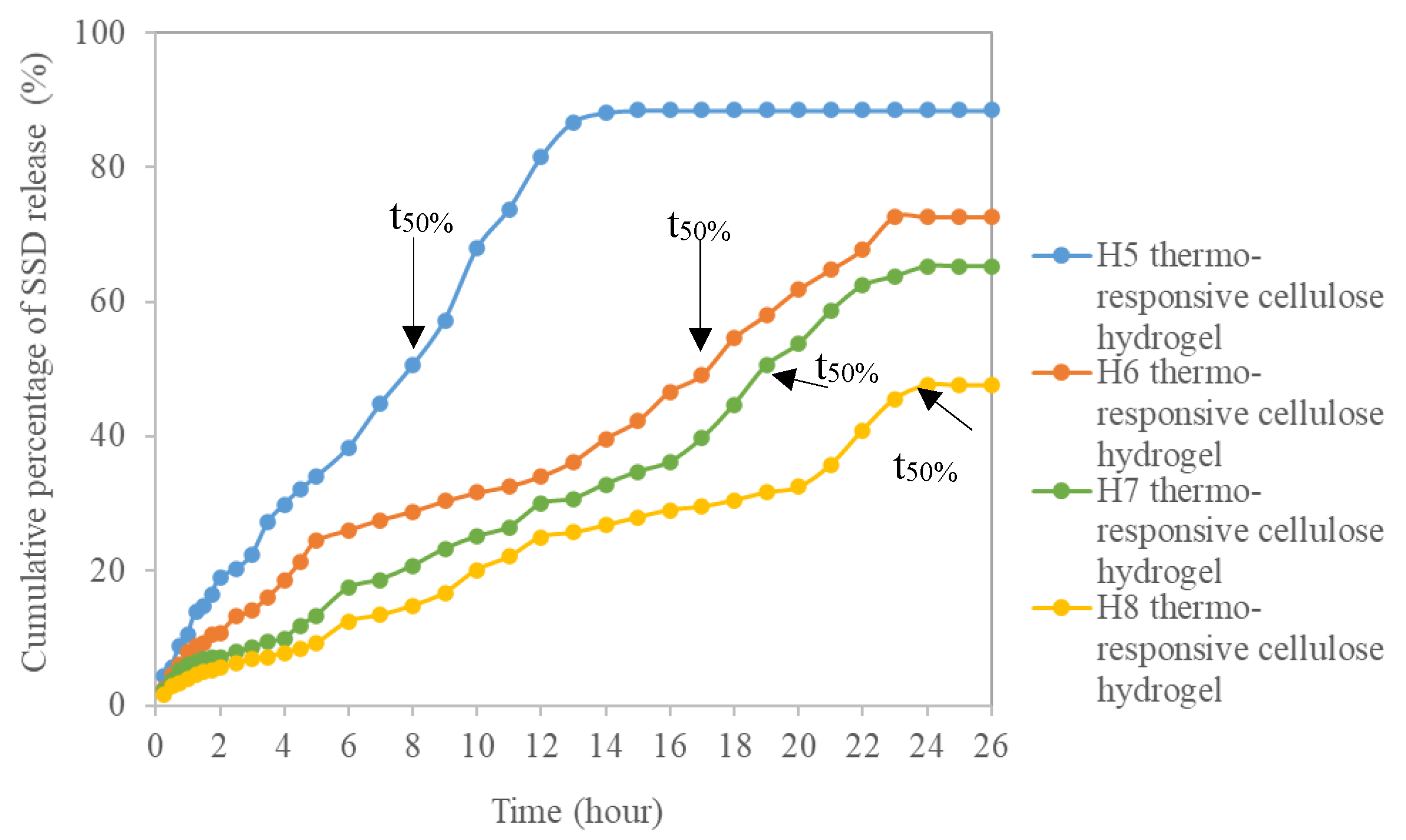