Selection on Sperm Count, but Not on Sperm Morphology or Velocity, in a Wild Population of Anolis Lizards
Previous Article in Journal

Fisher vs. the Worms: Extraordinary Sex Ratios in Nematodes and the Mechanisms that Produce Them

Mammals exhibit a tremendous amount of variation in sperm morphology and despite the acknowledgement of sperm structural diversity across taxa, its functional significance remains poorly understood. Of particular interest is the sperm of rodents. While most Eutherian mammal spermatozoa are relatively simple cells with round or paddle-shaped heads, rodent sperm are often more complex and, in many species, display a striking apical hook. The function of the sperm hook remains largely unknown, but it has been hypothesized to have evolved as an adaptation to inter-male sperm competition and thus has been implicated in increased swimming efficiency or in the formation of collective sperm movements. Here we empirically test these hypotheses within a single lineage of Peromyscus rodents, in which closely related species naturally vary in their mating systems, sperm head shapes, and propensity to form sperm aggregates of varying sizes. We performed sperm morphological analyses as well as in vitro analyses of sperm aggregation and motility to examine whether the sperm hook (i) morphologically varies across these species and (ii) associates with sperm competition, aggregation, or motility. We demonstrate inter-specific variation in the sperm hook and then show that hook width negatively associates with sperm aggregation and sperm swimming speed, signifying that larger hooks may be a hindrance to sperm movement within this group of mice. Finally, we confirmed that the sperm hook hinders motility within a subset of Peromyscus leucopus mice that spontaneously produced sperm with no or highly abnormal hooks. Taken together, our findings suggest that any adaptive value of the sperm hook is likely associated with a function other than inter-male sperm competition, such as interaction with ova or cumulous cells during fertilization, or migration through the complex female reproductive tract. View Full-Text
Keywords: sperm aggregation; sperm morphology; sperm motility sperm aggregation; sperm morphology; sperm motility
►▼ Show Figures 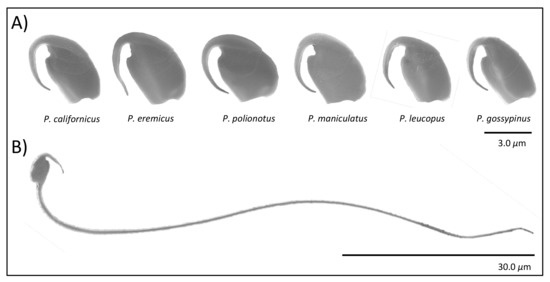 Heidi S. Fisher
Dr. Fisher investigates the evolution of sexually selected traits, and specifically how cooperation, competition and conflict influence the selective regime. The dual nature of sperm cells, as both an extension of the diploid male that produced the gametes and as a unique haploid individual, generates an exceptional research model to study the social interactions within and between levels of biological organization (from sperm to males to populations). Dr. Fisher's work in Peromyscus rodents takes advantage of the extreme divergence in mating strategy within the genus and the wide range of natural phenotypic diversity that results.
Zoom | Orient | As Lines | As Sticks | As Cartoon | As Surface | Previous Scene | Next Scene
We use cookies on our website to ensure you get the best experience. Read more about our cookies here.
Accept
We have just recently launched a new version of our website. Help us to further improve by taking part in this short 5 minute survey here. here.
Never show this again