Associations between ALDH Genetic Variants, Alcohol Consumption, and the Risk of Nasopharyngeal Carcinoma in an East Asian Population
Next Article in Special Issue

Mutations of the GBA gene, encoding for lysosomal enzyme glucocerebrosidase (GCase), are the greatest genetic risk factor for Parkinson’s disease (PD) with frequency between 5% and 20% across the world. N370S and L444P are the two most common mutations in the GBA gene. PD carriers of severe mutation L444P in the GBA gene is characterized by the earlier age at onset compared to N370S. Not every carrier of GBA mutations develop PD during one’s lifetime. In the current study we aimed to find common gene expression signatures in PD associated with mutation in the GBA gene (GBA-PD) using RNA-seq. We compared transcriptome of monocyte-derived macrophages of 5 patients with GBA-PD (4 L444P/N, 1 N370S/N) and 4 asymptomatic GBA mutation carriers (GBA-carriers) (3 L444P/N, 1 N370S/N) and 4 controls. We also conducted comparative transcriptome analysis for L444P/N only GBA-PD patients and GBA-carriers. Revealed deregulated genes in GBA-PD independently of GBA mutations (L444P or N370S) were involved in immune response, neuronal function. We found upregulated pathway associated with zinc metabolism in L444P/N GBA-PD patients. The potential important role of DUSP1 in the pathogenesis of GBA-PD was suggested.
Keywords: Parkinson’s disease; GBA; macrophages; RNA-seq; transcriptome Parkinson’s disease; GBA; macrophages; RNA-seq; transcriptome

Parkinson’s disease (PD) is a neurodegenerative disorder that is characterized by the accumulation of abnormal protein aggregates of alpha-synuclein in the brain [1,2]. Several genetic factors have been associated with an increased risk of PD development. Mutations in the GBA gene are the highest genetic risk factors for PD with an increase of PD risk (of seven to eight times) and with a frequency of 5% to 20% in all populations [3,4]. The GBA gene, encoding the lysosomal enzyme glucocerebrosidase (GCase), is the key enzyme in ceramide metabolism and catalyzes the hydrolysis of glucosylceramide to glucose and ceramide. GCase is expressed in most tissues, especially in the brain, endocrine issue, liver, spleen, skin (https://www.proteinatlas.org, accessed on 21 September 2021). GBA mutations resulted in the most common lysosomal storage disorder (LSD), Gaucher disease (GD), characterized with lysosphingolipid accumulation, presumably in blood macrophages. Generally, the two most common mutations in the GBA gene N370S (c.1226A > G) and L444P (c.1448 T > C) account for 60–70% of the mutant alleles amongst others [4,5]. PD carriers of the severe L444P mutation in the GBA gene are characterized by an earlier age at onset and rapid progression [6] compared to N370S and other mild mutations. The molecular mechanisms of an association between GBA mutations and PD are unclear [7]. We, and others, have previously demonstrated that mutations in the GBA gene lead to a decrease of GCase activity and an increase of blood lysosphingolipid concentration, even in heterozygous carriers of GBA mutations [8,9,10,11]. However, not all carriers of GBA mutations develop PD. GCase dysfunction does not seem to be enough to launch the pathogenic mechanism of PD among GBA mutation carriers.
Transcriptome analysis using next-generation sequencing (RNA-seq) is a powerful method to analyze the genome transcriptomic profile with high-resolution. Although variations in the transcriptome are tissue specific, the blood and brain demonstrated significant gene expression similarities [12,13]. It is worth noting that RNA-seq revealed the difference between transcriptomic profiles in the peripheral blood of symptomatic and asymptomatic G2019S LRRK2 mutation carriers and identified common differentially expression genes functionally involved in the pathways and related with LRRK2-PD pathogenesis, such as Akt signaling, glucose metabolism, or immunity [14,15]. Monocyte-derived macrophages represent one of the most promising models for investigating molecular mechanisms of GCase dysfunction, as this cell type is vulnerable for disturbances in ceramide metabolism [16,17]. In particular, we and others demonstrated high potential of peripheral blood monocyte-derived macrophages to reflect individual sensitivity for drugs influencing GCase activity [18,19]. Here, we first generated the transcriptomic profiles for GBA-PD patients, asymptomatic GBA mutation carriers (GBA carriers), and controls in monocyte-derived macrophages, in order to investigate what variations in monocyte-derived macrophage transcriptomes can be attributed to the presence of GBA mutation and what can be viewed as a trigger of PD in GBA mutation carriers. Our results will be useful to others looking for potential triggers of PD among GBA mutation carriers, and provides future directions for PD preclinical research.

This project was approved by the Pavlov First Saint-Petersburg State Medical University. A formal written consent form was provided to all included subjects to read and sign prior to the study.

Five patients with GBA-PD, four GBA carriers, and four neurologically healthy individuals were enrolled for the current study. Demographic data of the studied groups are summarized in Table 1. Controls had no history of parkinsonism. GBA-PD patients were diagnosed at two neurological clinic centers in St. Petersburg, Russia: Pavlov First Saint-Petersburg State Medical University and the Institute of the Human Brain of RAS. A standard neurologic clinical examination was performed for all participants and the diagnosis of PD was based on previously published criteria [20]. GBA-PD patients were recruited by genotyping of N370S, L444P mutations in the GBA gene among PD patients, as previously described [3]. GBA carriers were collected from first-degree relatives of GD patients at the Research Centre for Medical Genetics where GBA mutations were confirmed by target sequencing of all exons in the GBA gene.

2.2. Differentiation of Human Monocytes to Macrophages

Quality control for each sample was performed by FastQC (v0.11.9) [22] and RSeQC (v4.0.0)) [23]. In this step, clean data (clean reads) were obtained by removing low-quality reads, reads containing adapters, and reads containing ploy-N from raw data. The removal adapter was conducted with Cutadapt [24]. All downstream analyses were based on clean data.

Human reference genome assembly GRCh38 (hg38) and gene model annotation files were downloaded from the Gencode website (https://www.gencodegenes.org/human/ (accessed on 9 September 2021)) directly (release 37). HISAT2 (v2.2.1) [25] was used with default parameters to build the index of the reference genome and mapping reads to the genome.

Counting sequencing reads mapping to each gene after the alignment step was performed using the HTSeq-count function from the HTSeq framework (v.0.6.1) [26].

Gene Ontology (GO) enrichment analysis of differentially expressed genes was performed using GO resource (http://geneontology.org (accessed on 9 September 2021)) and was carried out using the apps ClueGO v. 2.5.7 [28] and CluePedia v. 1.5.3 [29] for Cytoscape v. 3.6.1. GO terms with a corrected p-value of less than 0.05. Term groups were selected by ClueGO based on the number of common genes/terms (>50%). Term clusters were selected based on common genes. A network of selected metabolic processes and DEGs was built using CluePedia v. 1.5.7.

A whole-transcriptome analysis of monocyte-derived macrophages obtained from four patients with L444P/N GBA-PD, three L444P/N GBA carriers, and controls without any GBA mutations (N = 4) was performed. Transcriptome analysis of monocyte-derived macrophages was also conducted for all GBA-PD patients (L444P/N, N = 4, N370S/N, N = 1), and GBA carriers (L444P/N, N = 3, N370S/N, N = 1). Using the Illumina HiSeq 1500 sequencer, we generated 10–14M raw reads, trimming from the 13 samples, with a read length of 50 bp. After strict quality control, more than 20G clean bases were retained. Overall, 21,980 genes were identified in each of the 13 samples. Post-trimming and mapping results for all groups are provided in Table S1. Between 85.20% and 95.97% of the clean reads was aligned to the reference genome. Raw data were subjected to differential expression testing with DESeq2.

3.2. Changes in the Transcriptome Attributed to the Presence of GBA L444P/N Mutation

3.5. Searching the Overlapping DEGs between our and Publicly Available Dataset

To identify the similarities between lists of DEGs from our and previously published studies we used Venn diagram. We revealed overlapping DEGs between list of DEGs from our analysis of GBA-PD (L444P/N +N370S/N) and list of DEGs of G2019S LRRK2-PD from study of Infante and colleagues: two genes encoding monocyte attracting chemokines, such as CCL3L1 gene, in GBA-PD, G2019S LRRK2-PD and PD in comparison with controls, and the CCL3 gene, when comparing GBA-PD to controls and G2019 LRRK2-PD to PD and also, JUNB gene when comparing GBA-PD, GBA-carriers, G2019 LRRK2-PD and G2019 LRRK2-carriers [15]. Dataset of Infante and colleagues’ study is available for download following this link: https://0-ars-els--cdn-com.brum.beds.ac.uk/content/image/1-s2.0-S0197458015005382-mmc1.doc [15] (accessed on 9 September 2021).

In conclusion, this study provides new insights into the global transcriptome in GBA-PD and asymptomatic GBA mutation carriers. Potential involvement of genes of neuronal functions, inflammation, and zinc metabolism in the pathogenesis of GBA-PD was shown. Alteration expression of DUSP1 may be considered a potential biomarker of PD among GBA mutations carriers. This knowledge could assist in answering the fundamental question about potential triggers, which is important for future studies devoted toward determining the pathogenesis of PD among GBA mutations carriers.

The study was supported by the Russian Science Foundation grant No. 19-15-00315.

The study was conducted according to the guidelines of the Declaration of Helsinki, and approved by Local Ethics Committee of Pavlov First Saint-Petersburg State Medical University (Approval Code: 244, Approval Date: 25 January 2021).

Written informed consent has been obtained from the patients to publish this paper.

The authors are grateful to all patients whose participation in the study made this analysis possible. 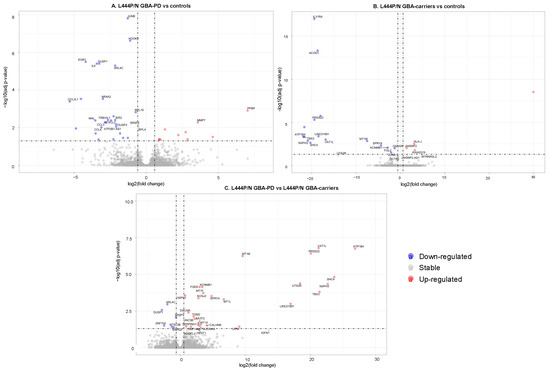 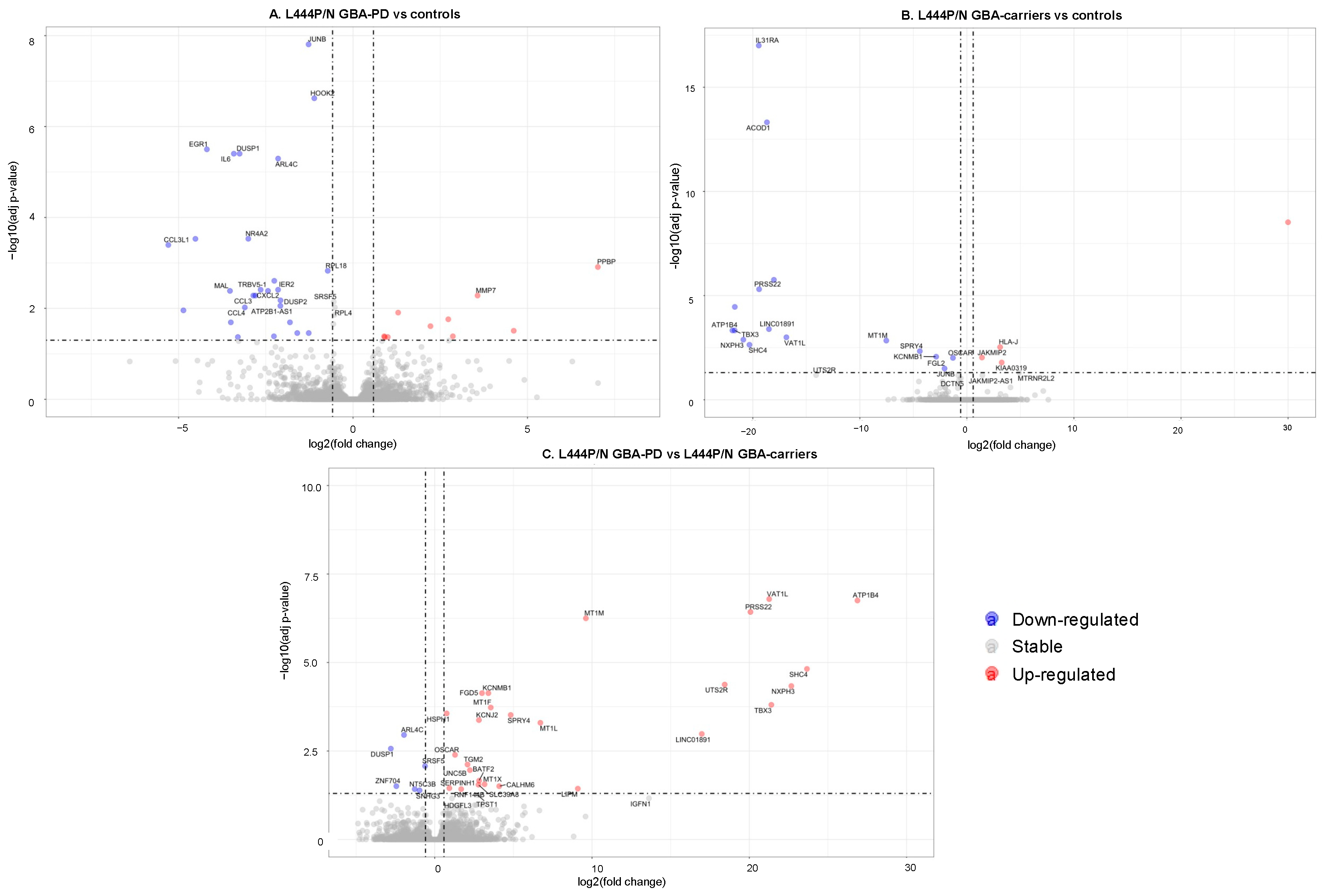 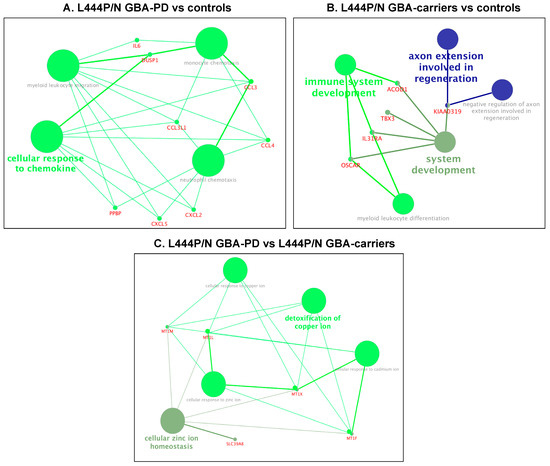 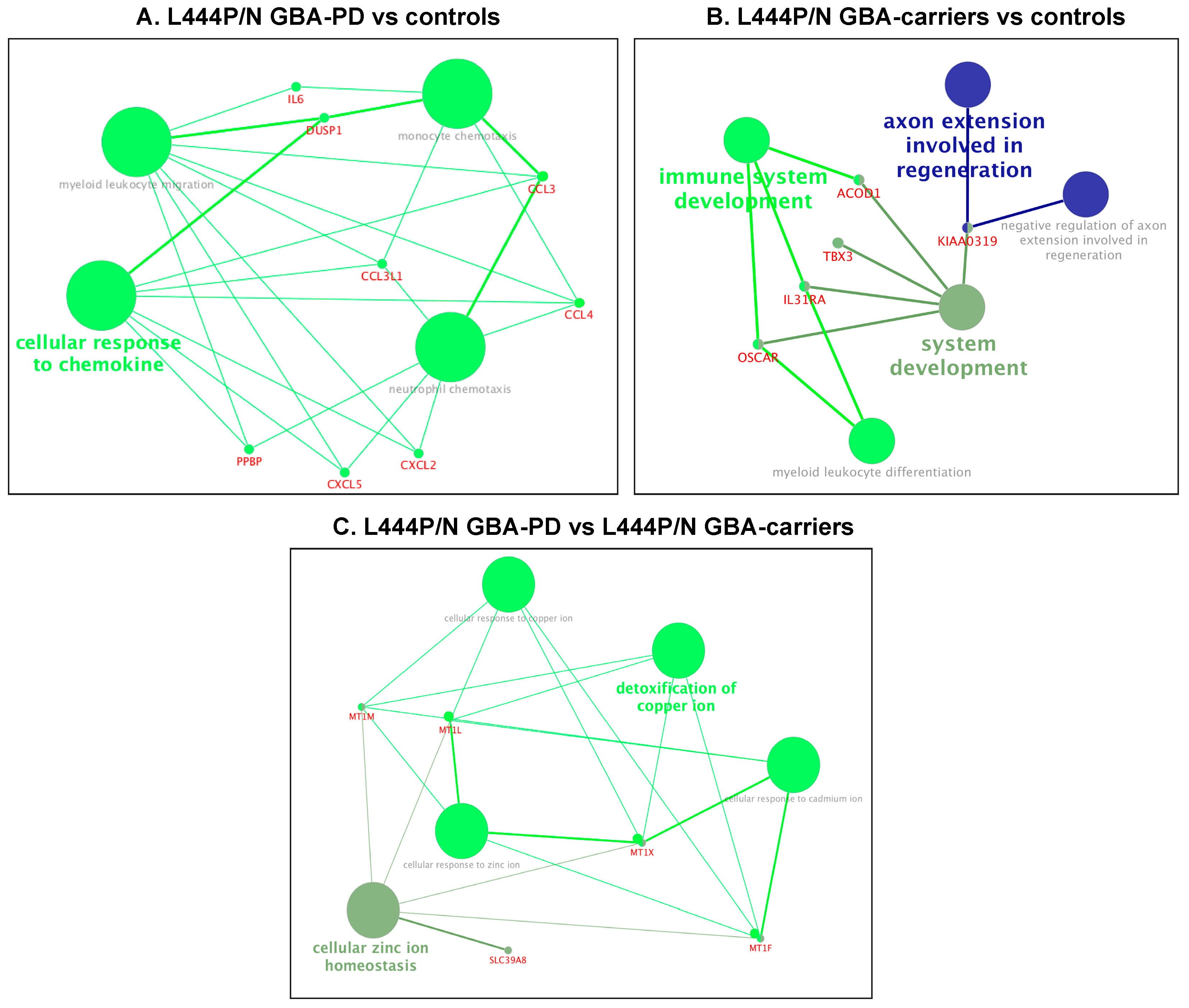 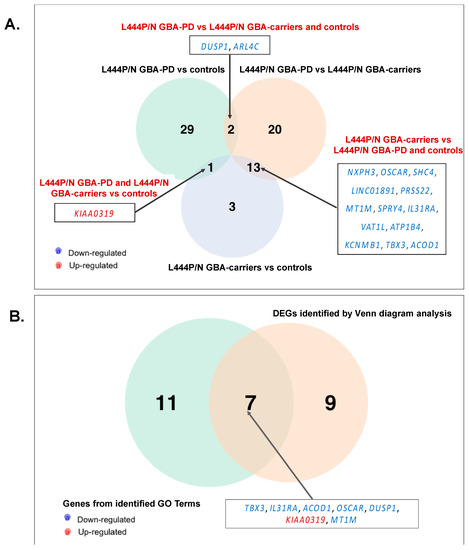 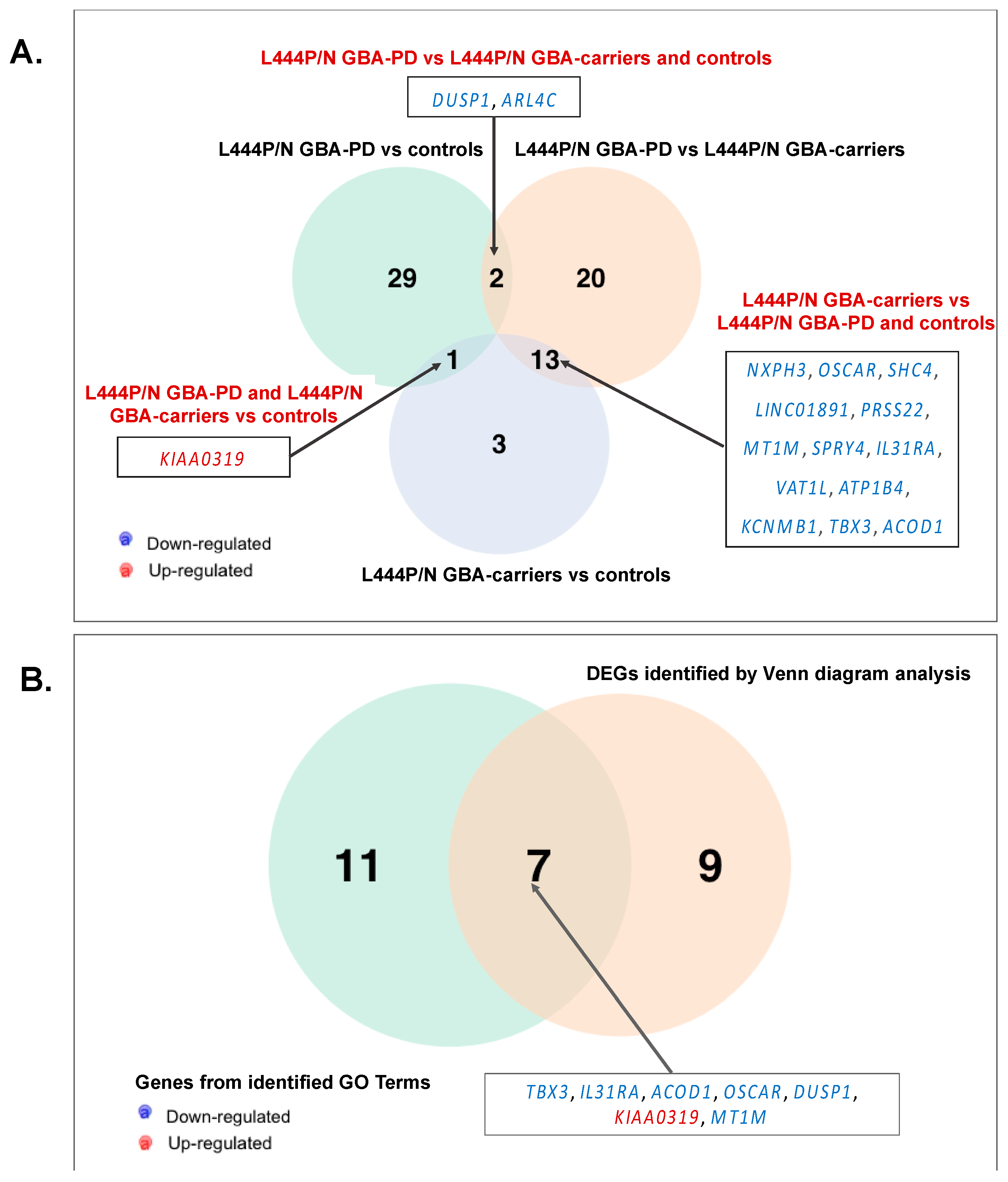 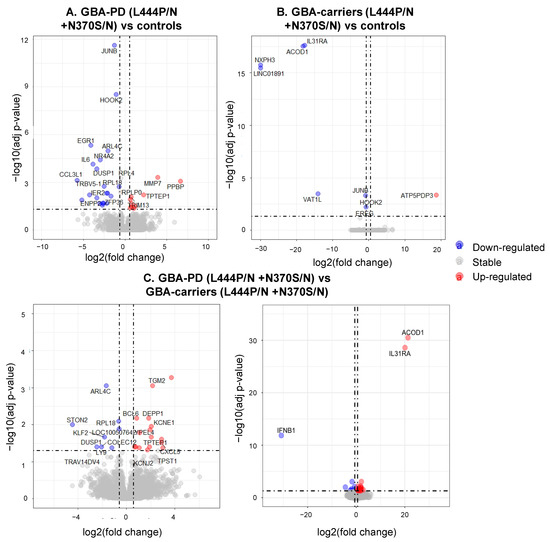 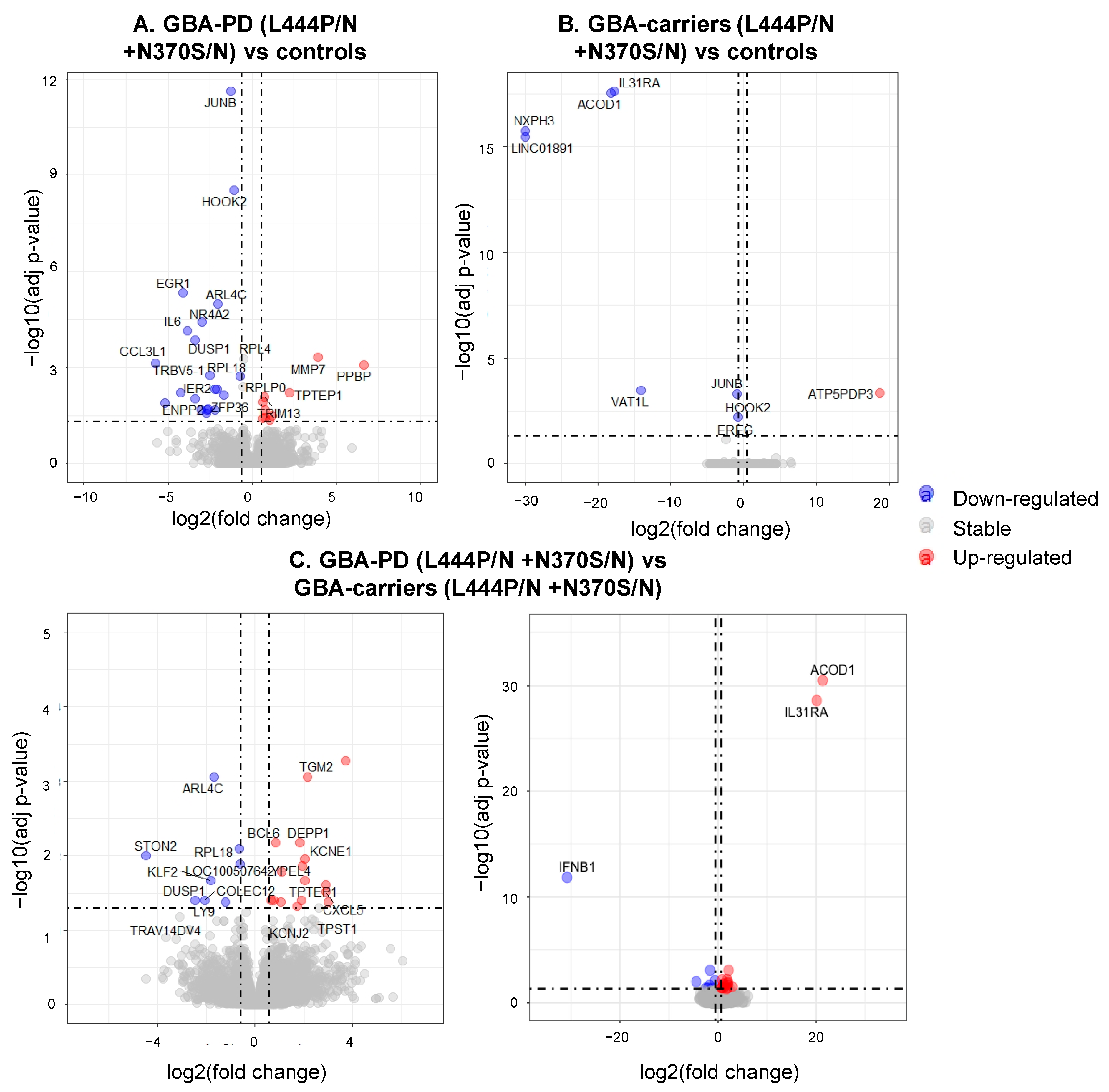 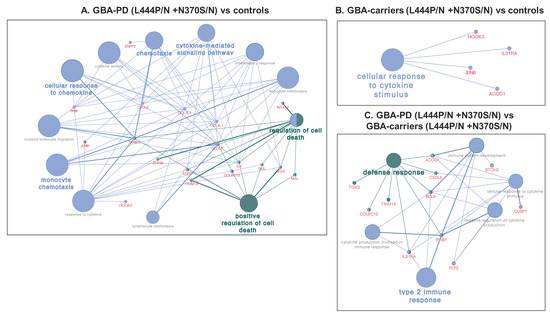 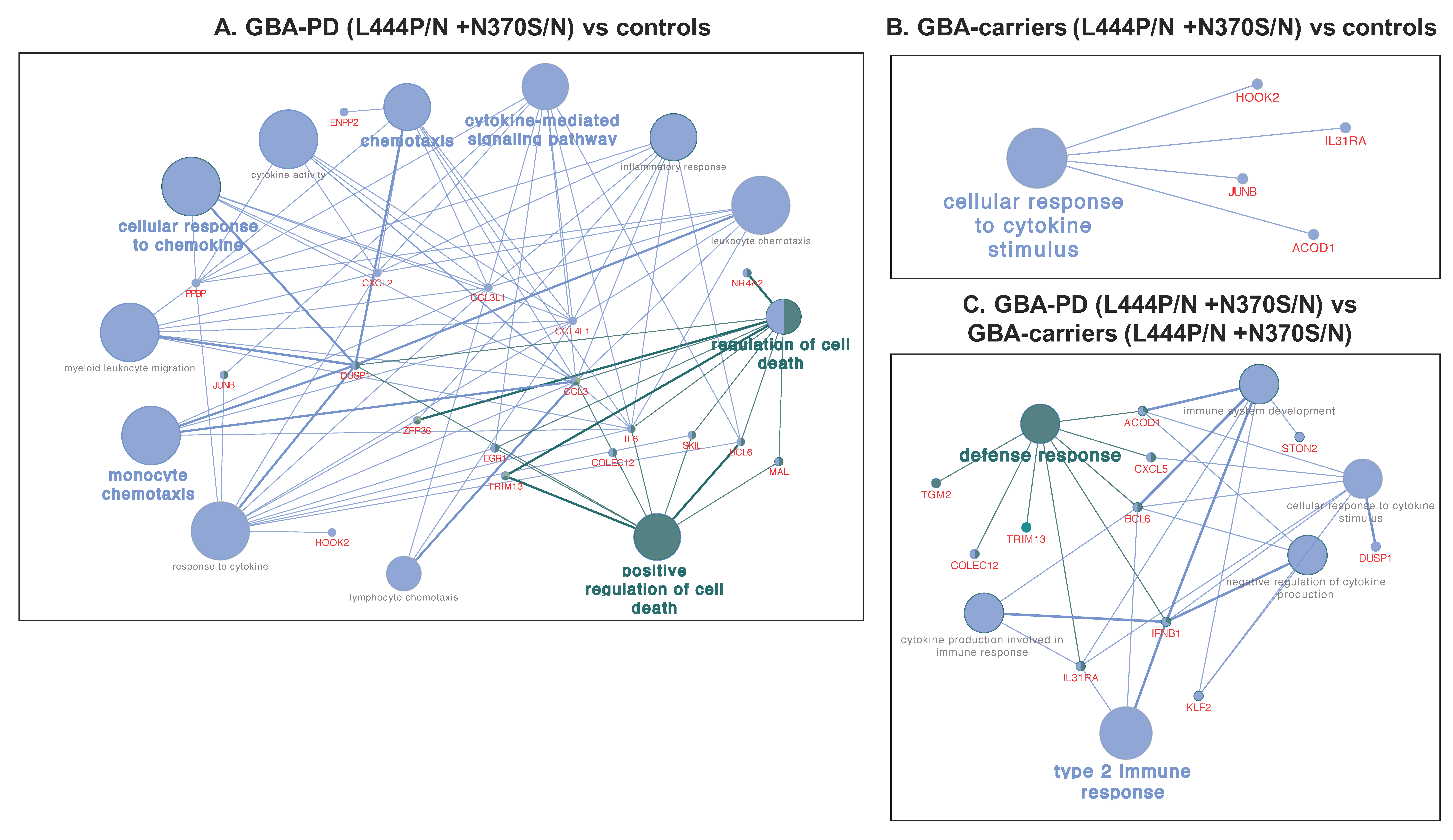 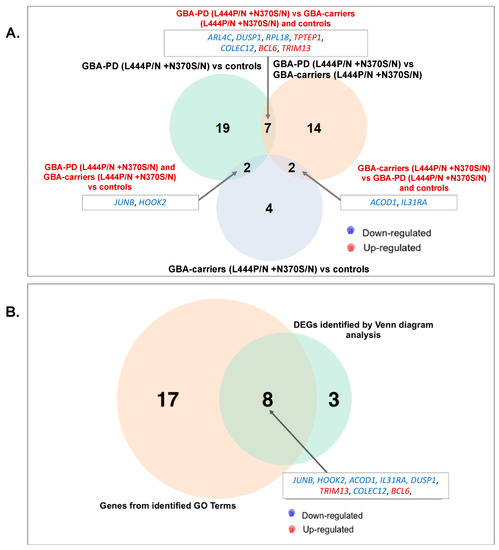 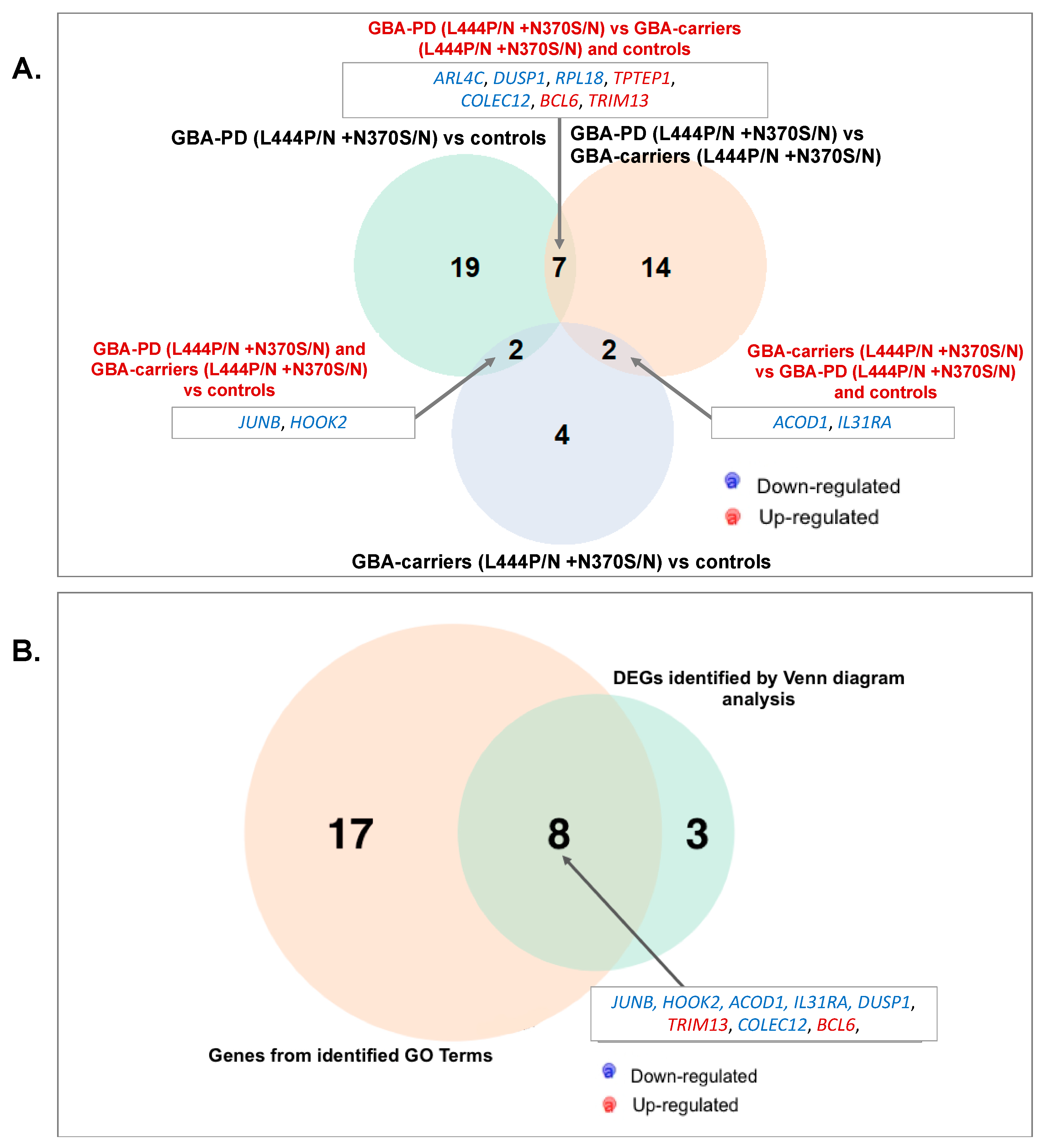