Submit to Genes Review for Genes 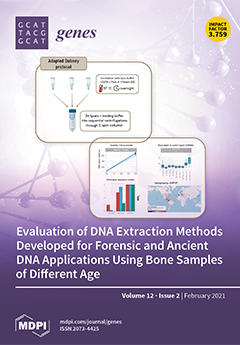 Cover Story (view full-size image): The efficiency of DNA extraction is crucial for genotyping success. This is particularly true for biological specimens that contain minute amounts of DNA, such as bones, which are relevant in archaeogenetic and forensic genetic research. We compare the performance of two DNA extraction protocols that are commonly used in those two disciplines and demonstrate the pros and cons of each method. We also test sampling modifications, such as parallel pooling strategies, to increase DNA yield despite minimizing sample consumption. Our results aid the choice of the preferred DNA extraction method based on marker requirements and bone specimens at hand. View this paper
Previous Issue
Volume 12, January
Next Issue
Volume 12, March
We use cookies on our website to ensure you get the best experience. Read more about our cookies here.
Accept
We have just recently launched a new version of our website. Help us to further improve by taking part in this short 5 minute survey here. here.
Never show this again