In recent years, trafficking and abuse of hallucinogenic mushrooms have become a serious social problem. It is therefore imperative to identify hallucinogenic mushrooms of the genus Psilocybe for national drug control legislation. An internal transcribed spacer (ITS) is a DNA barcoding tool utilized for species identification. Many methods have been used to discriminate the ITS region, but they are often limited by having a low resolution. In this study, we sought to analyze the ITS and its fragments, ITS1 and ITS2, by using high-resolution melting (HRM) analysis, which is a rapid and sensitive method for evaluating sequence variation within PCR amplicons. The ITS HRM assay was tested for specificity, reproducibility, sensitivity, and the capacity to analyze mixture samples. It was shown that the melting temperatures of the ITS, ITS1, and ITS2 of Psilocybe cubensis were 83.72 ± 0.01, 80.98 ± 0.06, and 83.46 ± 0.08 °C, and for other species, we also obtained species-specific results. Finally, we performed ITS sequencing to validate the presumptive taxonomic identity of our samples, and the sequencing output significantly supported our HRM data. Taken together, these results indicate that the HRM method can quickly distinguish the DNA barcoding of Psilocybe cubensis and other fungi, which can be utilized for drug trafficking cases and forensic science. View Full-Text
Keywords: polymerase chain reaction (PCR); high-resolution melting (HRM); DNA barcoding; internal transcribed spacer (ITS); Psilocybe cubensis polymerase chain reaction (PCR); high-resolution melting (HRM); DNA barcoding; internal transcribed spacer (ITS); Psilocybe cubensis
►▼ Show Figures 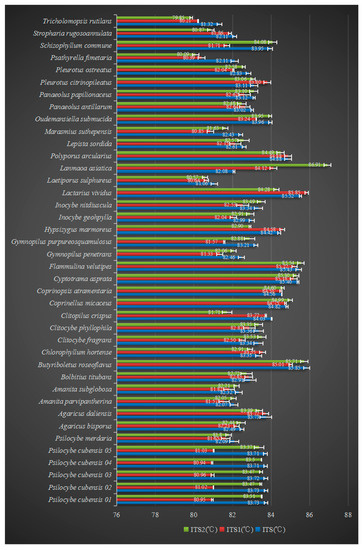