Uracil is an unavoidable aberrant base in DNA sequences, the repair of which takes place by a highly efficient base excision repair mechanism. The removal of uracil from the genome requires multiple biochemical steps with conformational changes of DNA that inhibit DNA replication and interfere with transcription. However, the relevance of uracil in DNA for cellular physiology and transcriptional regulation is not fully understood. We investigated the functional roles of SMUG1 using knock-down (KD) and knock-out (KO) models. The proliferation ratio of SMUG1 KD and KO cells was decreased compared to WT control cells, and the cell cycle was arrested in the G2/M phases before the transition to mitosis. The apoptotic cell death was increased in KD and KO cell lines through the increase of BAX and active caspase 3 expression. Phospho-gamma-H2AX expression, which reflected accumulated DNA damage, was also increased in KO cells. Moreover, the apoptotic cells by DNA damage accumulation were markedly increased in SMUG1 KD and KO cells after ultraviolet C irradiation. Transcriptomic analysis using RNA-seq revealed that SMUG1 was involved in gene sets expression including cell cycle transition and chromatin silencing. Together, the results implicate SMUG1 as a critical factor in cell cycle and transcriptional regulation. View Full-Text
Keywords: SMUG1; knock-out; RNA-seq; proliferation; DNA damage repair SMUG1; knock-out; RNA-seq; proliferation; DNA damage repair
►▼ Show Figures 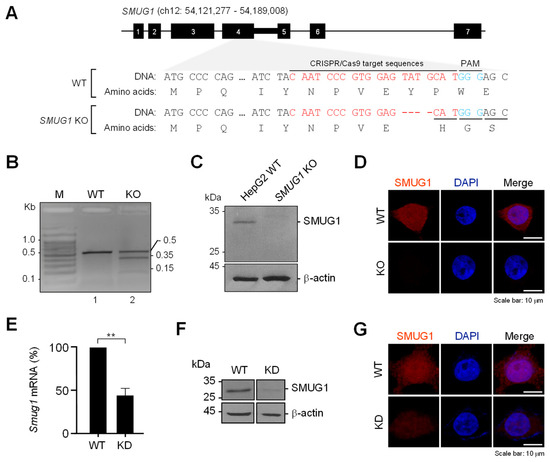