Dog10K_Boxer_Tasha_1.0: A Long-Read Assembly of the Dog Reference Genome
Previous Article in Journal

Congenital deafness is prevalent among modern dog breeds, including Australian Stumpy Tail Cattle Dogs (ASCD). However, in ASCD, no causative gene has been identified so far. Therefore, we performed a genome-wide association study (GWAS) and whole genome sequencing (WGS) of affected and normal individuals. For GWAS, 3 bilateral deaf ASCDs, 43 herding dogs, and one unaffected ASCD were used, resulting in 13 significantly associated loci on 6 chromosomes, i.e., CFA3, 8, 17, 23, 28, and 37. CFA37 harbored a region with the most significant association (−log10(9.54 × 10−21) = 20.02) as well as 7 of the 13 associated loci. For whole genome sequencing, the same three affected ASCDs and one unaffected ASCD were used. The WGS data were compared with 722 canine controls and filtered for protein coding and non-synonymous variants, resulting in four missense variants present only in the affected dogs. Using effect prediction tools, two variants remained with predicted deleterious effects within the Heart development protein with EGF like domains 1 (HEG1) gene (NC_006615.3: g.28028412G>C; XP_022269716.1: p.His531Asp) and Kruppel-like factor 7 (KLF7) gene (NC_006619.3: g.15562684G>A; XP_022270984.1: p.Leu173Phe). Due to its function as a regulator in heart and vessel formation and cardiovascular development, HEG1 was excluded as a candidate gene. On the other hand, KLF7 plays a crucial role in the nervous system, is expressed in the otic placode, and is reported to be involved in inner ear development. 55 additional ASCD samples (28 deaf and 27 normal hearing dogs) were genotyped for the KLF7 variant, and the variant remained significantly associated with deafness in ASCD (p = 0.014). Furthermore, 24 dogs with heterozygous or homozygous mutations were detected, including 18 deaf dogs. The penetrance was calculated to be 0.75, which is in agreement with previous reports. In conclusion, KLF7 is a promising candidate gene causative for ASCD deafness. View Full-Text
Keywords: deafness; kruppel-like factor 7; genome wide association study; Australian stumpy tail cattle dog; brainstem auditory evoked response deafness; kruppel-like factor 7; genome wide association study; Australian stumpy tail cattle dog; brainstem auditory evoked response
►▼ Show Figures 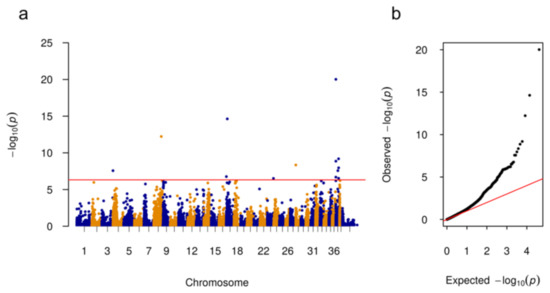