No Time to Age: Uncoupling Aging from Chronological Time

Multicellular life evolved from simple unicellular organisms that could replicate indefinitely, being essentially ageless. At this point, life split into two fundamentally different cell types: the immortal germline representing an unbroken lineage of cell division with no intrinsic endpoint and the mortal soma, which ages and dies. In this review, we describe the germline as clock-free and the soma as clock-bound and discuss aging with respect to three DNA-based cellular clocks (telomeric, DNA methylation, and transposable element). The ticking of these clocks corresponds to the stepwise progressive limitation of growth and regeneration of somatic cells that we term somatic restriction. Somatic restriction acts in opposition to strategies that ensure continued germline replication and regeneration. We thus consider the plasticity of aging as a process not fixed to the pace of chronological time but one that can speed up or slow down depending on the rate of intrinsic cellular clocks. We further describe how germline factor reprogramming might be used to slow the rate of aging and potentially reverse it by causing the clocks to tick backward. Therefore, reprogramming may eventually lead to therapeutic strategies to treat degenerative diseases by altering aging itself, the one condition common to us all.
Keywords: aging; cellular clocks; reprogramming; development; epigenetics; DNA methylation; telomeres; transposable elements; longevity; regeneration aging; cellular clocks; reprogramming; development; epigenetics; DNA methylation; telomeres; transposable elements; longevity; regeneration

Whether or not aging is programmed or is the result of accumulated damage has been the subject of debate for many decades. Early twentieth-century theories favoring programming proposed that aging was a consequence of differentiation as put forth by Minot [1] or factors leading to the cessation of growth as proposed by Bidder [2]. The evolution of a genetic program for aging seemed unlikely because there is little selective pressure for gene variants once reproductive maturity is reached. However, Williams proposed that aging is the result of antagonistic pleiotropy, where mutations that are adaptive for fitness in early life but deleterious after reproduction would accumulate in the gene pool because there is little selective pressure to eliminate them [3]. In contrast, aging theories of the late twentieth century focused largely on “wear and tear”, suggesting aging results from the stochastic accumulation of damage, such as cellular waste, oxidative damage, DNA mutations, and misfolded proteins [4,5]. However, the vast range of adult lifespans among animal species from hours (mayfly), days (fruit fly), or weeks (dwarf pygmy goby) to as long as centuries (Aldabra giant tortoise, bowhead whale, Greenland shark), as well as examples of indefinite lifespans with no apparent intrinsic aging (hydra, planaria, sponge, mussel), suggests that underlying genetic programs must play a pivotal role [6,7]. Indeed, the wide variation in lifespan even between closely related species underscores the notion that aging is plastic and depends upon a balance between intrinsic cellular strategies that maintain genetic and epigenetic integrity and the effects of “wear and tear”. We have previously described the stepwise progressive loss of regenerative germline strategies in mortal somatic cells (somatic restriction) as an underlying cause of organismic decline associated with aging [8]. In contrast, we see in the regeneration of the immortal germline the potential for life to be uncoupled from time, and therefore free from aging. The fact that there can be an uncoupling of life from the fixed progression of chronological time as seen in the germline hints at the basis by which aging can be accelerated, decelerated, and perhaps most astonishingly reversed altogether.
In his germ plasma theory, the 19th-century biologist, August Weismann, described a division of labor in cellular life that enabled the evolution of complex multicellular life forms that make up the tremendous diversity of life we see today [9]. To make the leap from simple unicellular organisms to complex metazoans, life evolved into two fundamentally different types of cells consisting of the mortal cells of the soma or body, which eventually ages and dies, and the immortal self-renewing germline cells that carry the hereditary information forward to the next generation. Well over half a century before the discovery of cellular senescence, DNA, telomeres, and telomerase, Weismann predicted the limited cellular lifespan of somatic cells in contrast to cells of the germline, which have no intrinsic end to their replicative lifespan. He further asserted that “there is nothing inherent in life that implies death [9].” Aristotle wrote, “Things which are always are not, as such, in time nor is there being measured by time … none of them is affected by time, which indicates they are not in time.” In this sense, Weismann understood that life is not bound by time. To illustrate the evolutionary split of the soma and germline, Weismann described two genera of volvox, one of the simplest multicellular organisms (Figure 1). Pandorina morum consists of a simple ball of identical cells (Figure 1A) that reproduces by budding off smaller clusters of cells, and Volvox minor consists of a hollow sphere of cells (Figure 1B) that contains the simpler balls of germline cells within it. As the germline clusters grow larger, they trigger the sphere to wither and die and thus release the next generation of volvox. Accordingly, we see in the evolution of volvox, cells that exhibit a division of labor into immortal germline (embryonic balls of cells) and mortal soma (hollow sphere of cells). The germline can forever renew itself, giving birth to young organisms at each generation, and thus, we refer to germline cells as clock-free and somatic cells as clock-bound. Indeed, we can trace an unbroken chain of cell division from all life on earth going back 4 billion years to converge at the base of the evolutionary tree to a single cell, LUCA, the “last universal common ancestor” [10]. In contrast, somatic cells lose their robustness with time exhibiting the hallmarks of aging [11], which eventually lead to organismal degeneration and an exponential increase in the probability of death with the passage of time [12]. In this review, we will explore the nature of three somatic cellular clocks (telomeric, DNA methylation (DNAm), and transposable element (TE)) and the germline strategies used to become clock-free or unbound from chronological time. We also consider the relationship of aging to development and we describe remarkable examples of phenotypic plasticity seen in lower multicellular organisms that appear to reverse development. Finally, we discuss how this plasticity can be revived in higher animals using cell reprogramming technology aimed at conferring germline qualities onto the soma and how these methods might be applied to reverse aging and extend health span and lifespan.

In this review, we have described three cellular clocks that bind somatic cells to time and compared this with the immortal germline, which in its capacity for indefinite renewal, is uncoupled from time. We have also discussed the plasticity of the aging clocks that tick faster in accelerated aging or slower in decelerated aging. The initiation of the DNAm aging clock, the telomeric clock, and perhaps other clocks at the beginning of development suggests an intimate relationship between development and aging. Indeed, the adaptation of developmental clock rate to environmental pressure could account for the wide variation in lifespan observed between species. For example, humans and mole-rats exhibit neoteny, where slowing the rate of development correlates with an extension of lifespan. The application of germline strategies in somatic stem cells has resulted in the remarkable regenerative capacity of lower life forms that are capable of indefinite lifespans, such as sponges, planarians, and hydra. This regenerative capacity has become increasingly restricted as more complex life forms evolved, being confined to the pre-EFT period in mammals. However, retention of extensive capacity for regeneration is observed in lower vertebrates, including fishes, amphibians, and reptiles, which also exhibit remarkable phenotypic plasticity in their capacity for metamorphosis and in certain cases of remarkable reversals of developmental stage and sexual development. Finally, reprogramming using germline factors can uncover a similar but latent phenotypic plasticity in mammals by reverting both the developmental state and cellular age. Indeed, both natural phenotypic plasticity in the blue wrasse and partial reprogramming involve the repression of DNA methyl transferases (DNMT) and induction of demethylases (TET) which, by a yet-to-be-determined mechanism, may enable the DNAm clock to tick backward. The discovery that partial reprogramming can reverse the aging clock without permanent alteration of cellular identity has led to initial studies that demonstrate the potential to reverse organismic aging. Although there are many challenges ahead, our current understanding of cellular clocks and our ability to reprogram them using germline factors opens the door to many promising therapeutic approaches to slowing down, preventing, or reversing aging itself and thus treating the many age-related diseases that burden society. Indeed, if these approaches can be made practical and scalable, we may find ourselves in a future in which we have no time to age. 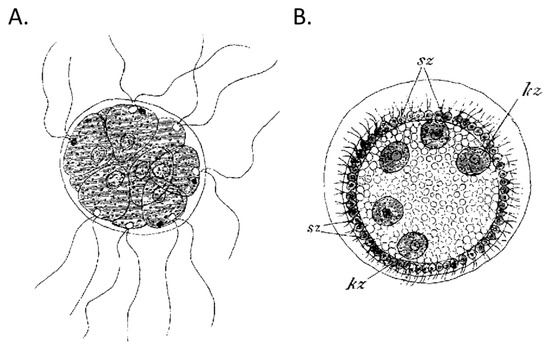 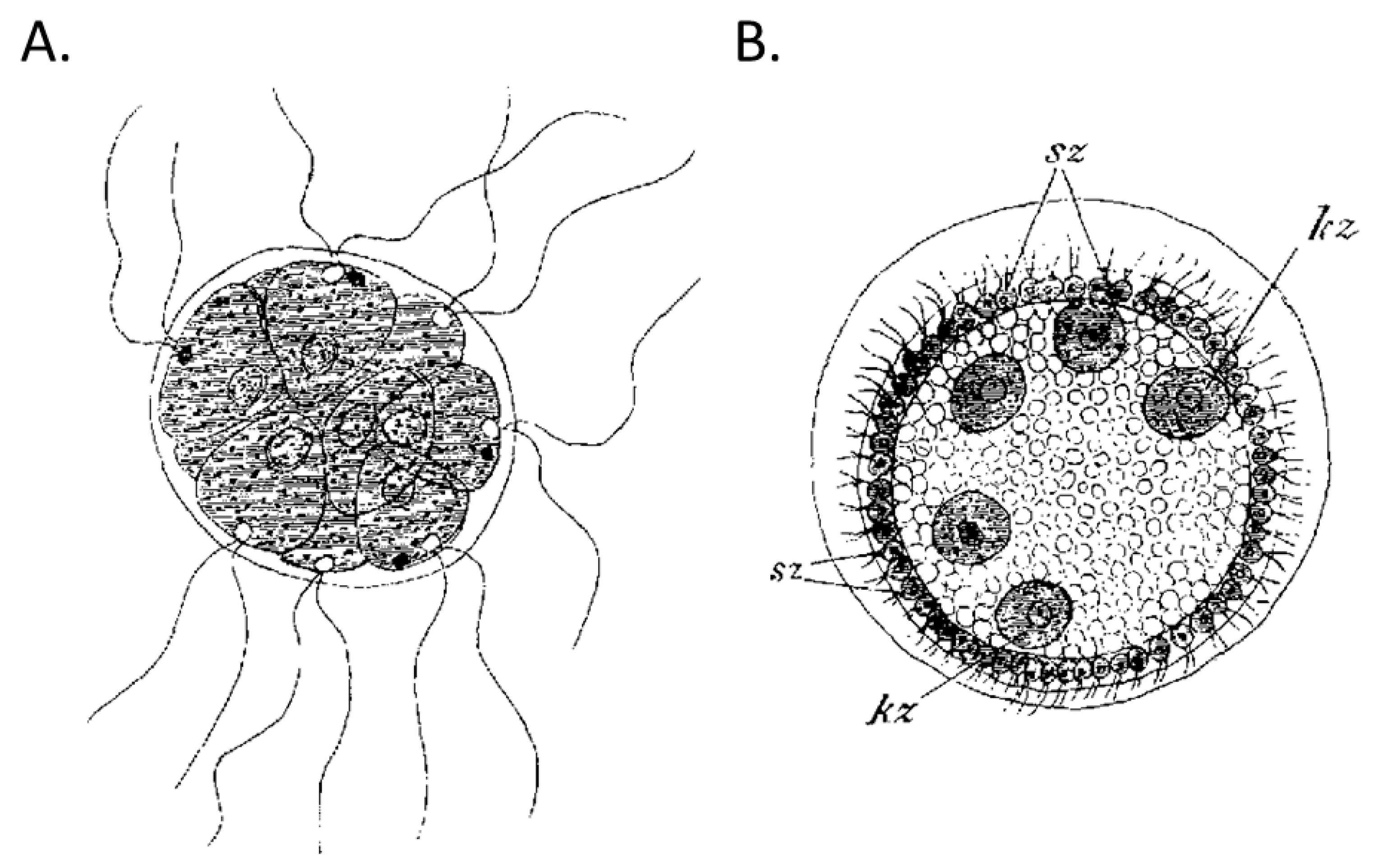 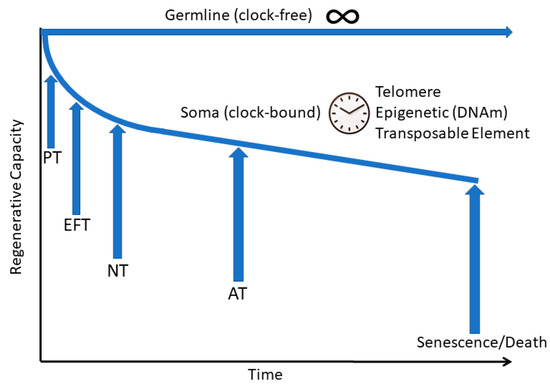 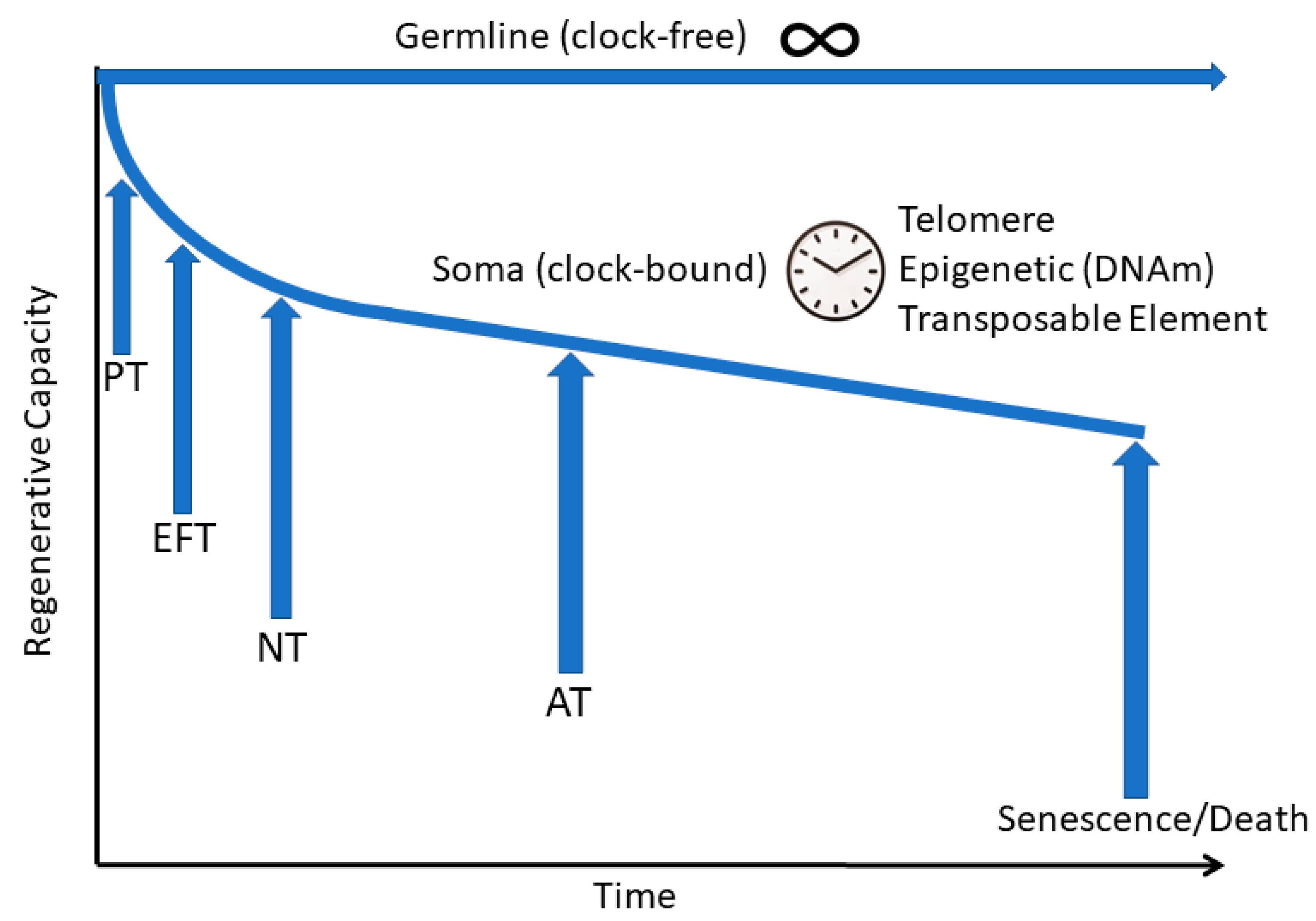 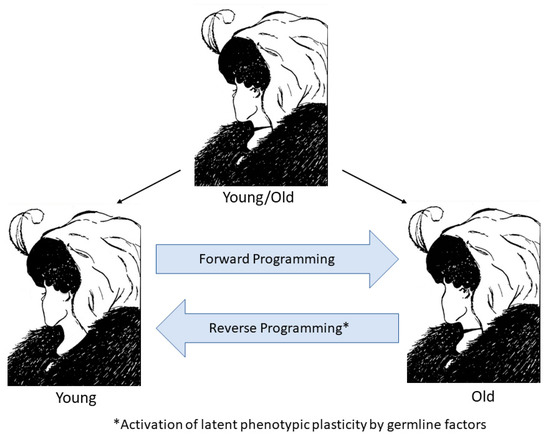 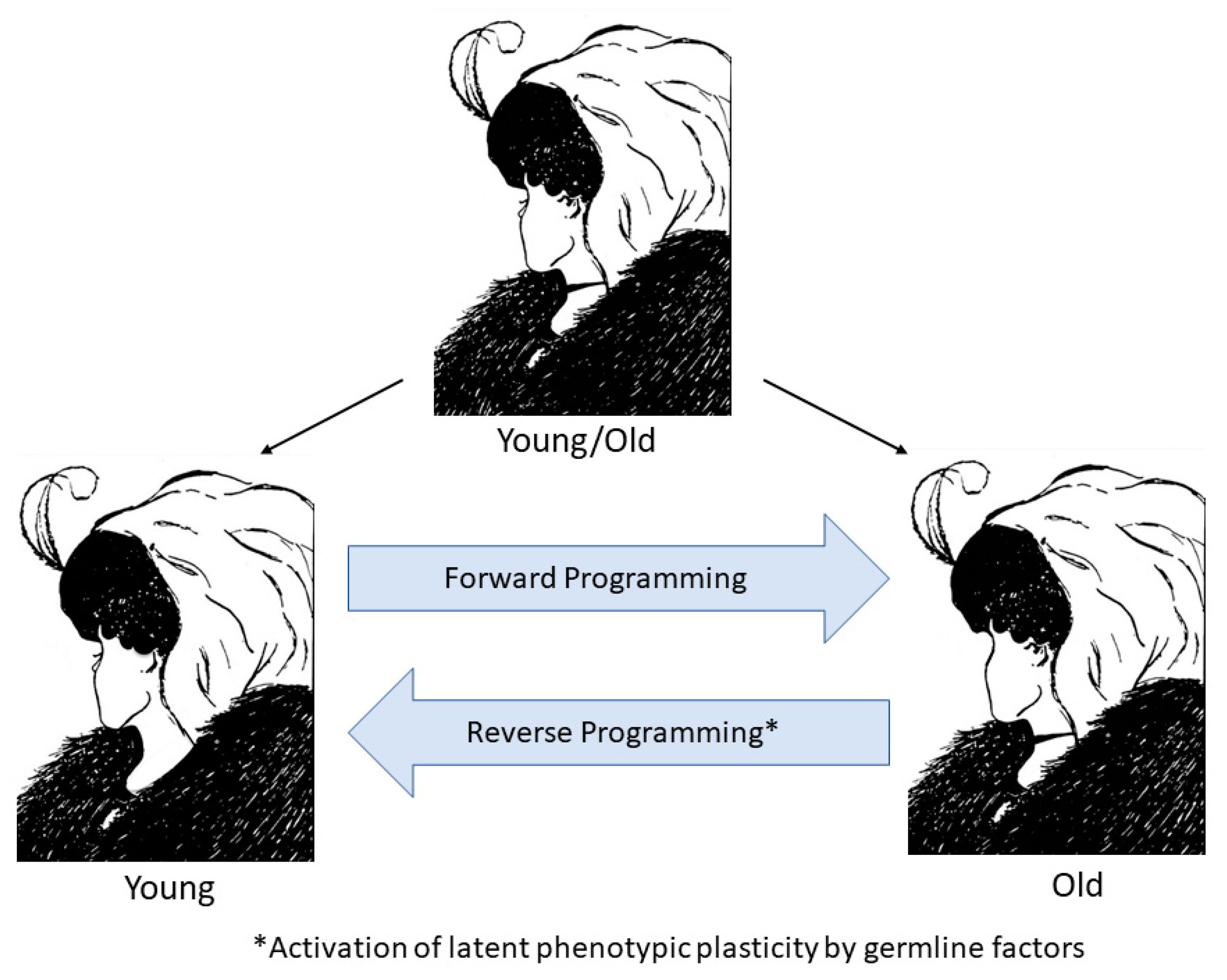 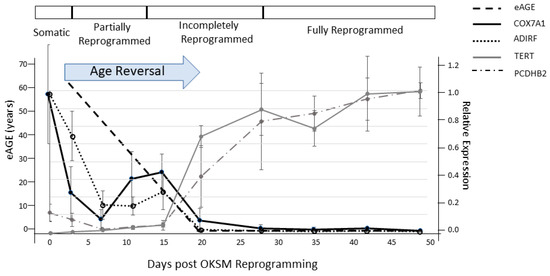 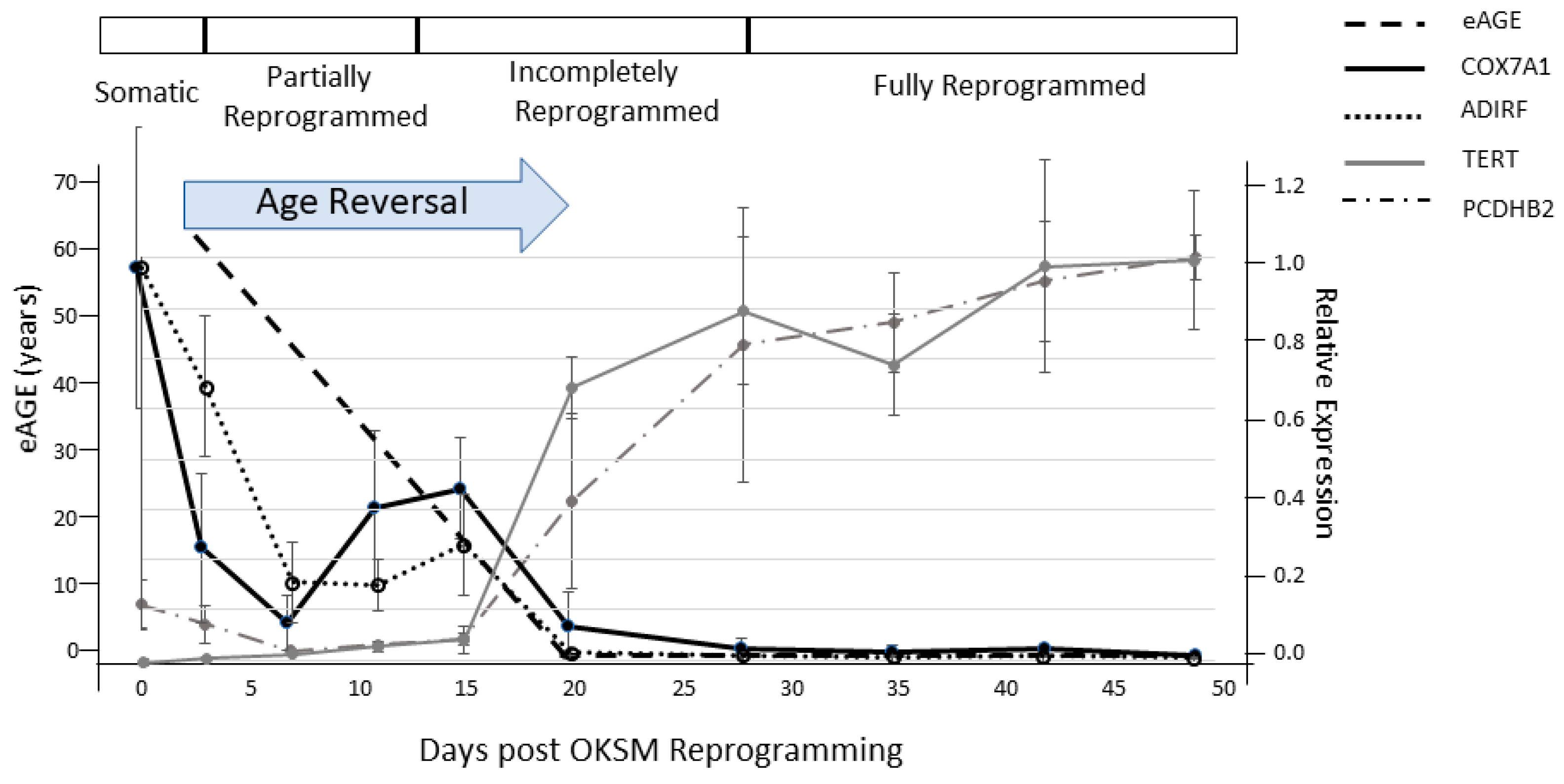