Vitamin D-binding protein (VDBP) is encoded by the GC gene and is an active participant in the control of bone metabolism. However, the effect of its major variants on VDBP concentration and bone mineral density (BMD) remains unclear. Our aim was to analyze the effect of major GC variants on serum VDBP concentration and BMD. We recruited individuals from the Health Workers Cohort Study, which includes employees of the Mexican Institute of Social Security (IMSS). A total of 1853 adults were included. The single nucleotide polymorphisms (SNPs) rs7041 and rs4588 were genotyped to identify the three best characterized haplotypes of GC. Serum VBDP, 25(OH)D and BMD were also measured. Among women, the G allele of rs7041 was associated with higher VDBP and BMD compared to homozygous TT. The A allele of rs4588 was associated with lower VDBP and BMD compared to CC homozygous. In men, GC variants were only associated with VDBP levels. We did not observe an association between free/bioavailable 25(OH)D and BMD in men and women. Our results support an association of VDBP in bone health. The G and C alleles, from rs7041 and rs4588, respectively, are associated with high concentrations of VDBP and BMD in this sample of Mexican postmenopausal women. View Full-Text
Keywords: GC gene; vitamin D binding protein; bone mineral density; Mexican population; sex GC gene; vitamin D binding protein; bone mineral density; Mexican population; sex
►▼ Show Figures 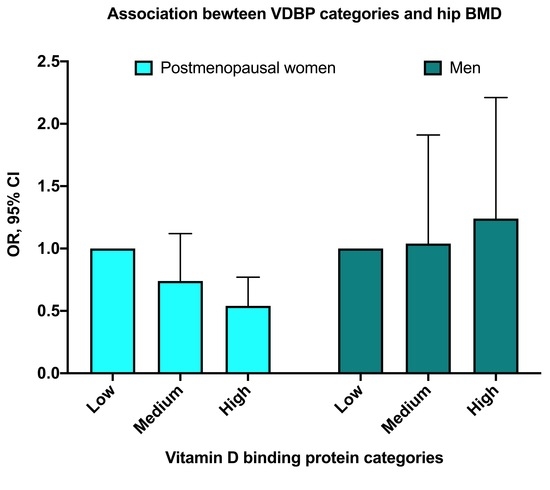