Systematic Analysis of the 4-Coumarate:Coenzyme A Ligase (4CL) Related Genes and Expression Profiling during Fruit Development in the Chinese Pear

In plants, 4-coumarate:coenzyme A ligases (4CLs), comprising some of the adenylate-forming enzymes, are key enzymes involved in regulating lignin metabolism and the biosynthesis of flavonoids and other secondary metabolites. Although several 4CL-related proteins were shown to play roles in secondary metabolism, no comprehensive study on 4CL-related genes in the pear and other Rosaceae species has been reported. In this study, we identified 4CL-related genes in the apple, peach, yangmei, and pear genomes using DNATOOLS software and inferred their evolutionary relationships using phylogenetic analysis, collinearity analysis, conserved motif analysis, and structure analysis. A total of 149 4CL-related genes in four Rosaceous species (pear, apple, peach, and yangmei) were identified, with 30 members in the pear. We explored the functions of several 4CL and acyl-coenzyme A synthetase (ACS) genes during the development of pear fruit by quantitative real-time PCR (qRT-PCR). We found that duplication events had occurred in the 30 4CL-related genes in the pear. These duplicated 4CL-related genes are distributed unevenly across all pear chromosomes except chromosomes 4, 8, 11, and 12. The results of this study provide a basis for further investigation of both the functions and evolutionary history of 4CL-related genes. View Full-Text
Keywords: 4-coumarate:coenzyme A ligases (4CL); acyl-coenzyme A synthetase (ACS); pear; gene family; qRT-PCR 4-coumarate:coenzyme A ligases (4CL); acyl-coenzyme A synthetase (ACS); pear; gene family; qRT-PCR
►▼ Show Figures 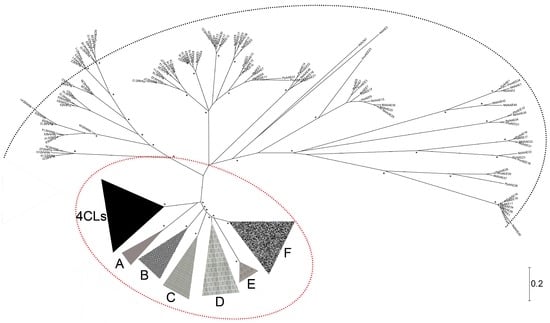