Telomerase: The Devil Inside
Previous Article in Journal / Special Issue

Telomere length and cell function can be preserved by the human reverse transcriptase telomerase (hTERT), which synthesizes the new telomeric DNA from a RNA template, but is normally restricted to cells needing a high proliferative capacity, such as stem cells. Consequently, telomerase-based therapies to elongate short telomeres are developed, some of which have successfully reached the stage I in clinical trials. Telomerase is also permissive for tumorigenesis and 90% of all malignant tumors use telomerase to obtain immortality. Thus, reversal of telomerase upregulation in tumor cells is a potential strategy to treat cancer. Natural and small-molecule telomerase inhibitors, immunotherapeutic approaches, oligonucleotide inhibitors, and telomerase-directed gene therapy are useful treatment strategies. Telomerase is more widely expressed than any other tumor marker. The low expression in normal tissues, together with the longer telomeres in normal stem cells versus cancer cells, provides some degree of specificity with low risk of toxicity. However, long term telomerase inhibition may elicit negative effects in highly-proliferative cells which need telomerase for survival, and it may interfere with telomere-independent physiological functions. Moreover, only a few hTERT molecules are required to overcome senescence in cancer cells, and telomerase inhibition requires proliferating cells over a sufficient number of population doublings to induce tumor suppressive senescence. These limitations may explain the moderate success rates in many clinical studies. Despite extensive studies, only one vaccine and one telomerase antagonist are routinely used in clinical work. For complete eradication of all subpopulations of cancer cells a simultaneous targeting of several mechanisms will likely be needed. Possible technical improvements have been proposed including the development of more specific inhibitors, methods to increase the efficacy of vaccination methods, and personalized approaches. Telomerase activation and cell rejuvenation is successfully used in regenerative medicine for tissue engineering and reconstructive surgery. However, there are also a number of pitfalls in the treatment with telomerase activating procedures for the whole organism and for longer periods of time. Extended cell lifespan may accumulate rare genetic and epigenetic aberrations that can contribute to malignant transformation. Therefore, novel vector systems have been developed for a ‘mild’ integration of telomerase into the host genome and loss of the vector in rapidly-proliferating cells. It is currently unclear if this technique can also be used in human beings to treat chronic diseases, such as atherosclerosis.
Keywords: telomerase; telomeres; aging; senescence; atherosclerosis; cancer; gene therapy; immunotherapy; regenerative medicine; personalized medicine telomerase; telomeres; aging; senescence; atherosclerosis; cancer; gene therapy; immunotherapy; regenerative medicine; personalized medicine

1. Telomeres and Telomerase in Aging and Cancer

2. Telomerase as a Target for Regenerative Medicine

3. Telomerase as a Target for Cancer Treatment

There are many advantages for using telomerase as an anti-cancer target. First, it is an essential and specific component for most cancer cells [129,138] and more widely expressed than any other tumor marker. Approximately 90% of all human cancers have elevated telomerase levels relative to normal cells. Second, telomerase is the most efficient mechanism for replicative immortality with only one (less robust) compensatory mechanism (ALT), which limits the risk for development of resistance to telomerase-based therapies. Third, the very low expression of telomerase in normal tissues, together with the longer telomeres in normal stem cells versus cancer cells, provides at least some degree of specificity with low risk of toxicity in normal cells [239], and limited risk in stem cells, provided that telomerase inhibition is limited in time.
There are also various pitfalls for a use of telomerase as a therapeutic target in cancer treatment. First, the anti-proliferative effects of telomerase inhibition are induced in cells with short telomeres only, which requires some time of tumor growth until the drug can be effective. Second, telomerase inhibition may elicit negative effects in highly proliferative cells which need telomerase for survival, namely, stem cells, etc. [240]. Despite shorter telomeres in cancer cells, these two points may restrict the therapeutic option for a narrow telomere length window. Moreover, it has been shown that stress induces a shift of telomerase from the nucleus to mitochondria, suggesting a telomere-independent physiological function and possible risks in long term inhibition of telomerase [16]. There are also caveats to the therapeutic strategy of senescence induction, per se. On one hand, both telomere-driven replicative senescence and stress-inducible senescence are tumor-suppressive [241,242,243,244,245,246,247]. On the other hand, senescence can be reversed by a process called crisis and then has pro-tumorigenic paracrine effects. By induction of telomere dysfunction and attrition chromosomal instability occurs and may result in activation of oncogenes and/or silencing of tumor suppressor genes, which may counteract the original therapeutic intention and cooperate to promote malignant transformation and drug resistance [248,249,250,251,252]. Finally, the currently available drugs and substances are often unspecific and have a wide variety of actions and different cellular targets that may counteract replicative immortality but may also exacerbate other cancer hallmarks such as chromosomal instability. Some studies are promising but also suggest that for complete eradication of all subpopulations of cancer cells a simultaneous targeting of several mechanisms will be needed. It is unlikely that a single target will provide lasting remission.
Approximately 5%–10% of cancer cells maintain their telomeres by ALT [28]. This process is only partially understood but may offer new therapeutic options by modulating the involved factors such as the shelterin complex or the telomere sequences themselves to induce telomere deprotection.
There are also a number of pitfalls in the treatment with telomerase-activating procedures or substances. Immortality is not intrinsically essential for malignancy [253]. However, an extended lifespan may accumulate rare genetic and epigenetic aberrations that can contribute to malignant transformation. Constitutive telomerase expression in mice increased tissue fitness and delay of aging at the expense of slightly increased cancer incidence [254,255,256]. In mice with cancer resistant backgrounds (by increased expression of tumor suppressors p16, Arf, and p53) transgenic telomerase expression extends lifespan by 43% [254]. Interestingly, the cancer-promoting activity in transgenic mouse models is not observed when telomerase is re-activated later in life.
In this context, a recently described methodological advance is of interest. Bernardes de Jesus et al. have designed a potential therapeutic approach in which telomerase is induced temporarily and selectively in old cells without promoting cancer growth. The special feature of recombinant adeno-associated virus (rAAV) vector is its ‘mild’ integration into the host genome. By use of rAAV vectors, which expressed the catalytic subunit of mouse telomerase (mTERT) it was integrated into the host genome at very low rates but, in mice, did not induce cancer growth. A possible explanation is the loss of the vector in rapidly proliferating cells such as cancer cells. Thus, this method might be used to treat age-related diseases, such as atherosclerosis or diabetes [257]. In short-lived organisms, such as mice, this strategy seems to be an excellent approach for a telomerase-based gene therapy. For long-lived organisms it is currently unknown if cancer can be promoted by rare integration events of constitutively-overexpressed hTERT [257].

The authors acknowledge the financial support of the Sonnenfeldstiftung (to Kathrin Jäger) and Katja Tränkner (WriteNow, Berlin, Germany) for preparing the drawings. 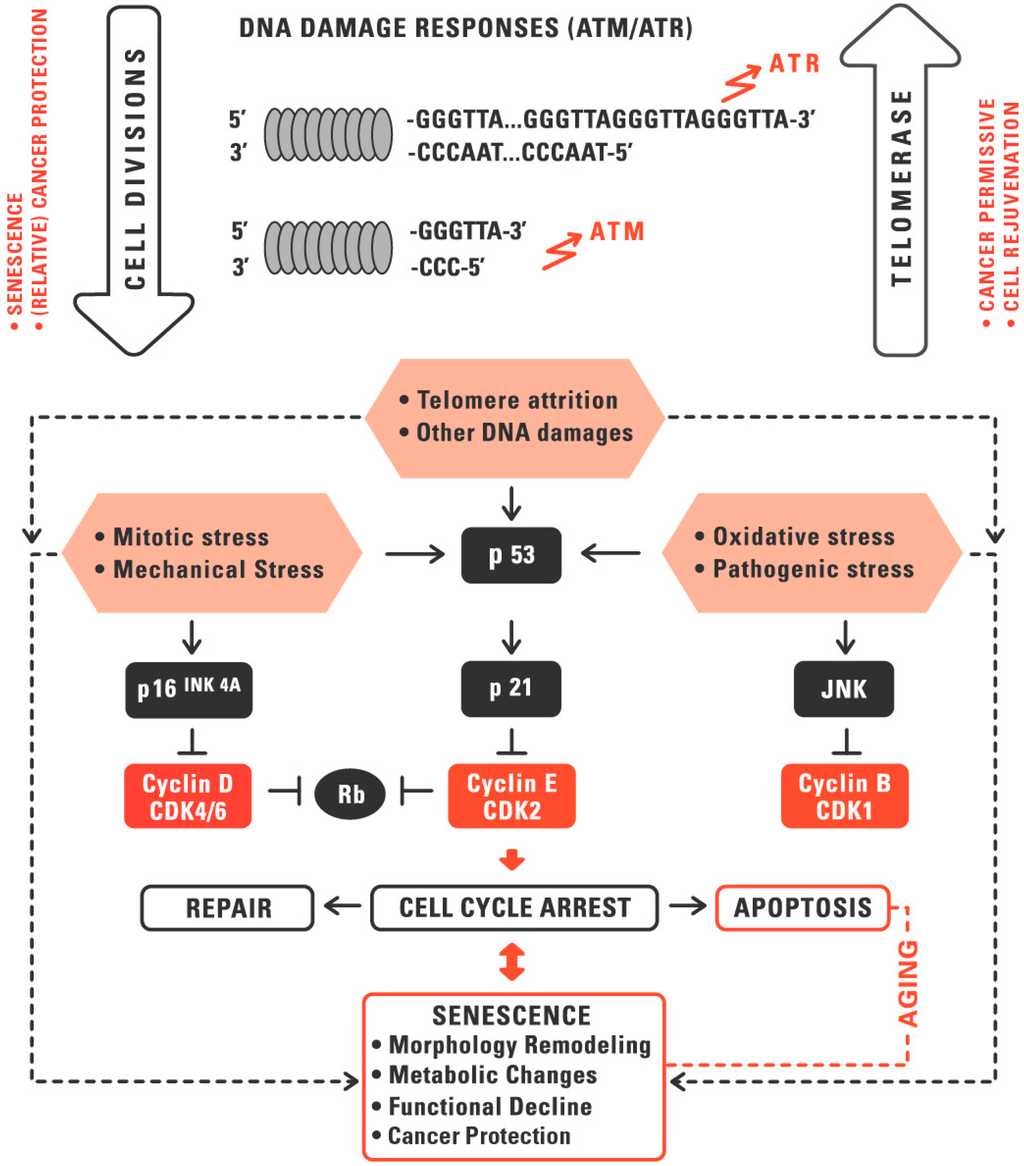 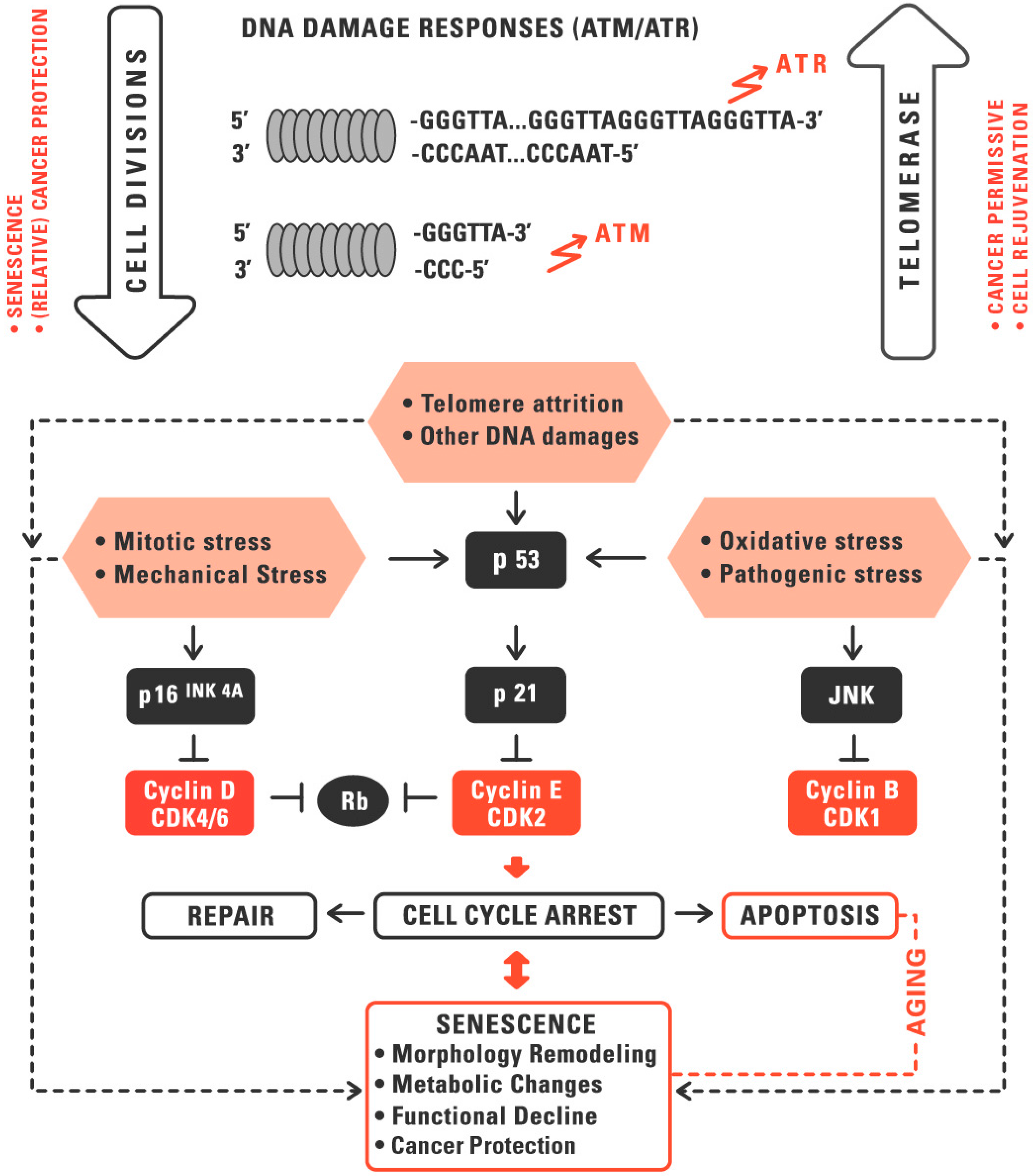 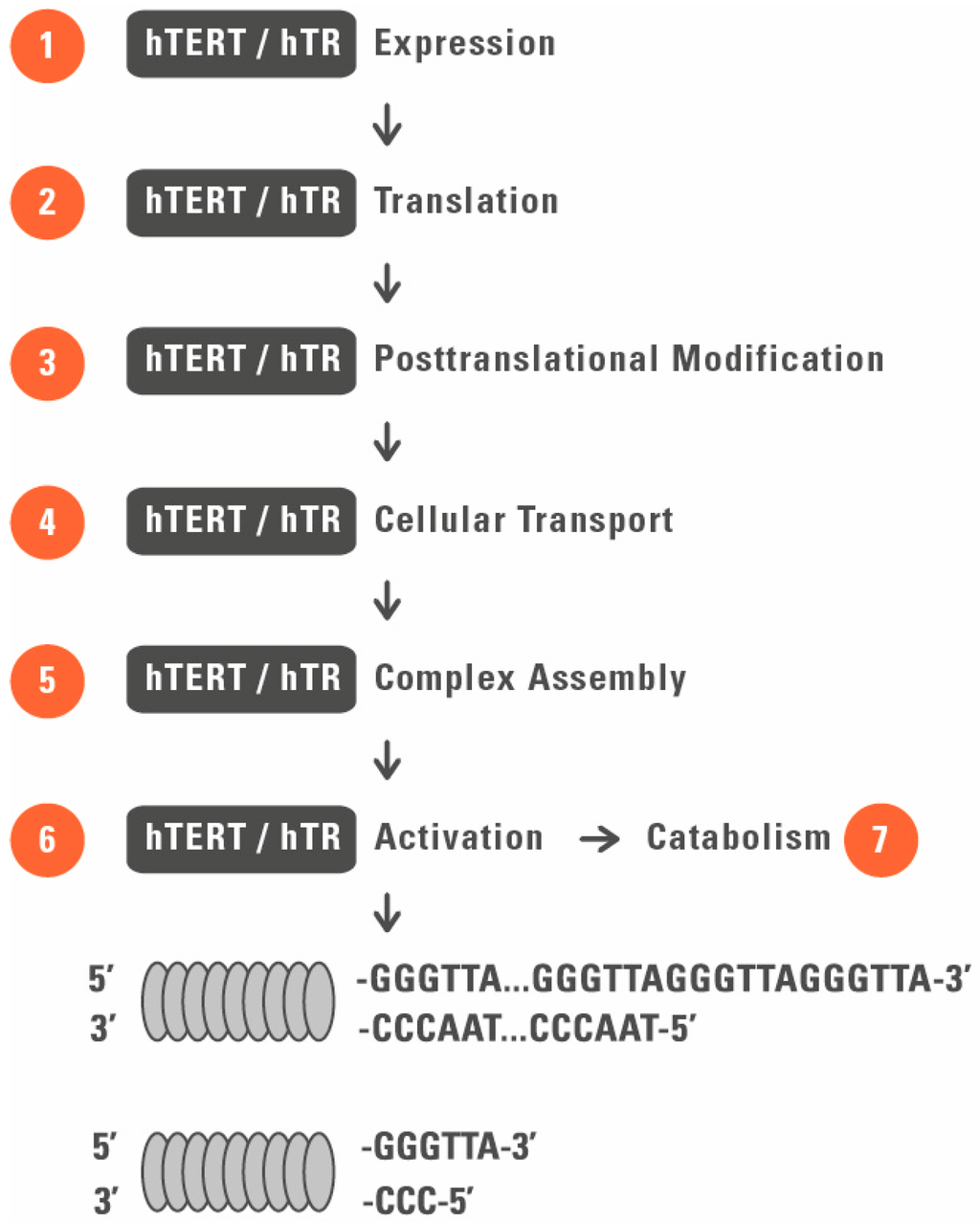 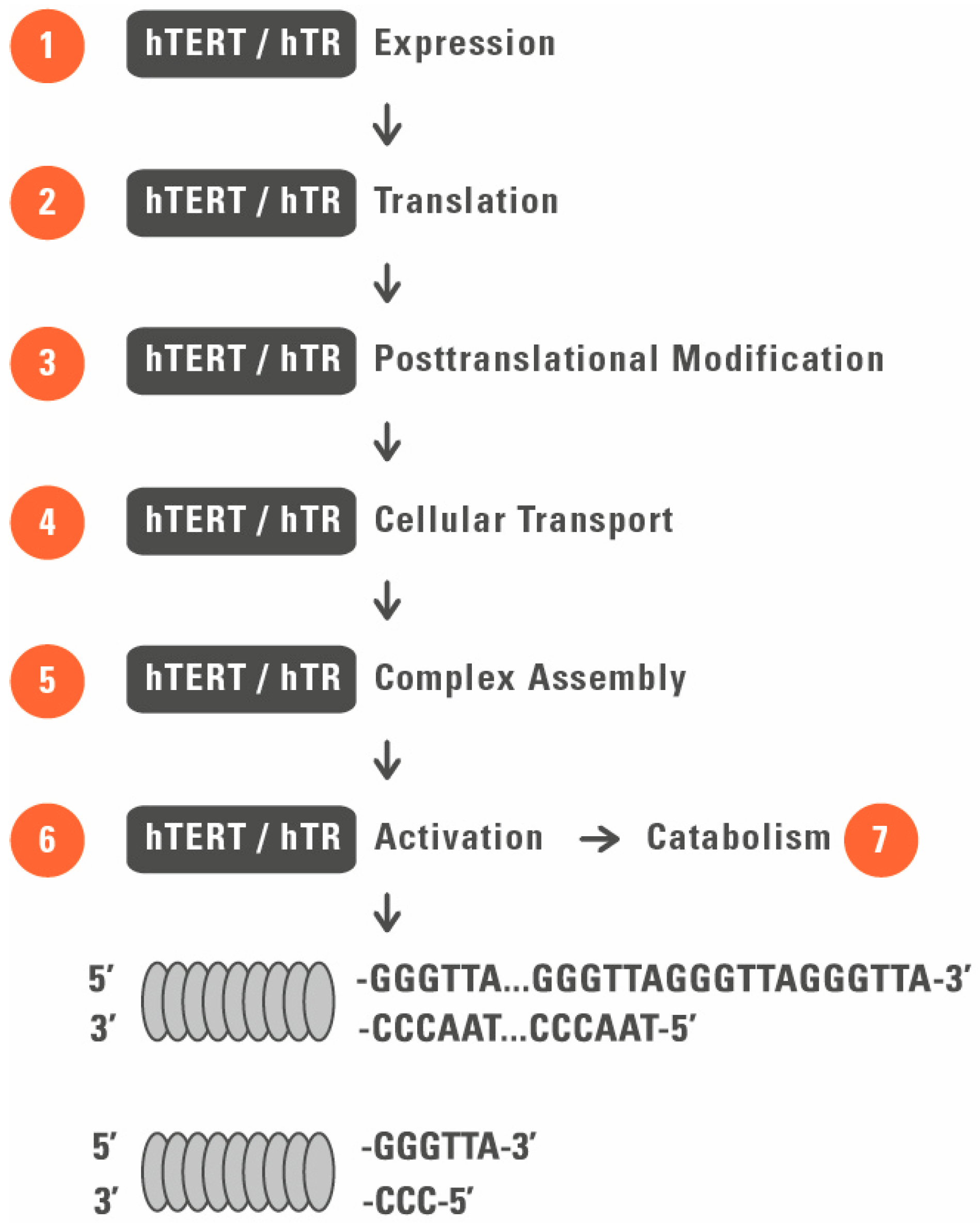