Telomerase Regulation from Beginning to the End

Hypohidrotic ectodermal dysplasia (HED) is characterized by abnormal development of the teeth, hair, and sweat glands. Ectodysplasin A (EDA), Ectodysplasin A receptor (EDAR), and EDAR-associated death domain (EDARADD) are candidate genes for HED, but the relationship between WNT10A and HED has not yet been validated. In this study, we included patients who presented at least two of the three ectodermal dysplasia features. The four genes were analyzed in seven HED patients by PCR and Sanger sequencing. Five EDA and one EDAR heterozygous mutations were identified in families 1–6. Two WNT10A heterozygous mutations were identified in family 7 as a compound heterozygote. c.662G>A (p.Gly221Asp) in EDA and c.354T>G (p.Tyr118*) in WNT10A are novel mutations. Bioinformatics analyses results confirmed the pathogenicity of the two novel mutations. In family 7, we also identified two single-nucleotide polymorphisms (SNPs) that were predicted to affect the splicing of EDAR. Analysis of the patient’s total RNA revealed normal splicing of EDAR. This ascertained that the compound heterozygous WNT10A mutations are the genetic defects that led to the onset of HED. Our data revealed the genetic basis of seven HED patients and expended the mutational spectrum. Interestingly, we confirmed WNT10A as a candidate gene of HED and we propose WNT10A to be tested in EDA-negative HED patients. View Full-Text
Keywords: hypohidrotic ectodermal dysplasia; EDA; EDAR; EDARADD; WNT10A hypohidrotic ectodermal dysplasia; EDA; EDAR; EDARADD; WNT10A
►▼ Show Figures 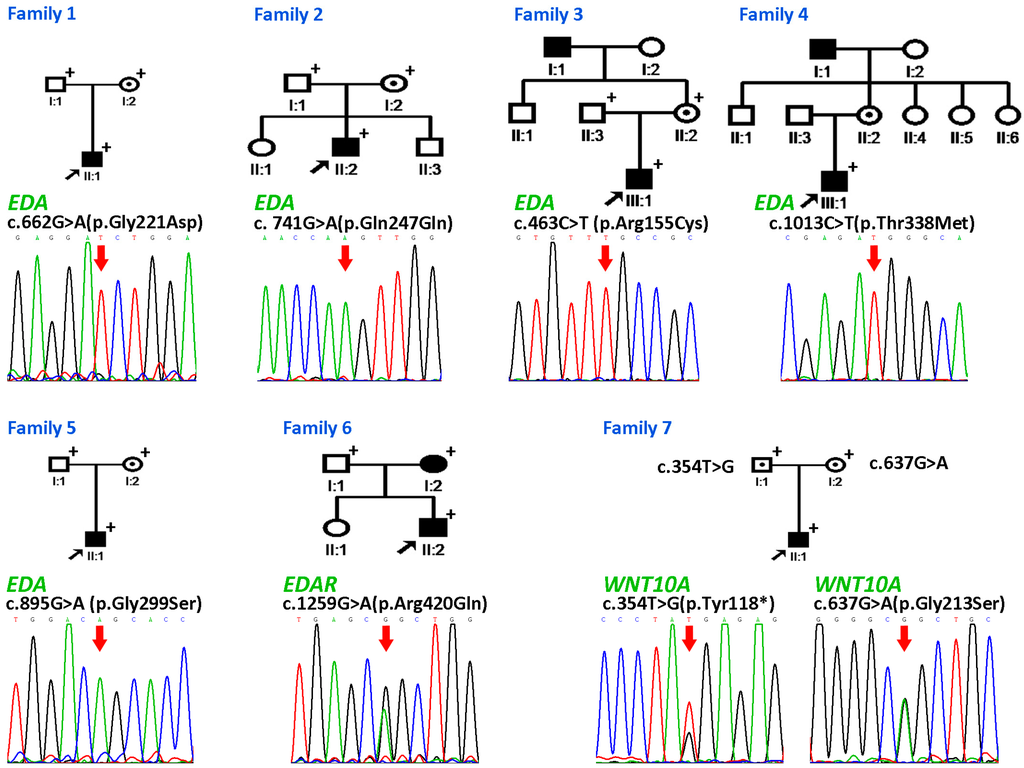