Atherosclerosis is a chronic multifactorial inflammatory disease with high worldwide prevalence, and has become the leading cause of death. In the present study, we analyzed global gene expression changes in the aorta of Apolipoprotein E (ApoE) null mice fed a high-fat diet by using RNA-seq. We identified a total of 280 differentially expressed genes, of which 163 genes were upregulated and 117 genes were downregulated by high-fat diet compared with normal diet. Functional clustering and gene network analysis revealed that fatty acid metabolic process is crucial for atherosclerosis. By examining of the promoter regions of differentially expressed genes, we identified four causal transcription factors. Additionally, through connectivity map (CMap) analysis, multiple compounds were identified to have anti-atherosclerotic effects due to their ability to reverse gene expression during atherosclerosis. Our study provides a valuable resource for in-depth understanding of the mechanism underlying atherosclerosis.
Keywords: ApoE null mice; RNA-seq; atherosclerosis ApoE null mice; RNA-seq; atherosclerosis

Atherosclerosis is a chronic multifactorial inflammatory disease with high prevalence worldwide and has become the leading cause of death [1]. The principal clinical manifestations of atherosclerosis are represented by coronary heart disease, cerebral stroke, and peripheral vascular disease. Atherosclerosis represents a heterogeneous group of pathological phenomena that include endothelium damage, inflammation, metabolic disorder, cell proliferation, foam cell formation, and soft inflamed atherosclerotic plaque rupture [2]. The molecular mechanisms underlying atherosclerosis remain unclear.
The mouse has been a powerful model in elucidating the genetic basis of atherogenesis. More than 80 genes have been confirmed to play a role in atherosclerosis by using gene-targeted mice [3]. Apolipoprotein E (ApoE) gene has a central role in lipoprotein metabolism, where it is required for the efficient clearance of chylomicrons and very-low-density lipoproteins. Notably, the ApoE null mouse was the first model showing severe and rapid development of atherosclerotic plaques without dietary intervention [4]. Using ApoE null mice fed with a high-fat diet, a previous study has determined the global gene expression profiles associated with arthrosclerosis using the microarray approach [5].
RNA-sequencing (RNA-seq), which utilizes the latest massively parallel sequencing, has provided an alternative way to obtain mRNA expression profile at unprecedented sensitivity and accuracy [6]. In contrast to the microarray, RNA-seq has several advantages. Firstly, it is an unbiased method which is not limited to detecting pre-designed sequences [6]. Secondly, it does not suffer from cross-hybridization since DNA sequences can be mapped to unique regions of the genome [7]. Lastly, it has no upper limit for quantification [8]. In the present study, we took advantage of the RNA-seq approach to investigate the global gene expression changes in the aorta of ApoE null mice fed a high-fat diet in comparison to normal diet. Our study contributes to an increase in the knowledge on molecular mechanisms underlying atherosclerosis.

ApoE-/-mice on the C57BL/6 background were obtained from Vital River Laboratory Animal Technology Corporation (Beijing, China). Regular chow and high-fat diet were purchased from Guangdong Medical Lab Animal Center (Foshan, Guangdong, China). Twenty four-week-old male mice were randomly divided into two groups. The normal diet group was fed with normal chow, while the treated group was fed with a high-fat diet containing 20% fat and 2.5% cholesterol. The mice were housed in a temperature-controlled room with 12 h light-dark cycles and free access to water and food. The treatment duration was eight weeks. At the end of the experiment, the aorta was separated with general microscope from the start of the ascending aorta to common iliac artery aortic bifurcation. The adventitia was intact. We selected three aorta samples from each group for RNA-seq analysis. Another three aorta samples from each group were prepared for further verification of RNA-seq results using quantitative real-time polymerase chain reaction (qRT-PCR). All these samples were selected randomly. All animal experiments were approved by the Animal Care and Utilization Committee of the Southern Medical University. The ethical code number is SYXX(Guangdong)2015-0056.

The total RNA was extracted with RNAiso Plus (TaKaRa Biotechnology, Dalian, China). Reverse transcription was performed at 37 °C for 15 min followed by 98 °C for 5 min using ReverTra Ace qPCR RT Kit (Toyobo, Osaka, Japan). Quantitative PCR was performed using THUNDERBIRD SYBR qPCR Mix (Toyobo, Osaka, Japan) on the Applied Biosystems 7500 (Life Technologies, Foster City, CA, USA). The program was as follows: 95 °C for 60 s, followed by 40 cycles of 95 °C for 15 s and 60 °C for 45 s. All reactions were run in triplicate. The β-actin gene was amplified as a reference gene for normalization. Data were analyzed using 2−ΔΔCt method. Primer sequences were listed in Table S1.

The gene network was generated by using the STRING database v10.0 [12]. The minimum combined score was set to 0.4 (the median confidence). The Cytoscape software version 3.4 (http://www.cytoscape.org) was applied for visualization and analysis of the gene network. The degree distribution was analyzed by using the Cytoscape plugin, Network Analyzer [13]. The degree threshold value for hub genes was the mean plus two standard deviations.

The putative promoter regions (1 kb upstream of transcription start site) were retrieved from the UCSC Genome Browser (http://genome.ucsc.edu/). The TESS software version 6.0 [14] was used to search for matches of position-weight matrices (PWM) available in the TRANSFAC database [15]. The cutoff value for relative score was set at 0.9. Using all genes in the genome as the background, a hypergeometric test with Benjamini–Hochberg multiple test correction was conducted using in-house PERL scripts. In the end, p-value < 0.01 was used as the significance threshold to identify enriched transcription factors.

The up- and downregulated genes were designated as the gene expression signature. These signature genes were submitted simultaneously for CMap query (build02; www.broadinstitute.org/cmap/). The enrichment score was calculated for each compound using the gene set enrichment analysis (GSEA) algorithm [16].

3.1. Identification of Gene Expression Changes in the Aorta of ApoE Null Mice Fed a High-Fat Diet

In this study, global gene expression profile of the aorta samples from ApoE null mice fed a high-fat diet was determined by RNA-seq. The aorta samples from ApoE null mice fed a normal chow diet served as control. We obtained a total of 20.8 million reads (single-end; 50 bp in length), 81.3% of which were uniquely mapped to the mouse genome. Mapped reads were used to estimate normalized transcription level as fragments per kilobase of transcript per million mapped fragments (FPKM). Using a fold change cutoff of 2 and an adjusted p-value cutoff of 0.05, we identified a total of 280 differentially expressed genes (Figure 1A). Among them, 163 genes were upregulated and 117 genes were downregulated in high-fat diet group compared to normal diet group (Table S2). The range of fold changes was shown in Figure 1B. To validate the RNA-seq data, a total of 16 genes with various fold changes were selected and quantified by quantitative RT-PCR (qRT-PCR). Although there was variation in fold changes between qRT-qPCR and RNA-seq, the expression patterns were coincident between these two techniques (Figure 1C).

To develop a thorough picture of differentially expressed genes at the systems level, gene network analysis was performed by using integrative gene–gene interaction data from the STRING database. The reconstructed gene network consisted of 159 genes and 348 gene–gene interactions (Figure 3A). Degree distribution analysis showed that the network followed a power-law distribution (Figure 3B) and therefore belonged to scale-free small world networks [17]. Small world networks have the particular feature that some nodes, known as hub genes, are highly connected compared with others. Using a defined threshold value, we identified seven hub genes (Figure 3C). These hub genes represent functionally important genes due to their key positions in the network and thus deserve further investigation.

This work was funded by the Presidential Foundation of the Nanfang Hospital of Southern Medical University, China (grant No. 2016C074 to D.X.). 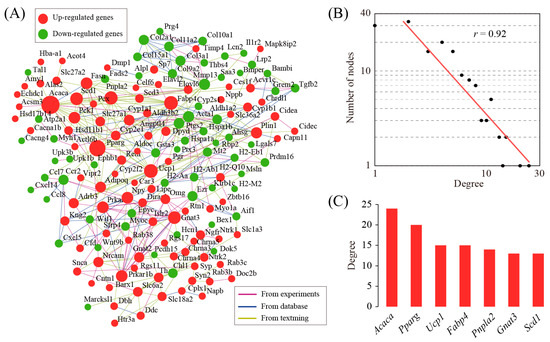 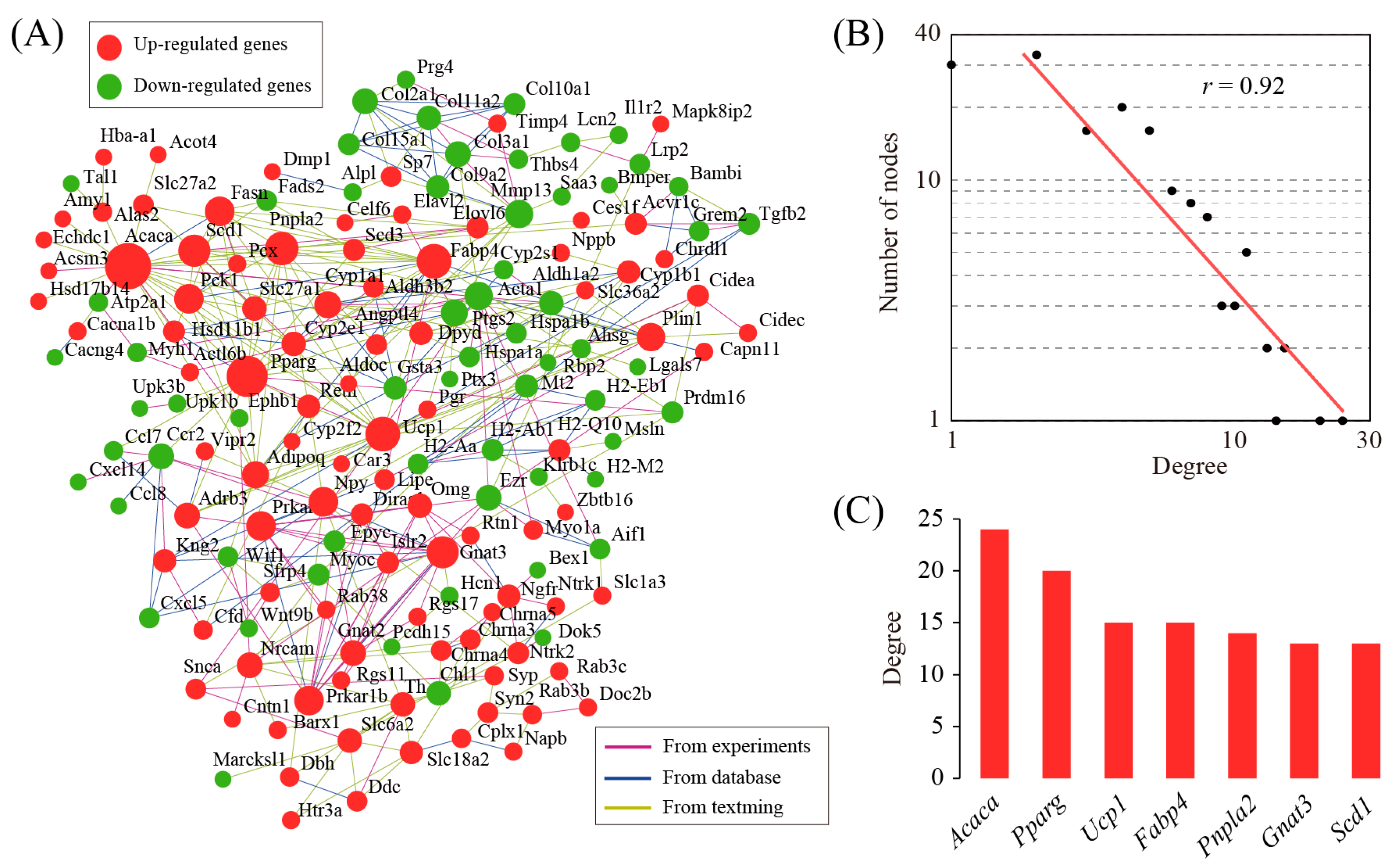 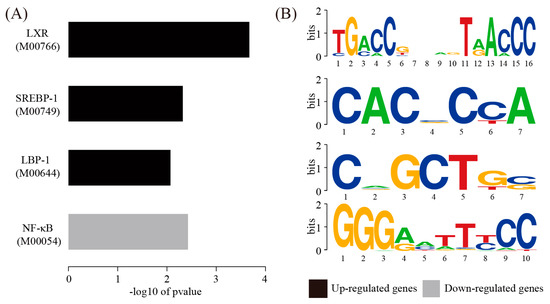 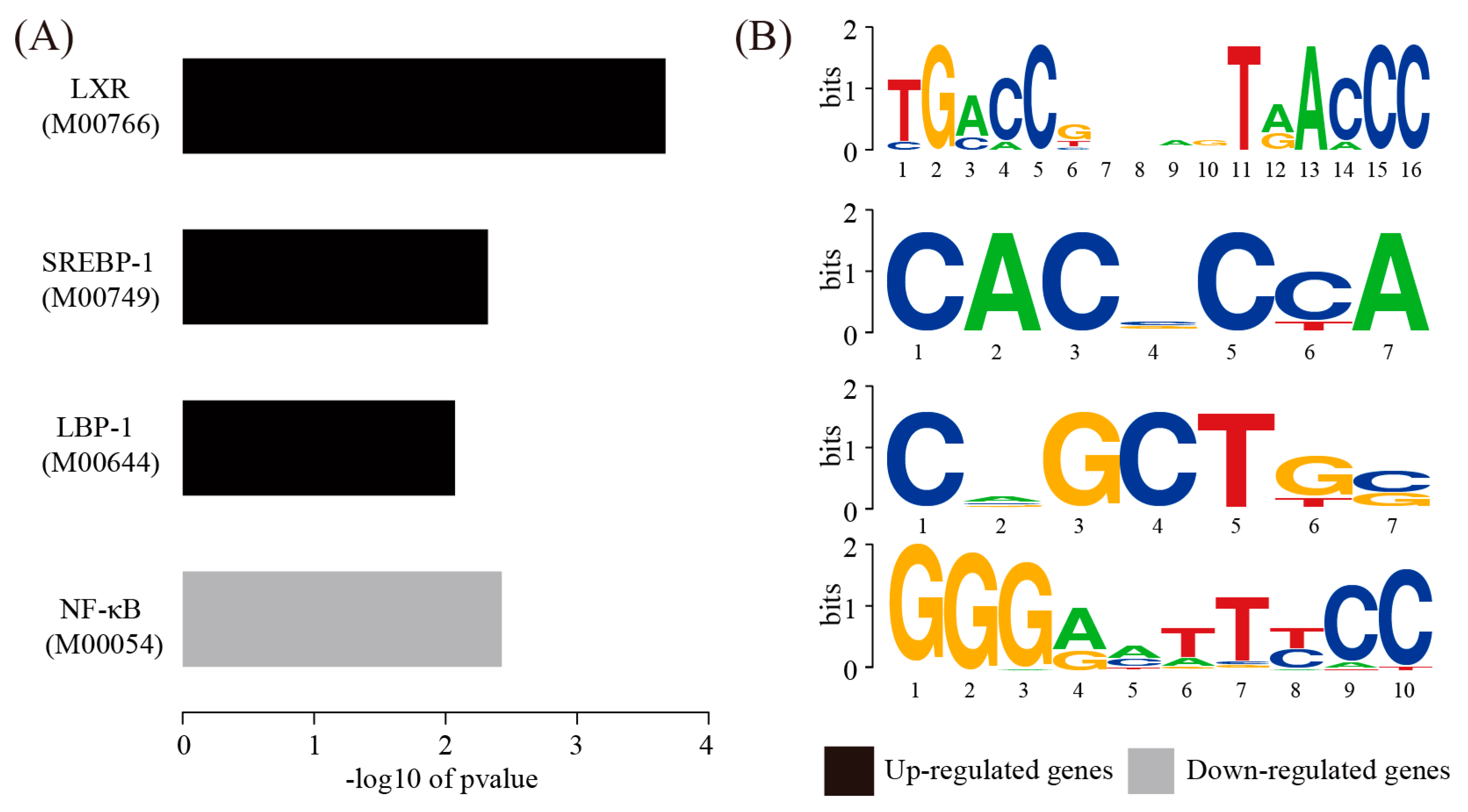