With the continuous evolution of plant species, the karyotypes of lineages are under evolutionary pressure and the chromosomes evolve through a combination of processes. Thus, the number, size, composition, structure, and shape of chromosomes differ among groups of plants, even those within a closely related taxa [3].
In accordance with the high plasticity of the nuclear genome sizes of plants [16], the size of linear metaphase chromosomes varies from less than 1 µm to more than a few tens of microns in the plant kingdom. The total size of metaphase chromosomes is generally determined by the genome size, that is, a large genome size indicates a huge total size of metaphase chromosomes [3]. The shape of monocentric chromosomes is determined by the position of the centromere, the presence of nucleolus organizing regions (NOR), and the position of NOR. The centromere, also called primary constriction, can subdivide a chromosome into “arms”, whereas the arm ratio may vary based on the position of the centromere. NOR generates a secondary constriction and a distal “satellite” in a given chromosome. The number of chromosomes can also display significant diversity, with somatic chromosome numbers from four (n = 2) in Haplopappus gracilis [17] to approximately 1440 (n = 720) in the fern Ophioglossum reticulatum [18].
The main factors that influence plant chromosome evolution are chromosome rearrangement and polyploidy [19,20,21,22]. The breakage and subsequent ligation of chromosomal segments can lead to rearrangements of the chromosome structure, such as inversions, translocations, centric split and fusion, duplications, and deletions. Chromosome rearrangement can not only promote the evolution of chromosome size, structure and shape, and composition, but also induce the chromosome number alteration [20]. Polyploidy and the subsequent return to diploidy is another important mechanism involved in chromosome evolution in plants [23]. Polyploidization can cause a dramatic increase in the chromosome number. The following diploidization undergoes complex processes, including various chromosome rearrangements, leading to chromosome evolution [21]. In fact, most of the plant species are paleopolyploidys [21].

3. Characteristics and Distribution Patterns of Repetitive Sequences in Plant Chromosomes

4.1. Repetitive Sequences and Evolution of Chromosome Size and DNA Composition

4.2. Repetitive Sequences and Evolution of Chromosome Structure and Shape

Although TEs and other repetitive sequences are extensively distributed in plant genomes and play essential roles in chromosome evolution, the majority of the TEs are dormant or inactivated, and only a tiny fraction of TEs are transpositionly active [95]. This is mainly achieved by epigenetic silencing evolved to control the proliferation of TEs and eliminate their perceived damage effect [69]. Epigenetic modification, including DNA methylation, histone modification, and small RNA pathway regulation, represents a sophisticated mechanism used to ameliorate the deleterious effects of TEs and other types of intrusive DNA, such as transgenes [13,96,97]. TEs and the derived repetitive DNA sequences are preferred targets of the epigenetic modification [98,99]. The hypomethylation level induced by a demethylation reagent could cause the activation and transposition of TEs in a fungus [100]. Epigenetic modification affects most aspects of plant growth, development, and reproduction processes [101,102,103]. We hypothesize that the epigenetic modification, intertwined with TEs, also plays important roles in chromosome evolution in plants.

Eukaryotic genomes often contain two distinct parts, heterochromatin and euchromatin. Heterochromatin is normally concentrated in the centromeric, pericentromeric, and telomeric regions, NORs, and some distinct knobs [104,105]. In contrast to euchromatin, heterochromatin is generally characterized by repetitive sequence accumulation, post-translational histone modifications, and epigenetic gene silencing [104,106]. In A. thaliana, DNA methyl transferase, H3K9 histone methylase, and histone deacetylase (H4K16) are involved in heterochromatin assembly [107,108].
Heterochromatin is essential for normal chromosome organization, centromere function, and telomere protection [109,110,111]. The epigenetic modification is frequently involved in the condensed heterochromatic regions [112]. Such epigenetic silencing through the formation of heterochromatin, which involves DNA and histone methylation and RNA interference (RNAi) pathways, has been shown for preventing the proliferation of TEs and suppressing the unfavorable transcription of genes [113,114]. It has been revealed that the mRNAs produced by TEs were degraded by the RNAi pathway, and the TE activity was thereby reduced [115]. In addition, the RNAi pathway induces the transcriptional silencing of TEs by recruiting chromatin-modifying elements to transposable element loci for modification of the targeted region of chromatin. Modifications in the targeted TE region, combined with other complex processes, including histone modifications and other unknown mechanisms, may cause heterochromatin formation [13,116]. In Arabidopsis, small interfering RNAs correspond to TEs, and related repeated sequences can guide the chromatin remodelling of ATPase DDM1 (Decrease in DNA Methylation 1) for heterochromatin formation [96,108]. Furthermore, the heterochromatin may recruit many chromatin-modifying elements, such as histone methylatransferase, DNA methyltransferase, and other chromatin-modifying elements, thereby causing the expansion of heterochromatin to the adjacent regions [13]. For example, TE-triggered DNA methylation and H3K9me2 can spread to the nearby regions, thereby influencing the chromatin state of nearby sequences in maize [117,118].

Epigenetic modification is essential for centromere function. Centromeres are specialized chromosomal structures that are important for spindle attachment and chromosome separation, which have now been shown to incorporate various classes of repetitive sequences that are embedded in heterochromatic regions [119]. Despite the evolutionarily conserved function, centromeric DNA sequences are dramatically variable, even among closely related species [120,121]. It is suggested that centromere function is independent of its underlying DNA sequences but governed by epigenetic mechanisms, which is still poorly understood [122,123]. DNA methylation and histone modifications are potential epigenetic marks for centromere identity and function [124].
The functional centromere can be inactivated easily, and the inactivation is associated with epigenetic change [125]. For example, the DNA sequences in the normal B chromosome centromere exhibit hypomethylation, whereas the inactivation of this centromere is accompanied by an increased methylation level [126]. In wheat, a chromosome was reported to have three centromeres, one large and two small. The small centromeres were always inactivated, and the inactivation was also associated with enhanced H3K27me2 (dimethylation of lysine 27 on histone H3) and H3K27me3 (trimethylation of lysine 27 on histone H3) in the related pericentromeric chromatin [123]. Furthermore, if normal centromeres are lost or inactivated, regions without centromeric repeats can recruit CENH3 (centromere histone H3), a conventional histone H3 in plants, and other centromere-associated proteins to assemble a new functional centromere [127,128]. In maize, a new functional centromere could be formed after the loss of centromeric sequences and gain of ectopic sequences, which suggested that functional centromeres may be formed without the known centromere-specific sequences. However, the maintenance of a high DNA methylation level appears to be crucial for the proper function of a new centromere [128]. In maize inbreds, the establishment of neocentromeres at novel sites was accompanied by centromeric repeat (centC) deletions at the old centromere and new repetitive sequence accumulation, which can recruit sequence-specific binding proteins that are favorable for establishing the necessary epigenetic environment of the novel [129].

Under normal conditions, the majority of TEs and the derived repetitive sequences are dormant and inactive, mainly due to the epigenetic modification status. However, when the genome homeostasis is disturbed, such as biotic and abiotic stresses, hybridization, tissue culture, and polyploidy, the TEs can be released from suppression and thereby become activated [130,131,132]. Such reactivation is caused by the alteration of epigenetic modification and can result in considerable effects on the genome and chromosome structures. The interspecific hybrids of Macropus eugenii and Wallabia bicolor have clearly longer centromeres, which are caused by undermethylation-associated retroelement amplification in the centromere regions [133]. The DNA methylation level was lower in the hybrids of Chrysanthemum morifolium and Leucanthemum paludosum than in the parental lines [134]. In Helianthus, inter-species hybrids have dramatically larger genomes [135] and chromosomal rearrangements [136], and such alteration is associated with TE reactivation and amplification [137,138]. These results indicate that the suppression of DNA methylation and subsequent TE reactivity in hybrids could facilitate rapid karyotypic evolution. It is surprising that an Ogre family is nearly absent on the Y chromosome but is ubiquitous in the genome of S. latifolia. Further combined analysis suggested that 24-nucleotide small RNA might drive the CHH methylation of Ogre LTRs, and such small RNA-mediated silencing might cause the absence of the Ogre family on the Y chromosome [139]. In synthetic and natural allopolyploids, the genomes frequently underwent rapid epigenetic changes, including alteration in cytosine methylation manners, the relaxation of imprinting genes, the silencing and activation of homologous genes, and the reactivation of dormant TEs [140]. These epigenetic changes are inter-related and may promote gene diversification, contribute to genetic and cytological diploidization, and facilitate intergenomic coordination, thus bearing direct relevance to polyploidy evolution, adaptation, and speciation [140,141].

The following are available online at www.mdpi.com/2073-4425/8/10/290/s1. Table S1: Information on genome size, gene numbers, proportion, and quantities of different types of repetitive sequences in plants. All the sequenced plant genomes were collected, whereas only species with complete information about genes and repetitive sequences were displayed.

This study was financially supported by grants from the National Natural Science Foundation of China (31470334 and 31300202), Program for Innovative Research Team (in Science and Technology) in University of Henan Province (17IRTSTHN017), the Foundation for Young Teachers in Colleges and Universities of Henan Province (2016GGJS-051), and The National Key Research and Development Program of China (2016YFD0300203-3).

S.-F.L. and W.-J.G. designed the outline of the article. S.-F.L. wrote the first draft. T.S. and W.-J.G. prepared the tables. G.-Q.C. and X.L. performed the FISH experiment. All authors were involved in the revision of the draft manuscript and have agreed to the final content. 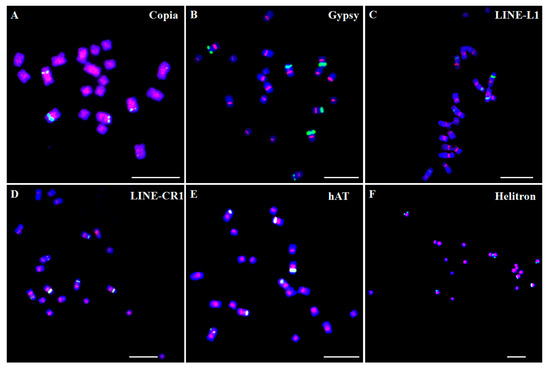 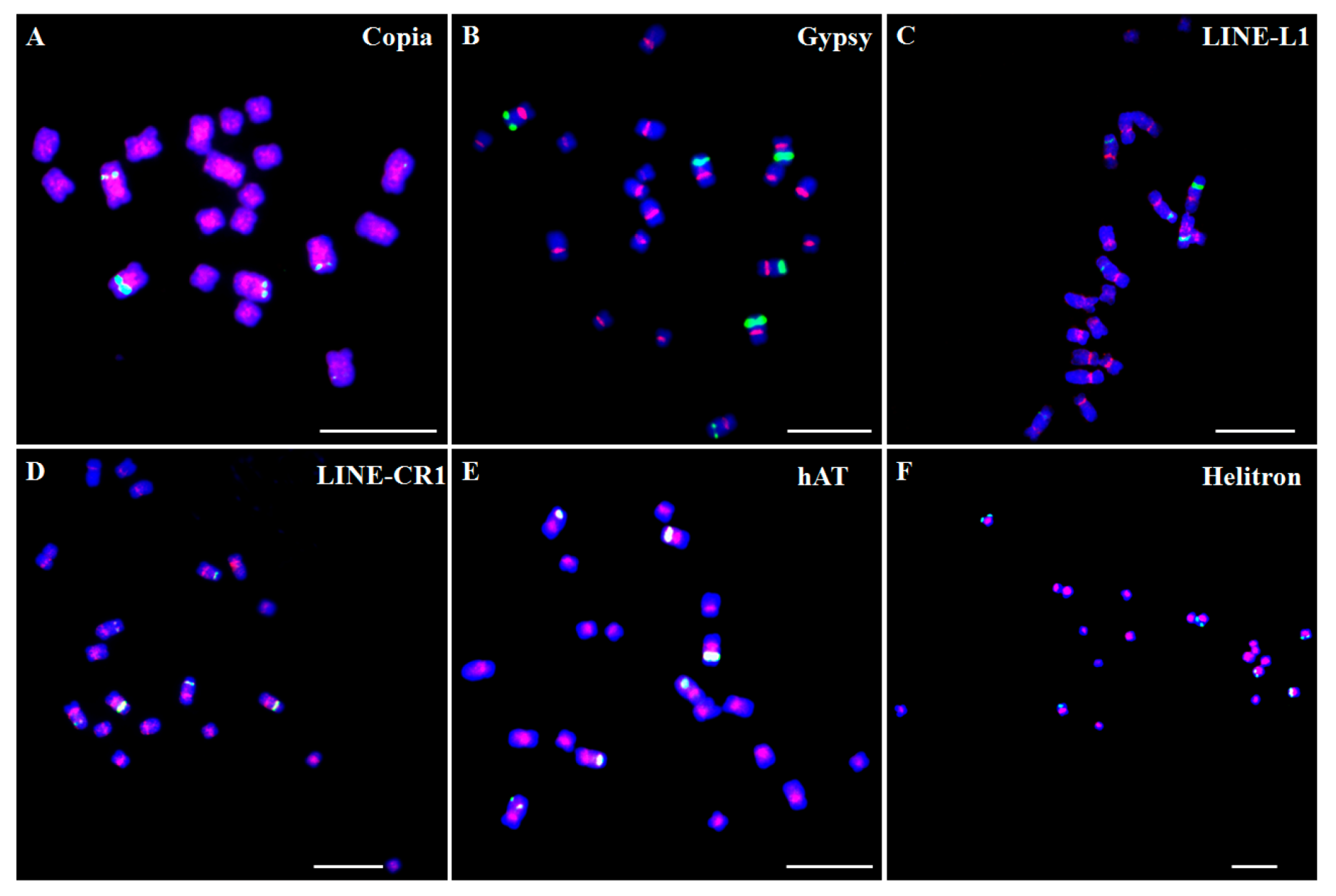 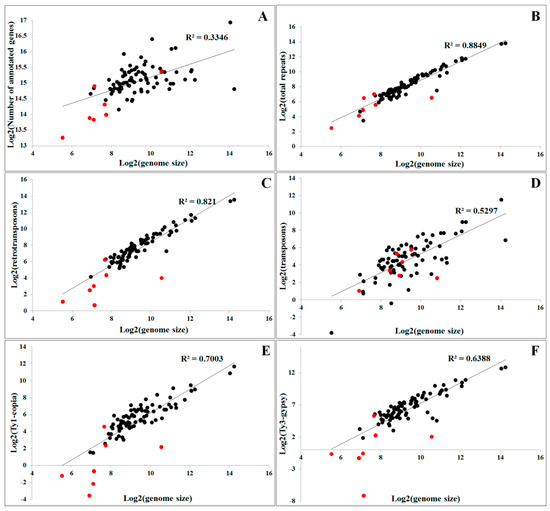 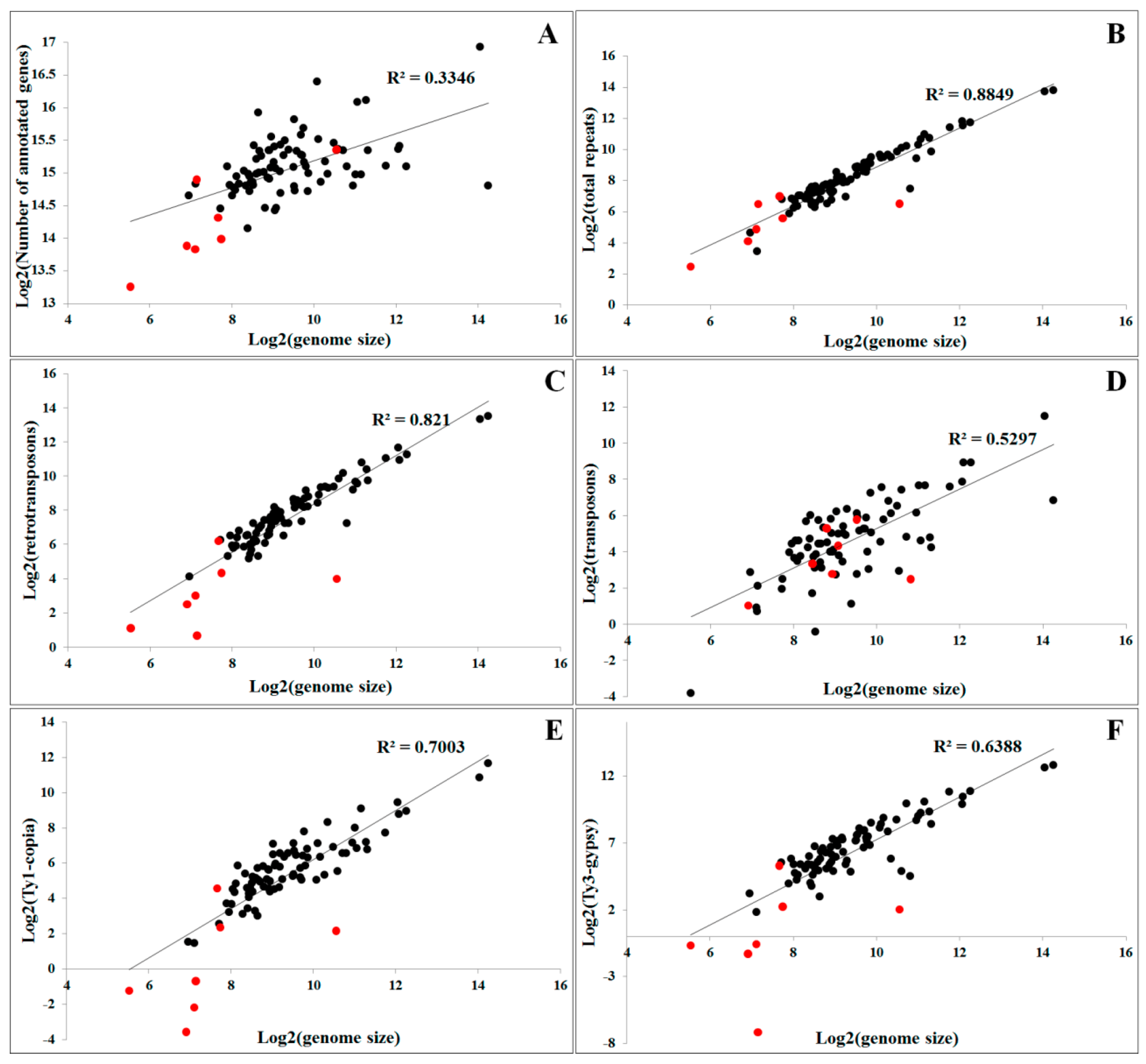 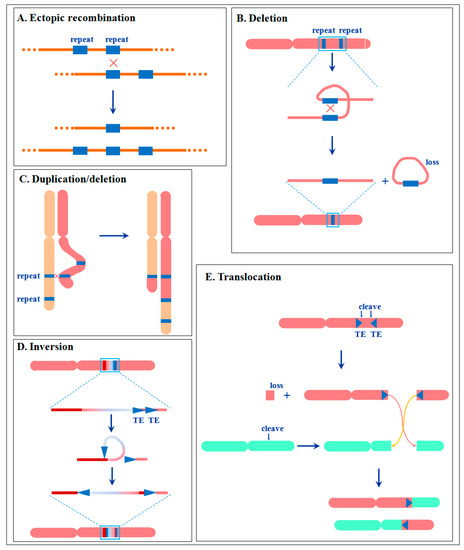 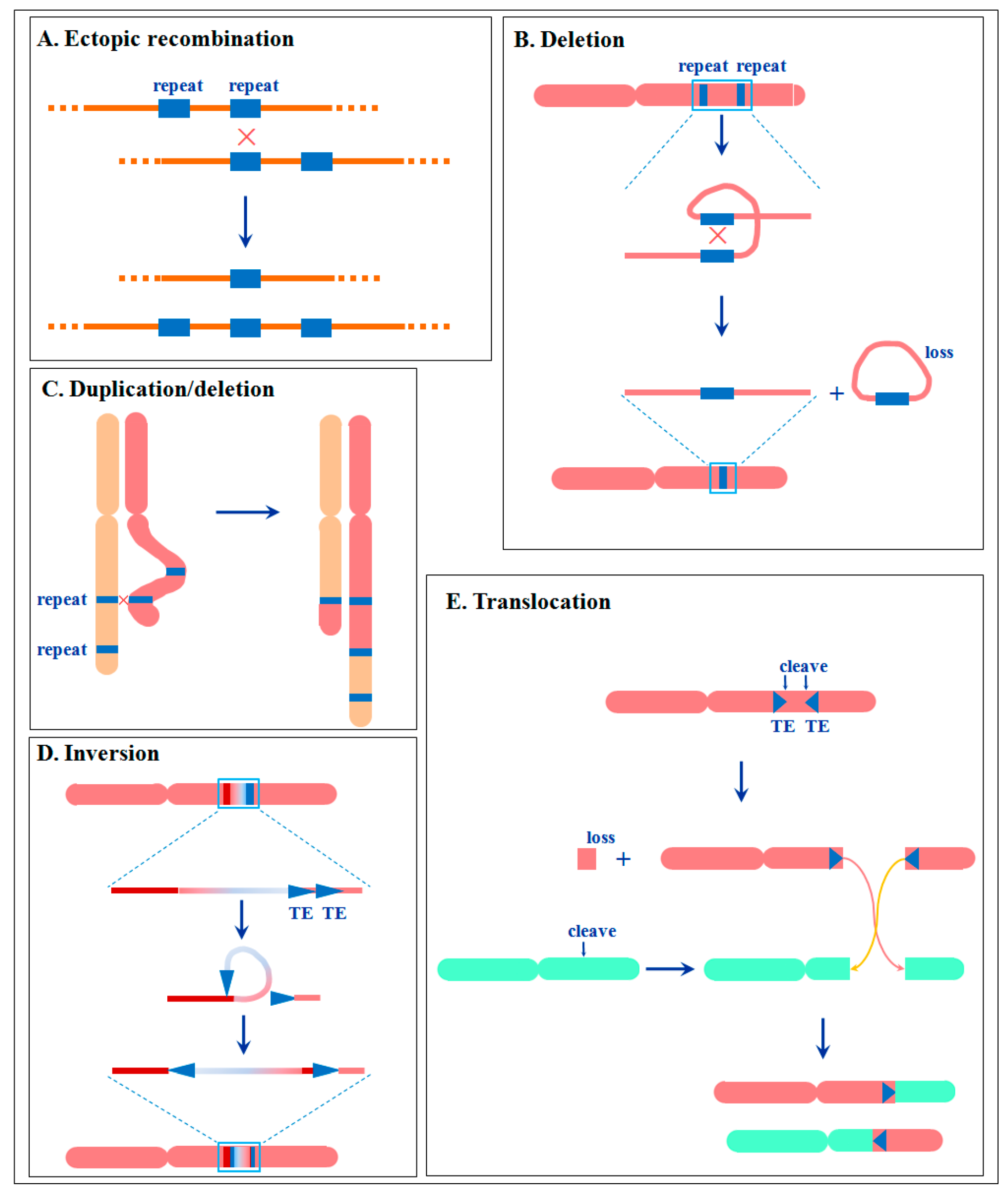