This study performs a systematic analysis of the recent and future changes of dry spells (DS) in Croatia. DS are defined as consecutive sequences of days with daily precipitation less than 5 mm of the precipitation-per-day threshold (DS5). Daily precipitation data come from a dense national rain gauge network (covering seven regions) and span the period 1961–2015. The spatial and temporal changes of the observed mean (MDS5) and maximum (MxDS5) seasonal and annual dry spells were analysed by means of the Kendall tau method and the partial trend method. Future changes of DS5 were assessed by employing the three regional climate models (RegCM4, CCLM4 and RCA4) covering the EURO-CORDEX domain with a 12.5-km horizontal resolution, resulting in a realistic orography and land–sea border over Croatia. The models were forced at their boundaries by the four CMIP5 global climate models. For the reference period 1971–2000, the observed, as well as modelled, DS5 were analysed, and the systematic model errors were assessed. Finally, the projections and future changes of the DS5 statistics based on simulations under the high and medium greenhouse gases concentration scenarios (i.e., RCP8.5 and RCP4.5) with a focus on the climate change signal between 1971–2000 and two future periods, 2011–2040 and 2041–2070, were examined. A prevailing increasing trend of MDS5 was found in the warm part of the year, being significant in the mountainous littoral and North Adriatic coastal region. An increasing trend of MxDS5 was also found in the warm part of the year (both the spring and summer), and it was particularly pronounced along the Adriatic coast, while a coherent negative trend pattern was found in the autumn. By applying the partial trend methodology, an increase was found in the very long DS5 (above the 90th percentile) in the recent half of the analysed 55-year period in all seasons, except in the autumn when shortening in the DS5 was detected. The climate change signal during the two analysed future periods was positive for the summer in all regions, weakly negative for the winter and not conclusive for the spring, autumn and year. It was found that no RCM-GCM combination is the best in all cases, since the most successful model combinations depend on the season and location. View Full-Text
Keywords: dry spells; trends; climate change; climate models; Croatia; EURO-CORDEX dry spells; trends; climate change; climate models; Croatia; EURO-CORDEX
►▼ Show Figures 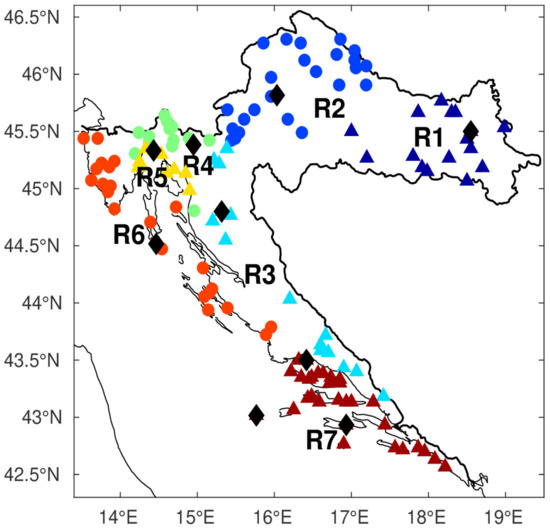