Species Richness and Taxonomic Distinctness of Zooplankton in Ponds and Small Lakes from Albania and North Macedonia: The Role of Bioclimatic Factors
Previous Article in Journal

The mesozooplankton composition and dynamics in coastal lagoons of Maryland, mid-Atlantic region, USA have received little scientific attention despite the fact that the lagoons have undergone changes in water quality in the past two decades. We compared mesozooplankton abundance and community structure among sites and seasons, and between 2012, a year of higher than average salinity (33.4), and 2013 with lower than average salinity (26.6). It was observed that the composition, diversity, and abundance of mesozooplankton in 2012 differed from those of 2013. Barnacle nauplii were abundant in 2012 contributing 31% of the non-copepod mesozooplankton abundance, whereas hydromedusae were more dominant in 2013 and contributed up to 83% of non-copepod zooplankton abundance. Gastropod veliger larvae were more abundant in 2013 than in 2012 while larvae of bivalves, polychaetes, and decapods, in addition to cladocerans and ostracods had higher abundances in 2012. The abundance and diversity of mesozooplankton were explained by variations in environmental factors particularly salinity, and by the abundance of predators such as bay anchovy (Anchoa mitchelli). Diversity was higher in spring and summer 2012 (dry year) than in 2013 (wet year). The reduction of salinity in fall 2012, due to high freshwater discharge associated with Hurricane Sandy, was accompanied by a decrease in mesozooplankton diversity. Spatially, diversity was higher at sites with high salinity near the Ocean City Inlet than at sites near the mouth of tributaries with lower salinity, higher nutrient levels and higher phytoplankton biomass. Perhaps, the relatively low salinity and high temperature in 2013 resulted in an increase in the abundance of hydromedusae, which through predation contributed to the reduction in the abundance of bivalve larvae and other taxa. View Full-Text
Keywords: Mesozooplankton; salinity; abundance; distribution; diversity; Maryland Coastal Bays Mesozooplankton; salinity; abundance; distribution; diversity; Maryland Coastal Bays
►▼ Show Figures 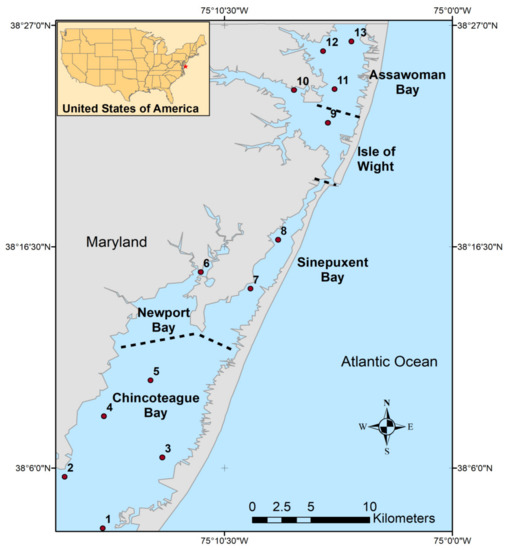