Long-Term Changes in the Zooplankton Community of Lake Maggiore in Response to Multiple Stressors: A Functional Principal Components Analysis
Previous Article in Journal

Response of Cladocera Fauna to Heavy Metal Pollution, Based on Sediments from Subsidence Ponds Downstream of a Mine Discharge (S. Poland)

Mining is recognized to deeply influence invertebrate assemblages in aquatic systems, but different invertebrates respond in different ways to mining cessation. Here, we document the response of the cladoceran assemblage of the Chechło river, S. Poland (southern Poland) to the cessation of Pb-Zn ore mining. The aquatic system includes the river and associated subsidence ponds in the valley. Some ponds were contaminated during the period of mining, which ceased in 2009, while one of the ponds only appeared after mining had stopped. We used Cladocera to reveal how the cessation of mine water discharge reflected on the structure and density of organisms. A total of 20 Cladocera taxa were identified in the sediment of subsidence ponds. Their density ranged from 0 to 109 ind./1 cm3. The concentrations of Zn, Cd, Cu and Pb were much higher in sediments of the ponds formed during peak mining than in the ponds formed after the closure of the mine. Statistical analysis (CCA) showed that Alonella nana, Alona affinis, Alona sp. and Pleuroxus sp. strongly correlated with pond age and did not tolerate high concentrations of heavy metals (Cu and Cd). This analysis indicated that the rate of water exchange by the river flow and the presence of aquatic plants, affect species composition more than pond age itself. View Full-Text
Keywords: Zn-Pb maine; subfossil; Cladocera; heavy metals; CCA analyses; anthropogenic impact Zn-Pb maine; subfossil; Cladocera; heavy metals; CCA analyses; anthropogenic impact
►▼ Show Figures 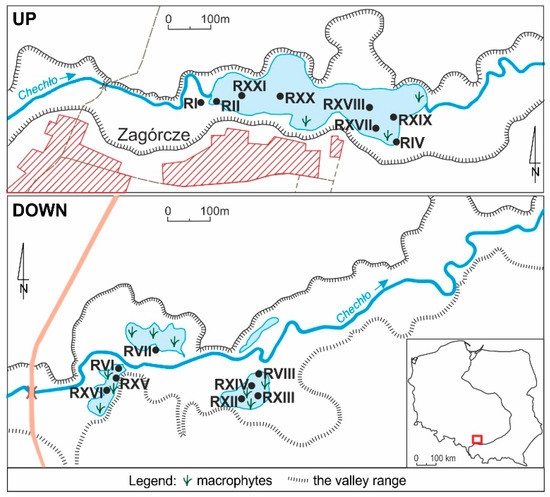