Distribution and Risk Assessment of Toxic Pollutants in Surface Water of the Lower Yellow River, China

The lower reaches of the Yellow River is known for the rapid development of industry and agriculture, which has also led to some pollution. However, information about the level of toxic contaminants in the surface waters is lacking in this area. Therefore, five sampling points were set in the lower Yellow River to investigate the distribution of various pollutants and analyze the potential risks. The presence of heavy metals (Heavy metals tested for in this study were: Mercury (Hg), Arsenic (As), Copper (Cu), Chromium (Cr), and Zinc (Zn)) and antibiotics (Antibiotics tested for in this study were: Enrofloxacin (ENR), Ciprofloxacin (CIP), and Norfloxacin (NOR)) in water samples taken from the lower Yellow River were measured to reveal the spatial distribution and risk potential of the compounds. Various water quality parameters (Water quality parameters used in this study were: chemical oxygen demand (COD), biological oxygen demand (BOD5), total phosphorus (TP), and total nitrogen (TN)) were also tested. Study results showed the main surface water pollution components were COD, BOD5, TN, and TP. The average levels were 37.79 mg/L, 16.64 mg/L, 4.14 mg/L, and 0.42 mg/L, respectively. Among the detected metals from the water samples, Hg (LOD-0.1 μg/L) levels were only in line with the surface water class III or worse. Both fish and water samples contained antibiotics. According to an ecological risk assessment conducted along the river, the distribution of pollutants in the waters exhibited a spatial relationship with the land-use pattern in the study region and the Kenli site was the most polluted. Research shows that up-to-date data on the residual levels and distribution characteristics of pollutants in the lower Yellow River could provide valuable baseline data and technical support for relevant government departments and their management going forward. View Full-Text
Keywords: lower Yellow River; ecological health; heavy metals; antibiotics; potential risk assessment lower Yellow River; ecological health; heavy metals; antibiotics; potential risk assessment
►▼ Show Figures 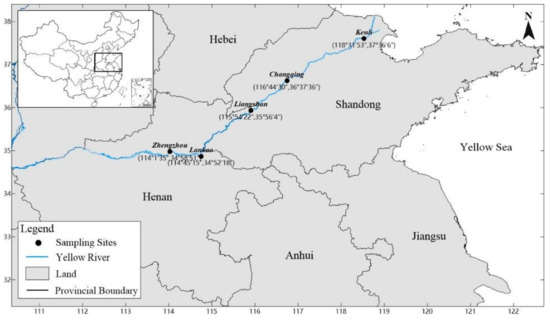