Flood Hazard Mapping of a Rapidly Urbanizing City in the Foothills (Birendranagar, Surkhet) of Nepal

Physical and Anthropogenic Factors Related to Landslide Activity in the Northern Peloponnese, Greece

The geological, geomorphic conditions of a mountainous environment along with precipitation and human activities influence landslide occurrences. In many cases, their relation to landslide events is not well defined. The scope of the present study is to identify the influence of physical and anthropogenic factors in landslide activity. The study area is a mountainous part of the northern Peloponnesus in southern Greece. The existing landslides, lithology, slope angle, rainfall, two types of road network (highway-provincial roads and rural roads) along with land use of the study area are taken into consideration. Each physical and anthropogenic factor is further divided into sub-categories. Statistical analysis of landslide frequency and density, as well as frequency and density ratios, are applied and combined with a geographic information system (GIS) to evaluate the collected data and determine the relationship between physical and anthropogenic factors and landslide activity. The results prove that Plio-Pleistocene fine-grained sediments and flysch, relatively steep slopes (15°–30°) and a rise in the amount of rainfall increase landslide frequency and density. Additionally, Plio-Pleistocene fine-grained sediments and flysch, as well as schist chert formations, moderate (5°–15°) and relatively steep slopes (15°–30°), along with the amount of rainfall of >700 mm are strongly associated with landslide occurrences. The frequency and magnitude of landslides increase in close proximity to roads. Their maximum values are observed within the 50 m buffer zone. This corresponds to a 100 m wide zone along with any type of road corridors, increasing landslide occurrences. In addition, a buffer zone of 75 m or 150 m wide zone along highway and provincial roads, as well as a buffer zone of 100 m or 200 m wide zones along rural roads, are strongly correlated with landslide events. The extensive cultivated land of the study area is strongly related to landslide activity. By contrast, urban areas are poorly related to landslides, because most of them are located in the northern coastal part of the study area where landslides are limited. The results provide information on physical and anthropogenic factors characterizing landslide events in the study area. The applied methodology rapidly estimates areas prone to landslides and it may be utilized for landslide hazard assessment mapping as well as for new and existing land use planning projects. View Full-Text
Keywords: landslides; geographic information system (GIS); frequency ratio; density ratio; human activities; land use planning landslides; geographic information system (GIS); frequency ratio; density ratio; human activities; land use planning
►▼ Show Figures 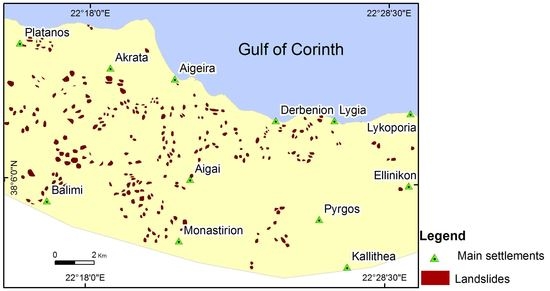