Submit to Symmetry Review for Symmetry 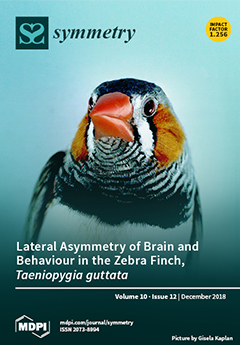 Cover Story (view full-size image): Zebra finches show well-defined asymmetry of brain specialisation: for food search using the right eye, but for viewing a predator, it is a left eye fixation and for neutral stimuli no eye preference. View Paper here.
Previous Issue
Volume 10, November
Next Issue
Volume 11, January
We use cookies on our website to ensure you get the best experience. Read more about our cookies here.
Accept
We have just recently launched a new version of our website. Help us to further improve by taking part in this short 5 minute survey here. here.
Never show this again