We study the resonant dipole–dipole interaction energy between two non-inertial identical atoms, one excited and the other in the ground state, prepared in a correlated Bell-type state, and interacting with the scalar field or the electromagnetic field nearby a perfectly reflecting plate. We suppose the two atoms move with the same uniform acceleration, parallel to the plane boundary, and that their separation is constant during the motion. By separating the contributions of radiation reaction field and vacuum fluctuations to the resonance energy shift of the two-atom system, we show that Unruh thermal fluctuations do not affect the resonance interaction, which is exclusively related to the radiation reaction field. However, non-thermal effects of acceleration in the radiation-reaction contribution, beyond the Unruh acceleration–temperature equivalence, affect the resonance interaction energy. By considering specific geometric configurations of the two-atom system relative to the plate, we show that the presence of the mirror significantly modifies the resonance interaction energy between the two accelerated atoms. In particular, we find that new and different features appear with respect to the case of atoms in the free-space, related to the presence of the boundary and to the peculiar structure of the quantum electromagnetic field vacuum in the locally inertial frame. Our results suggest the possibility to exploit the resonance interaction between accelerated atoms as a probe for detecting the elusive effects of atomic acceleration on radiative processes. View Full-Text
Keywords: dipole–dipole interaction; Unruh effect; quantum field theory in curved space dipole–dipole interaction; Unruh effect; quantum field theory in curved space
►▼ Show Figures 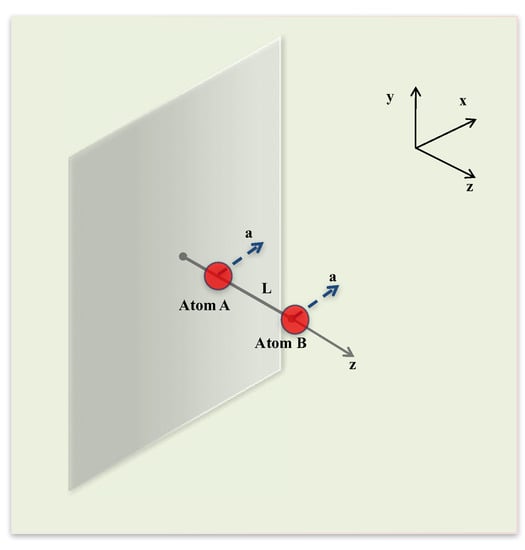