Insects are being produced at an industrial scale, mainly as feed ingredient to replace less sustainable protein sources in feed. Larvae of the black soldier fly (Hermetia illucens) are currently the most important species reared for this purpose. After production, it is necessary that the larvae be stored and transported in a stable way, i.e., without deterioration. In this study, we investigated fermentation and vacuum packaging technology as potential stabilisation techniques. Fermentation appears to be possible when the larvae are first blanched and pulverised, but bacterial endospores remain present and can potentially be dangerous if the conditions are not acidic enough. Vacuum packaging was tested as storage technique for living larvae, but their survival was lower than for living larvae packaged in air. Additionally, for killed larvae, vacuum packaging before chilling did not bring benefits over chilled storage alone. That was concluded from the fact that microbial counts were similar for larvae that were packaged in air or under vacuum during storage. 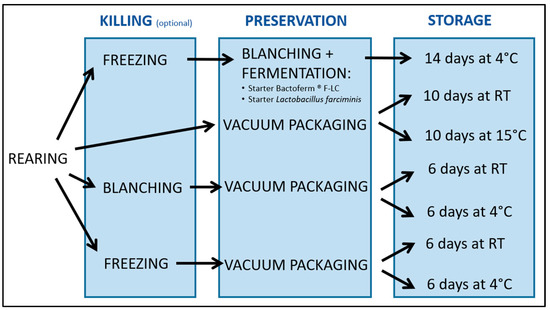