Epigenetic Regulation of the Non-Coding Genome: Opportunities for Immuno-Oncology

UV Radiation and Its Relation to DNA Methylation in Epidermal Cells: A Review

DNA methylation is the most studied epigenetic mark, and it can be altered by environmental factors. Among these factors, ultraviolet radiation (UV) is little explored within this context. While the relationship between UV radiation and DNA mutations is clear, little is known about the relationship between UV radiation and epimutations. The present study aimed to perform a literature review to determine the influence of artificial or natural (solar) UV radiation on the global and site-specific methylation profile of epidermal cells. A systematic review of the literature was carried out using the databases PubMed, Scopus, Cochrane, and Web of Science. Observational and intervention studies in cultured cells and animal or human models were included. Most studies showed a relationship between UV radiation and changes in the methylation profile, both global and site-specific. Hypermethylation and hypomethylation changes were detected, which varied according to the studied CpG site. In conclusion, UV radiation can alter the DNA methylation profile in epidermal cells derived from the skin. These data can be used as potential biomarkers for environmental exposure and skin diseases, in addition to being targets for treatments. On the other hand, UV radiation (phototherapy) can also be used as a tool to treat skin diseases. Thus, the data suggest that epigenetic homeostasis can be disrupted or restored by exposure to UV radiation according to the applied wavelength. View Full-Text
Keywords: DNA methylation; epigenetic; UV radiation; solar radiation; epidermis; epidermal; epimutation; skin; phototherapy; 5-mC DNA methylation; epigenetic; UV radiation; solar radiation; epidermis; epidermal; epimutation; skin; phototherapy; 5-mC
►▼ Show Figures 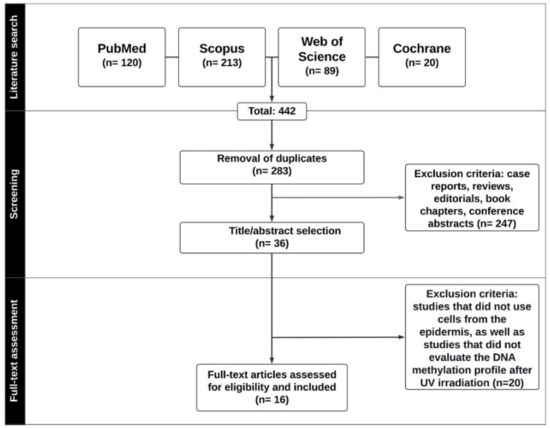