The present study aimed to assess the beneficial effect of acute carbohydrate (7% CHO) intake on muscular and cognitive performances. Seventeen high levels athletes in explosive sports (fencing and squash) participated in a randomized, double-blind study consisting in series of 6 sprints (5s) with a passive recovery (25s) followed by 15 min submaximal cycling after either maltodextrine and fructose (CHO) or placebo (Pl) intake. Cognitive performances were assessed before and after sprint exercise using a simple reaction time (SRT) task at rest, a visual scanning task (VS) and a Go/Nogo task (GNG) during a submaximal cycling exercise. Results showed a beneficial effect of exercise on VS task on both conditions (Pl: −283 ms; CHO: −423 ms) and on SRT only during CHO condition (−26 ms). In the CHO condition, SRT was faster after exercise whereas no effect of exercise was observed in the Pl condition. According to a qualitative statistical method, a most likely and likely positive effect of CHO was respectively observed on peak power (+4%) and tiredness (−23%) when compared to Pl. Furthermore, a very likely positive effect of CHO was observed on SRT (−8%) and a likely positive effect on visual scanning (−6%) and Go/Nogo tasks (−4%) without any change in accuracy. In conclusion acute ingestion of 250 mL of CHO, 60 min and 30 min before exercise, improve peak power output, decrease muscular tiredness and speed up information processing and visual detection without changing accuracy.
Keywords: CHO; maximal muscular performance; information processing CHO; maximal muscular performance; information processing

Seventeen high-level squash and fencing athletes (Table 1) (7 females and 10 males) volunteered in the study. Participants were used to training on a cycle ergometer and cycling as a normal part of their daily training program. The experimental procedures were explained to the subjects and a written informed consent was provided and signed prior to inclusion. The present study was approved by the University Ethics Committee.

One week before the experimental sessions, a preliminary testing was performed to collect anthropometric and physiological characteristics. Body weight was measured to 0.1 kg using a standard beam balance. Height was measured to 0.5 cm using a Holtain wall mounted stadiometer. In all subjects, four skinfold thickness (biceps, triceps, subscapular, suprailiac) were measured in triplicate, by the same trained observer. Measurements were made on the right-hand side of the body using a Holtain caliper. Body fat was calculated using the Siri equation. Maximal oxygen uptake (VO2max) was determined during a field maximal incremental exercise according to the protocol proposed by Léger and Boucher [28]. The speed of the last fully completed step corresponds to the maximal aerobic speed. During the test, oxygen uptake (VO2), carbon dioxide uptake (VCO2), minute ventilation (VE) and the respiratory exchange ratio (RER) were continuously recorded using a breath-by-breath analyzer (K4b2, Cosmed®, Rome, Italy) which was calibrated prior to each test. Heart rate was collected using a monitor (Polar RS800). Before and 3 min after running sessions, blood lactate concentrations were measured (LactatePro, Arkray Factory Inc., Shiga, Japan).
The target heart rate of the experimental sessions was determined from a competition simulation respectively in squash (5 players) and fencing (5 players) against a similar level opponent. For the squash simulation, 5 games of 11 points (1 for each players lasting between 8 and 13 min) were recorded and analyzed, whereas for fencing athletes, 5 matches of 3 min were recorded. From these records, the relative intensity was set at 80% of HRmax for fencing athletes and 85% FCmax for squash athletes.

Seventy-two hours prior to the first experimental session, subjects underwent a familiarization session with the repeated sprint effort protocol on a cycle ergometer and with the following cognitive tasks (CT): simple reaction time (SRT), visual scanning and Go/Nogo tasks (TAP software 2.3 version 3, P. Zimmermann and B. Fimm). For CT, the learning criteria was achieved when response variability was equal or less than 10% compared to the preceding cognitive performance.

Each subject participated in two counterbalanced experimental sessions separated by 1 week at the same time of the day. Subjects were instructed to keep a food diary during the 2 days prior the first session and to replicate this diet before each session. Subjects were required to refrain from alcohol, caffeine, drugs, and nutritional supplements during the 48 h prior the sessions. The last meal was taken at least 3 h prior the start of the experimental session. No food or drinks intake (except water) was allowed between the last meal and the experimental session. The subjects were not used to regularly drinking nutritional supplementation during training or competitions. They were instructed to control their time and hours of sleep the 2 nights preceding the experimental sessions. Light trainings were permitted in the morning of the experimental sessions whereas physical training (including endurance or resistance training) or high-intensity technical sessions were not allowed. Subjects were required to maintain the same training program every week during the experimental protocol.
During each experimental session, subjects ingested 60 min (Ing1) and 30 min (Ing2) before exercise either 250 mL of a 7% carbohydrate complex (CHO: fructose and maltodextrine, Isoxan Sport,) or placebo (Pl, 250 mL tap water added with orange sugarless syrup). Immediately after the second ingestion subjects performed the first cognitive tests block (i.e., CT). Then, subjects warmed up (standardized warm up) and after 3 min recovery performed, they performed a repeated sprint test in order to assess maximal power output. Immediately after this test, subjects completed one block of SRT. Finally, they performed a 15 min submaximal cycling exercise at 80% and 85% HRmax, respectively for fencing and squash athletes, during which they performed the visual scanning and Go/Nogo tasks (Figure 1).

Maximal power output was assessed during the repeated sprint test on a Wattbike cycle (Wattbike Pro, Nottingham, UK). This ergometer has been designed to simulate “real” cycling with a suitable power output range (0 to 3760 watts) for short-duration, high-intensity testing, or training, and has been previously validated to assess sprint performance in cyclists [29]. After a specific warm up for sprint performance, subjects performed 6 × 5 s sprints (S1 to S6), with a 25 s passive recovery between each sprint (the resistance was set at the minimum, resistance 1). Maximal power output was recorded for each sprint, and tiredness (%) was calculated using the difference between maximal power output for the best and the last sprint.

During the two experimental sessions, subjects were comfortably seated on the cycle ergometer facing a computer screen 1 meter away. Two joysticks were installed on the ergocycle. Participants were required to complete the CT that consisted in a series of 3 cognitive tasks (i.e., SRT, visual scanning and Go/Nogo tasks) before and after the series of 6 sprints. The SRT was performed at rest immediately after the sprints, and the visual scanning and Go/Nogo tasks were performed while cycling about 15 min at 80% and 85% HRmax respectively for fencing and squash athletes.

Simple reaction time is a perceptual-motor task indicative of the efficiency of the individual’s ability to process information. In the SRT task, subjects were asked to respond as quickly as possible to the visual known stimuli by pressing the button of a joystick with their dominant hand. The SRT task duration was about 3 min 30 s.

Visual scanning task (TAP 2.3 software) is an attention/perceptual task, during which subjects had to search a display for a given stimulus. The display was a matrix on a row-by-row or column-by-column basis (5 × 5 stimuli). Subjects were instructed to press one key response as soon as possible when they detected the target stimulus, and to press another key response when the target stimulus was absent. The visual scanning task duration was about 5 min.

The Go/Nogo task evaluates inhibitory control. Subjects were instructed to respond to stimuli and withhold the response to other stimuli. In the present version of the task (TAP 2.3 software), five squares with different patterns appeared on the screen. Two of these squares were defined as target stimuli. Subjects were instructed to press a key response as soon as possible when a target stimulus was presented, and withhold their response when a non-pertinent stimulus appeared. The Go/Nogo task duration was about 3 min.

Results were analyzed using consecutively quantitative and qualitative methods. All data are expressed as the mean ± standard error. For sprint performance (i.e., mean peak power and tiredness of 6 sprints), difference between conditions was assessed using a paired t-test. For cognitive performances, a repeated measures ANOVA (condition × period) was performed. Post-hoc Newman-Keuls analyses were conducted for all significant effects. Significance was set at p < 0.05 for all analyses. We also reported probabilistic magnitude-based inferences for all variables data using methods described by Hopkins et al. [30], which has been applied in several recent nutritional studies [14]. To compare within-trial changes between trials, we used a modified statistical spreadsheet. This spreadsheet calculates the between-trial standardized differences or effect sizes (ES, 90% confidence interval [CI]) using the pooled standard deviation. If the chance of benefit or harm were both >5% the true effect was reported as unclear. Otherwise, chances of benefit or harm were assessed as follows: <1%, almost certainly not; 1%–5%, very unlikely: 5%–25%, unlikely; 25%–75%, possible; 75%–95%, likely; 95%–99%, very likely; >99%, most likely [5].

An overview of the results for cognitive performance is shown on Table 2.

To summarize, the present data suggests that CHO ingestion enhances physical performance in high-level squash and fencing athletes during an intermittent high-intensity exercise, and has an additional positive effect on cognitive performances after exercise. Note that, the specificity of our high-level athletes can influence these results as it is generally assumed that attentional breadth continued to increase with higher physical exercise in contrast with non-athletes [53].

We thank all the subjects for participating to this study. Thank to Elliot Miller Henderson for the proofreading the final version of the manuscript. 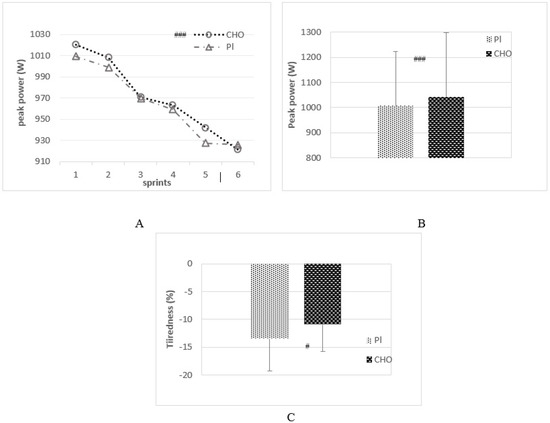 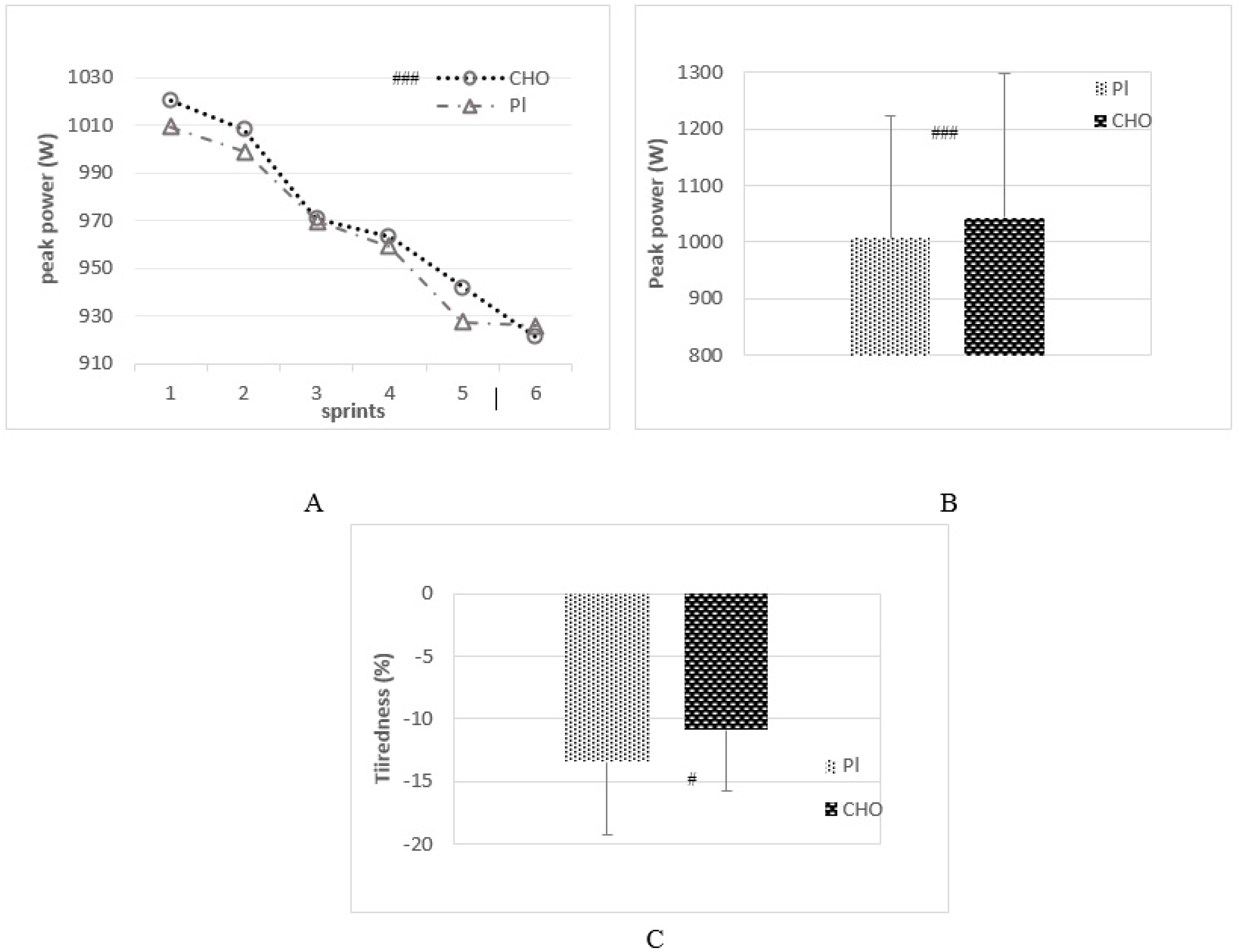