Anthropometric and Physical Performance of Youth Handball Players: The Role of the Relative Age

Background: The relative age effect is essential throughout all of the talent selection processes in sports, especially during adolescence, which leaves fewer athletes within each cohort that are born late in the selected year. The aim of the present study was to examine the role of relative age in anthropometric and physical performance characteristics of youth handball players by gender. Methods: The sample that was selected included 47 participants (male n = 23, female n = 24). The data collection included anthropometric, body compositions parameters, and physical performance levels. Results: There was a significantly higher representation of players in the first semester in comparison with the second semester, for all of the gender groups, except for the selected male players. In males, statistically significant differences were found in height, sitting height, weight, wingspan, arm and leg circumferences, and in throws speed (in support and in suspension) between those players that were born in the first and second semester. Conclusion: The results confirmed an effect of relative age in the players born in 2002 that were selected to participate in the Spanish Championship, which was different for males and females. In spite of this effect, which only appeared in females, significant differences in the anthropometric and physical conditions appeared in the male players. View Full-Text
Keywords: birth date distribution; team sport; youth sports; development; dropout birth date distribution; team sport; youth sports; development; dropout
►▼ Show Figures 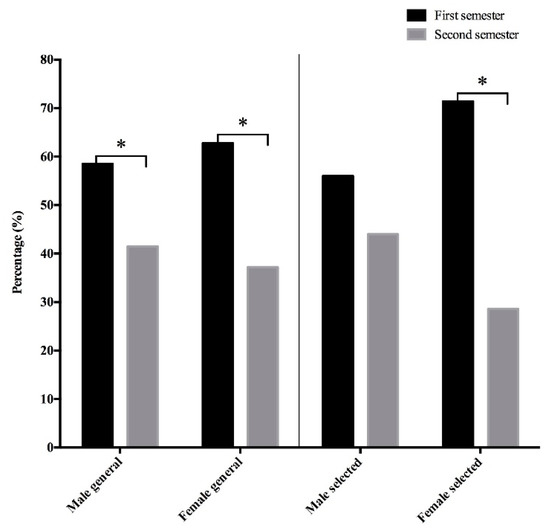