Influence of Training Load on Mood Disturbance at Sea Level and 3900 m Altitude: A Case Study of a Wheelchair Athlete
Next Article in Special Issue

Heart Rate Variability Responses to an Undulating Resistance Training Program in Free-Living Conditions: A Case Study in a Collegiate Athlete

The purpose of this case study was to evaluate the response in heart rate variability via the parasympathetically-mediated metric of the log-transformed root mean square of successive R-R interval differences (lnRMSSD) to weekly variations in total volume-load (TVL) during an 18-week periodized strength training program in a competitive collegiate hockey athlete. The program consisted of three 60–90 min full-body exercise sessions per week with at least 24-h of rest between each session. Daily lnRMSSD measurements were taken immediately after waking using a validated smartphone application and the pulse-wave finger sensor. The weekly lnRMSSD values were calculated as the mean (lnRMSSDMEAN) and the coefficient of variation (lnRMSSDCV). A Pearson’s bivariate correlation of lnRMSSDMEAN and TVL revealed no statistically significant correlation between the two variables; TVL (r = −0.105, p = 0.678). However, significant correlations were found between lnRMSSDCV and both total load (TL) (r = −0.591, p = 0.013) and total volume (TV) (r = 0.765, p < 0.001). Additionally, weekly ratings of perceived exertion (RPE) mean values were statistically significantly correlated to TVL, r = 0.853, p < 0.001. It was concluded that lnRMSSDCV increased or decreased proportionally to an increase or decrease in TVL during the periodized resistance training program with TV being the strongest, independent indicator of these changes. View Full-Text
Keywords: heart rate variability; coefficient of variation; strength training heart rate variability; coefficient of variation; strength training
►▼ Show Figures 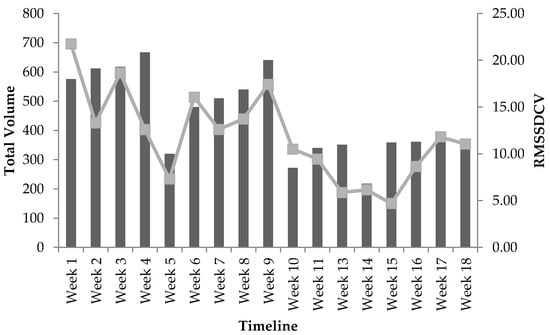